In October 1972, Gene McFadden, an Indianapolis urban planner, and community development specialist, initiated the movement to enlist a Canadian counterpart willing to compete in a multisport event similar to the Olympics. McFadden found George Churchill of Brantford, Ontario, who helped organize a similar event between Brantford and Perrien, Michigan. On McFadden’s request, Churchill contacted Canadian cities he thought may be interested in participating. Scarborough, Ontario, director of recreation Jack Keay responded first. 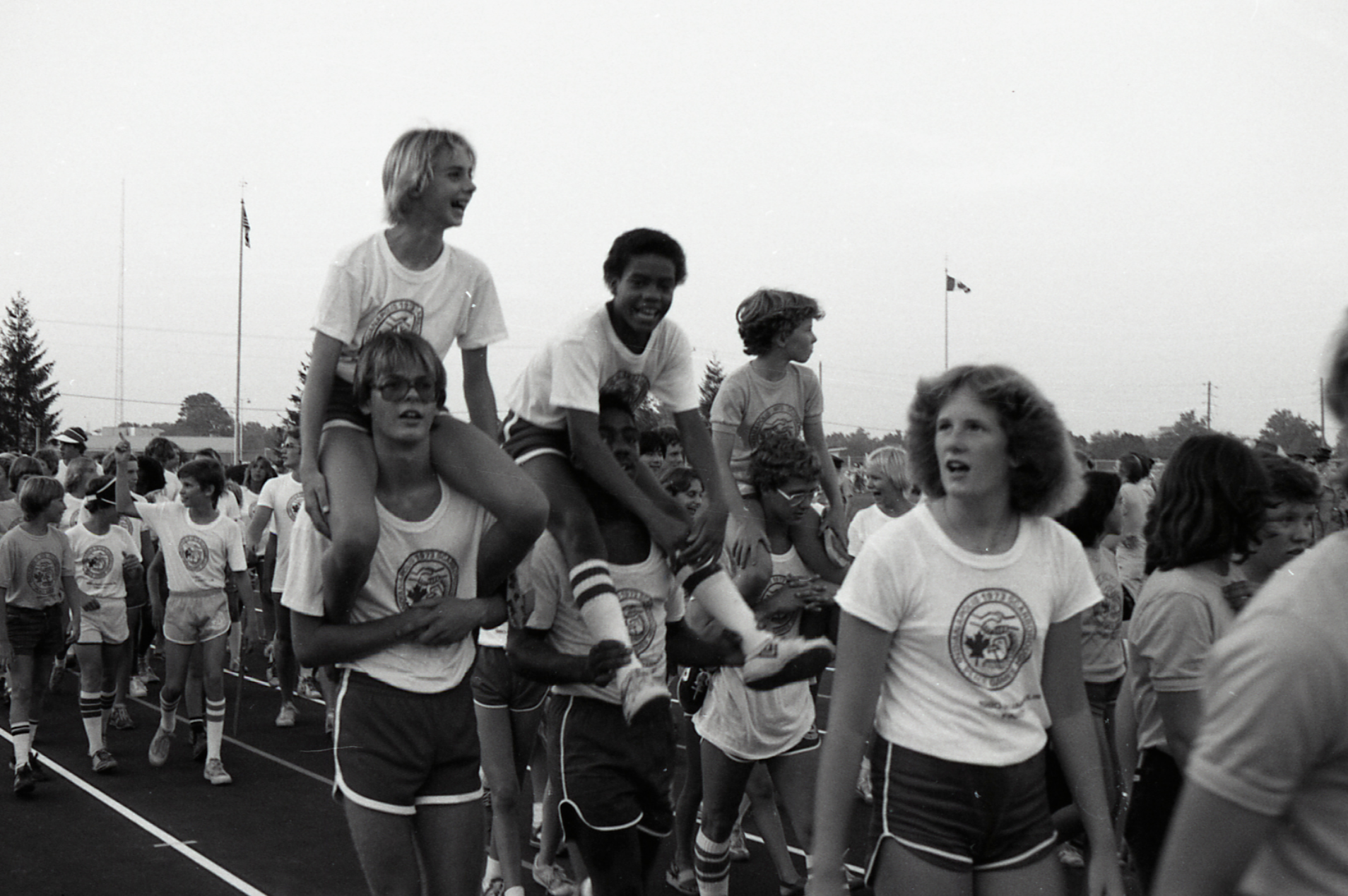 Participants march in the opening ceremonies of the Scarborough Peace Games, held in Indianapolis in Aug. 1980.
Credit: University of Indianapolis
View Source

On January 27, 1973, Indianapolis and Scarborough officially agreed to conduct an annual multi-sport, international athletic competition. The event was named the Indianapolis/Scarborough Peace Games in honor of the Vietnam Peace Treaty which was signed that same day. The purpose of the games, held annually during the second week of August, was to promote friendship and cultural understanding between the residents of the two cities.

Beginning with the first Peace Games in 1973, the event was held every other year in Indianapolis, with Scarborough hosting in alternate years. During the competition, visiting athletes stayed in the homes of the host city’s participants. Approximately 800 athletes from each city competed in 15 sports: athletics (cross country and track), badminton, baseball, basketball, bowling, chess, bicycling, horseshoes, soccer, softball, swimming, table tennis, tennis, volleyball, and wrestling. 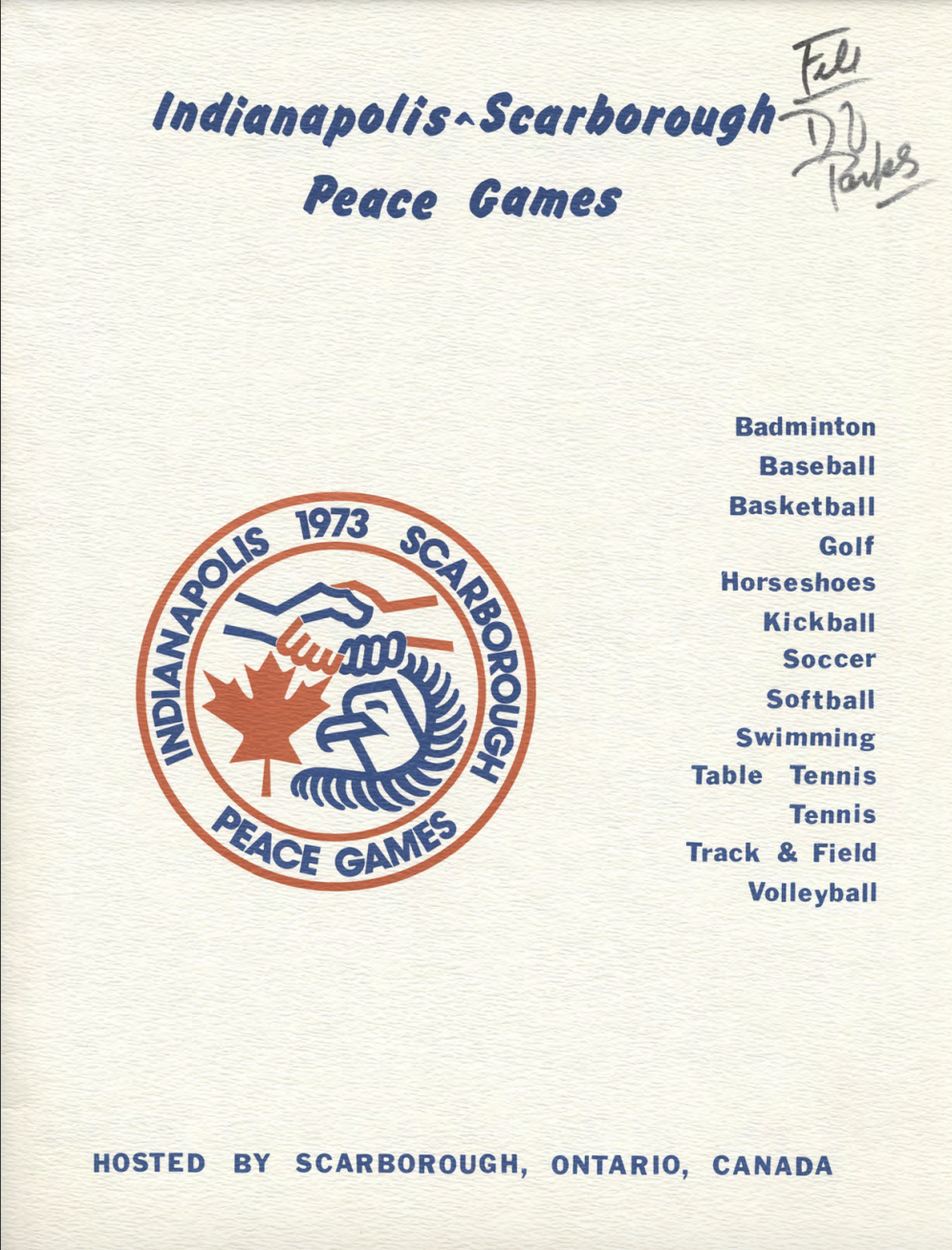 Each year, approximately 5,000 Indianapolis-area residents of all skill levels, from former college athletes to beginners, competed in the local preliminaries. Anyone was allowed to compete, but only Marion County residents could qualify for the international competition with Scarborough. Local competition began in April and continued for approximately four months until the top teams and top three finalists in each sport and age group emerged.

The Indianapolis Department of Parks and Recreation organized and conducted the Peace Games, with the event funded by the parks department, corporate sponsorships, and athletes’ entry fees. However, the cost of hosting and transporting athletes became a recurring problem after the second year. The Indianapolis team had major funding, including corporate sponsor eli lilly and company, but Scarborough’s team relied on small donations from local businesses and sports associations. Despite the Games’ popularity among participants, it struggled to garner much publicity.

Lugar holds a ceremonial torch during the opening of the Indianapolis-Scarborough (Ontario) Peace Games (1972).
Credit: University of Indianapolis
View Source

The goodwill fostered by the cities peaked in 1996 with the signing of a sister city agreement. The pact lasted only until 1998 when East York, Etobicoke, North York, Scarborough, and Toronto combined to form the current City of Toronto with its own sister cities.

The Games ended in 2005. In 2003, the international competition was canceled due to cases of Severe Respiratory Syndrome (SARS) reported in Toronto where the competition was to take place. The final Indianapolis-Scarborough Peace Games took place in 2004, with the international competition held in Scarborough. Declining participation and economic support factored heavily when, in 2005, both cities decided to end the Games. From 1973-2004, over 50,000 participants traveled across the borders, stayed with peers, engaged in competitive sports, and built friendships.