In part a response to the “City Beautiful” ideal popularized by the 1893 World’s Columbian Exposition in Chicago, Indianapolis initiated a number of expansions and improvements in its city parks around the turn of the 20th century. With the idea of reserved greenspace came the notion of attractive thoroughfares, usually winding alongside streams, connecting various points within the town. The thoroughfares were intended to be largely recreational, providing pleasant drives around the city with occasional benches and suitable picnic spots.

The prospect of a boulevard following Fall Creek from Capitol Avenue to the then-new Indiana State Fairgrounds on Maple Road (38th Street) arose as early as 1901 in discussions of the Indianapolis Board of Park Commissioners, itself only in its seventh year. By 1906, Fall Creek Boulevard was completed between Capitol and Central Avenue, as was most of a section of Pleasant Run Boulevard (later Parkway) between Raymond and Beecher streets. Other boulevards in progress were along the levee on the east bank of White River north of Michigan Street, and another northward through Riverside Park from the stone dam, near where the Emrichsville Bridge had recently been built, to 30th Street. From the beginning, Indianapolis planned parks for its boulevards. City engineers did not lose sight of this link in succeeding decades, thereby seeking and ultimately achieving, to a degree, a true system of wide parkways with broader intermittent expanses of parks like green beads on a cord.

The original park boulevard plan was the work of George E. Kessler, a landscape architect hired by the park board. Among the plan’s most enthusiastic proponents was Dr. Henry Jameson, who became chairman of the park board in 1908. Among other things, he successfully urged that the location of the new St. Vincent Hospital be moved back several hundred yards from its originally planned spot on the bank of Fall Creek, thus allowing space for the boulevard and streamside improvements. 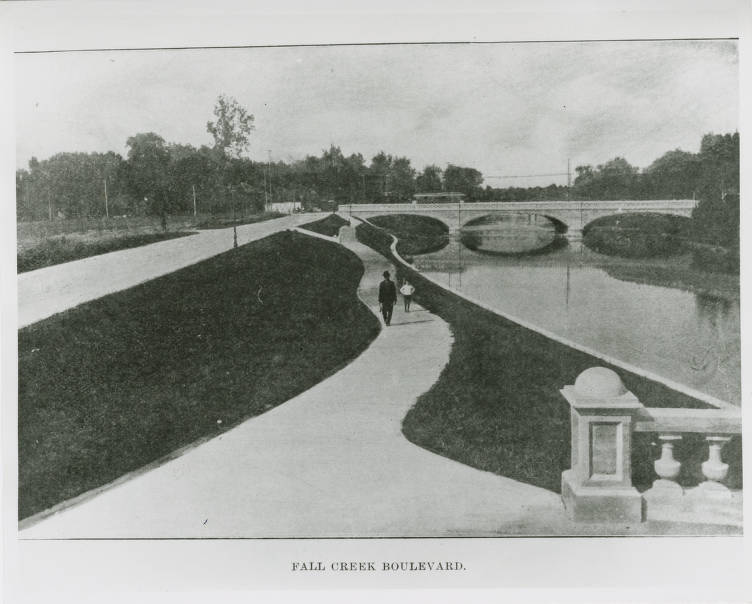 The construction of Fort Benjamin Harrison in 1906 brought a proposal from the federal government to build a boulevard connecting the army post with the city. The park board suggested it could easily be an extension of Fall Creek Boulevard. Ultimately, the plan came to fruition in the 1930s, when workers of the Federal Emergency Relief Administration and Works Progress Administration fulfilled the dreams of the early park planner and completed lengthy stretches of Fall Creek Parkway, Pleasant Run Parkway, Riverside Drive, and Kessler Boulevard.

As the city rapidly expanded after World War II, some advocates, such as Mayor Philip Bayt in the late 1950s, urged the creation of a parkway along lower Eagle Creek on the west side of the city. At the same time, many of the neighborhoods along Fall Creek were beginning to change and the parkway, with its picnic shelters and benches placed all along the creek, began to deteriorate.

In the 1980s, the city undertook a massive Fall Creek restoration program, the most noticeable result of which was the beautification of the parkway upstream from State Road 37 along the stream’s north bank.

The Indianapolis Park and Boulevard System includes 3,474 acres bounded by 38th Street and Emerson, Southern, and Tibbs Avenues with extensions on Fall Creek and Pleasant Run Parkways to Shadeland Avenue. It was made up of 12 parks, 6 parkways, and the historic fall creek parkway bridges. The system served as the backbone and the inspiration for the Indianapolis Greenways and trails system.