Until the 1890s most medical education in the United States occurred at private, proprietary schools. University-based schools with access to state funding and endowments became the model for medical education, with Johns Hopkins University leading the way in 1893. Indiana University joined the movement in 1903 when new university president William Lowe Bryan established the first two years of basic science courses in Bloomington and began negotiations with proprietary schools in Indianapolis for clinical instruction using hospital facilities there (see Medical Schools). 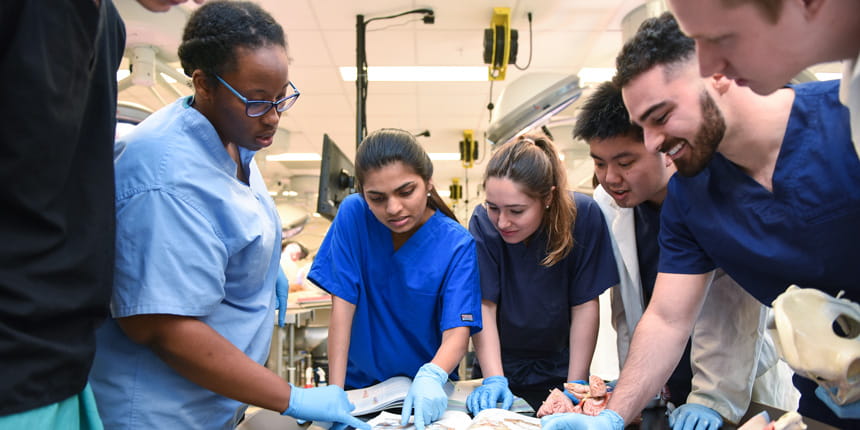 In 1908 after five years of contentious battles with those schools as well as Purdue University, the Indiana Medical College and two other proprietary schools merged with IU’s program at Bloomington and moved into the building of the former Medical College of Indiana, which had opened as a proprietary school in 1869.  Initially, both programs continued (two years of instruction in Bloomington and four years in Indianapolis),  but this changed in 1911 to only the first year at Bloomington, an arrangement that lasted until 1959. Indiana University had the only medical school in the state until Marian University opened the College of Osteopathic Medicine was opened in 2013.

allison w. maxwell, who headed one of the former proprietary schools, became the first dean of the medical school in Indianapolis in 1908, but he was soon succeeded by Charles P. Emerson (1911-1932). During Emerson’s tenure, the school took its present shape, beginning in 1911 when the General Assembly accepted local physician Robert Long’s offer to provide funding for a new hospital. A site near the City Hospital was selected, and these two facilities provided most of the clinical instruction for medical students. Ironically, this location was originally swampland and considered the unhealthiest part of the city, but at the time hospitals like City Hospital were primarily charity institutions and were often located near the populations they served. The area near the site of the new hospital included some of the poorest residents of the city.

The new Long Hospital opened in 1914, and in 1919, shortly after the Medical College Building burned down, a new Medical Education building (later renamed Emerson Hall) was completed across from Long Hospital, thus establishing the site for what became a greatly expanded school and medical center.

By 1920, the freshman class reached 100 students, comparable to some of the largest medical schools in the country. In 1924 the James Whitcomb Riley Hospital For Children opened as the state’s only children’s hospital. The Coleman Hospital for Women opened in 1927, the first hospital in Indiana built exclusively for obstetrics and gynecology. Emerson devoted great energy and resources to a pathbreaking medical social service program, a forerunner of what eventually became the School of Social Work. In addition, he established the IU Training School for Nurses in conjunction with the new Long Hospital, which eventually became the IU School of Nursing in 1956. During the tenure of willis dew gatch as dean (1932-1946), the school expanded the facilities of Long Hospital and brought the Indiana State Board of Health to the campus. School enrollment increased, and Gatch greatly expanded residency opportunities for graduates.

It was not until the appointment of john d. van nuys (1947-1964) that IUSM had its first full-time dean. There was a major increase in outside grants for research and clinical buildings, including major expansion at Riley Hospital in the 1950s for research on children’s diseases and disabilities and innovative health care delivery methods. Even more significant was the opening of the Medical Science Building in 1958 (later renamed Van Nuys Hall), which provided space for laboratories and research facilities plus lecture halls and library facilities. This development permitted the long-sought goal recommended by outside reviewers to consolidate all four years of medical school study in Indianapolis.

Many specialized research centers emerged beginning in the 1960s, including those for cancer, arthritis, diabetes, psychiatry, hypertension, medical genetics, alcoholism, Alzheimer’s disease, general clinical research, and sexually transmitted diseases. The Krannert Institute of Cardiology, created in 1963, developed an international reputation for its cardiovascular research. The Division of Allied Health Sciences was established in 1959, consolidating instruction that had grown in previous decades in such health care occupations as physical therapy, radiography, nutrition, and laboratory technology.

Under Glenn Irwin’s leadership (1965-1974) the first phase of the new University Hospital opened (1970) and IUSM initiated an extensive curriculum revision, the “Indiana Plan.” Just 10 years after consolidating instruction in Indianapolis, the IUSM responded to calls for a second medical school by successfully lobbying the state to establish the first 2 years of medical school for half the students at eight centers around the state. The other half were taught in Indianapolis, plus all students were taught there during the last 2 years. At this same time (1969) the IUSM became the core of the new Indiana University-Purdue University (IUPUI) campus. Irwin became the second chancellor of IUPUI in 1975, and the medical school became part of a comprehensive research university campus that eventually developed 17 different schools.

steven c. beering became the sixth dean of the IUSM in 1975. During his term, he implemented the establishment of the statewide plan and oversaw the entry of the first significant numbers of women into the medical school as students and faculty. By the late 1980s, the entering class numbered 280 students. The second phase of University Hospital was completed before Beering left to become President of Purdue; he also oversaw the expansion of research such as the Regenstrief Health Center, which studied improvement in the delivery of health care.

Walter Daly became dean in 1983. A major new addition to Riley Hospital was completed in 1986, plus a new Medical Research and Library Building in 1989, funded largely by a new office of fundraising development. In 1992 a major new outpatient wing was opened in University Hospital, consolidating campus-wide ambulatory health services. During this period, IUSM developed a practice plan for the rapid expansion of clinical patient care by faculty after the creation of Medicare and Medicaid.

Daly’s last project was negotiating the Clarian Health partnership between University Hospital, Riley Hospital, and Methodist Hospital Of Indiana. The complicated implementation of this consolidation was overseen first by Dean Robert Holden and then D. Craig Brater who became dean in 2000. Research continued to expand, thanks to the growth of National Institutes of Health and other government funding, as well as great philanthropic efforts by the lilly endowment, inc. ($155 million for the INGEN project), and the Simon family ($50 million Cancer Center and $40 million Riley Tower). Brater also oversaw the expansion of the statewide instruction centers beginning in 2008 to include additional students and four years of the curriculum. The 2019 entering class of IUSM was 363 students, the largest in the country.

Indiana University School of Medicine The medical school is located on the IUPUI campus at 340 West 10th Street.

In the early 1800s, philanthropic interest in health was ...Read More »