Indiana School for the Deaf

In 1843, the Indiana General Assembly enacted a property tax to finance the education and housing of the state’s deaf population. At this same time, william willard who had taught at the Ohio School for the Deaf in Columbus for 10 years, came to Indiana with the intention of starting a private school. Although the Indiana General Assembly had paid James McClean, a deaf man from New York, to teach a handful of children in Parke County, Willard managed to gain favor with the legislature and reportedly spent summer 1843 traveling the state on horseback to find deaf students.

Willard’s school opened in October 1843 in rented quarters with twelve deaf pupils. He taught them using American Sign Language. At first, he paid his own expenses, but on January 14, 1844, the Indiana General Assembly passed an act that made it an official state institution. The school then became known as the Indiana Asylum for the Deaf and Dumb. Tuition at the school was free, and boarding cost $1.50 per week. The Indiana School for the Deaf was the sixth school of the deaf founded in the United States but the first to provide free tuition.

Willard officially served as the school’s first principal. In 1846, the Indiana General Assembly replaced Willard with James S. Brown, who could hear and speak. Members of the legislature mistakenly believed that a deaf person was not capable of administering the institution. Despite this injustice, Willard taught at the school until he was forced to retire in 1864. 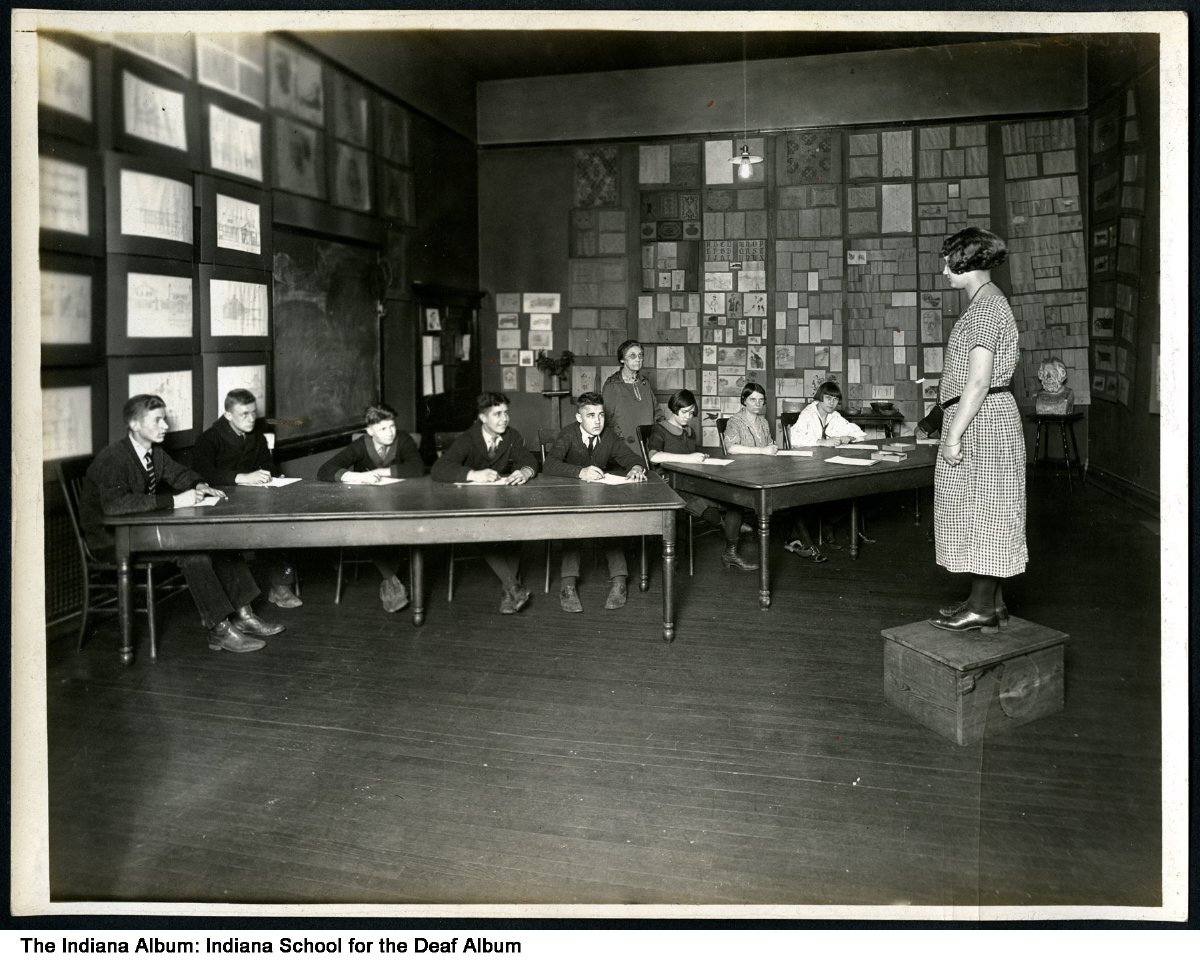 In 1849, the state hired architect Joseph Willis to design and build the first permanent residence of the asylum, which opened in 1850. Colonel Andrew Brouse completed the construction the following year. The finished asylum, located east of the Mile Square (Washington Street and State Avenue), consisted of two stucco buildings constructed in the popular Greek Revival style.

The buildings were classic examples of public buildings of their period. The main building was 265 feet long with a five-story center section and two recessed, three-story wings ending with projecting four-story wings. It had a slate roof, Doric columns, and a copper-roofed portico. An octagonal cupola, also roofed in copper, sat atop the building. Behind this main edifice was the two-story Greek revival building that housed the schoolrooms and chapel.

In 1905 plans were drawn up for a new school to be located at 1200 East 42nd Street, its present location. The campus consisted of 80 acres that were primarily covered in forest. The school developed some farmland, a fruit orchard, and a dairy facility on the east side of the property that it operated for many years.

The Indianapolis architectural firm of Rubush And Hunter designed this campus, which opened in 1911. The Indiana School for the Deaf and Hearing Impaired is significant as the only known campus that the firm designed. Rubush and Hunter’s original plan called for 22 buildings. Seven of these buildings were completed. One and two stories tall, each of these was constructed in an Americanized French design of red brick laid in red mortar. 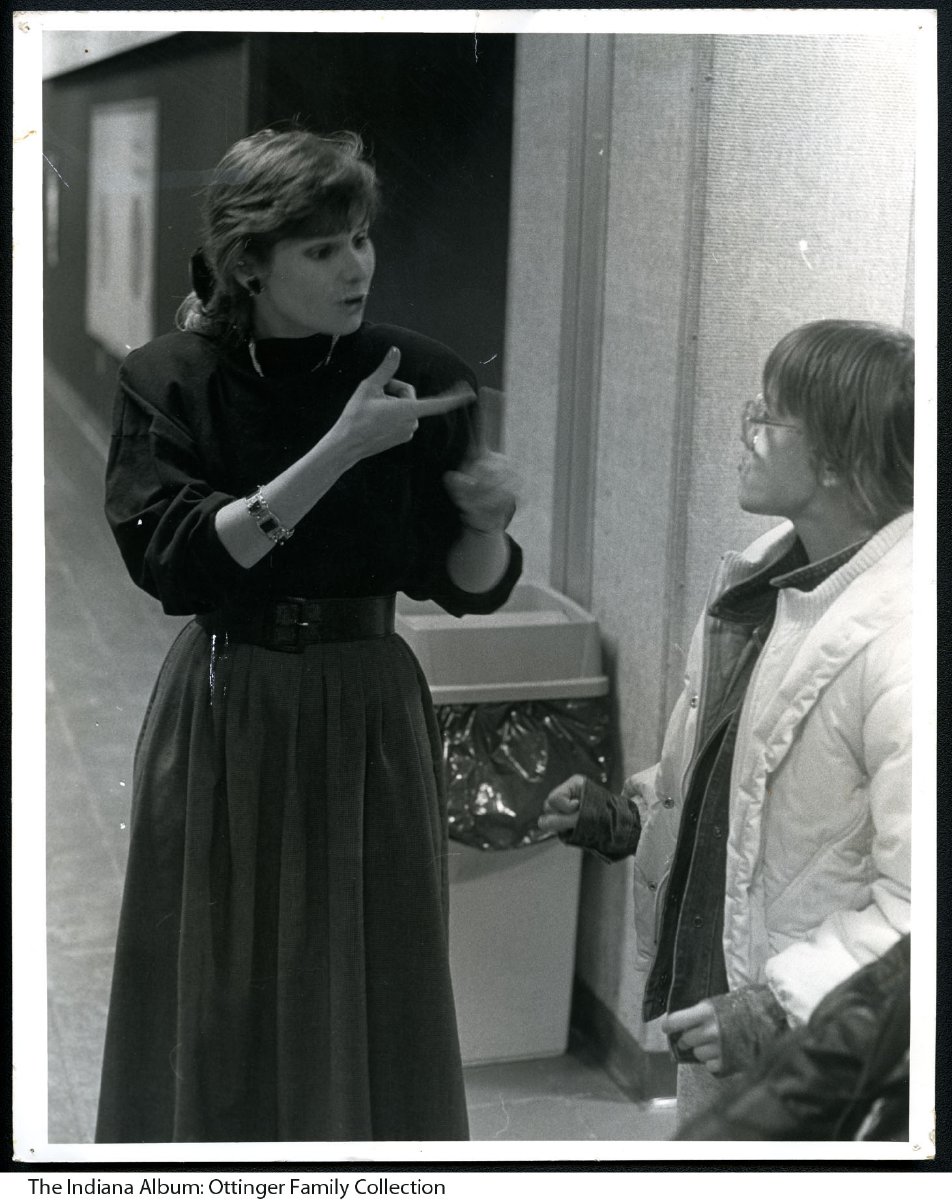 Woman and girl at the Indiana School for the Deaf, ca. 1991
Credit: The Indiana Album: Ottinger Family Collection
View Source

Rubush and Hunter laid these buildings out in the form of a quadrangle. The main school building, later known as Alumni Hall, faced south. Matching separate dormitories for male and female students faced each other on the east and west. A dining hall and hospital building (Beecher Hall) were built on the south side. Three service buildings were located outside the quadrangle, the powerhouse, the laundry, and the vocational building, to the rear of the complex. Each building had stone trim and a red tile roof. After the new school opened in 1911, the school sold its Washington Street property, which would later become Willard Park, named in honor of William Willard.

The boys’ dormitory, also known as Johnson Hall, was demolished in 1983 to make way for a new coed dormitory. At this time the girls’ dormitory (Simpson Hall) was sealed because of issues with asbestos. In 1991, the Indiana School for the Deaf was listed on the National Register of Historic Places. Plans to revive Simpson Hall never reached fruition. Indiana Landmarks and other preservation advocates tried to save the building. They lost this battle in 2019. As of 2020, ISD’s unique historic campus posed challenges because other remaining buildings needed major upgrades and repairs.

In March 2022 state officials decided to move ISD to the Indiana School for the Blind and Visually Impaired as part of a $225 million upgrade of both programs’ facilities. The two schools will remain separate but they can share resources with building renovations and new construction on the blind school site.

ISD offers educational programming starting with infants through high school. ISD works with parents of infants closely before they reach the age of 18 months. At this point, children are enrolled as official ISD students. As it has from the time of its founding, ISD provides residential housing to students who live too far away from campus to be day students. It also offers multiple extracurricular activities, including several team and individual sports. In 2011 and 2014, ISD won best deaf school in America.

Indiana School for the Deaf The school is located at 1200 East 42nd Street near the Indiana State Fairgrounds.