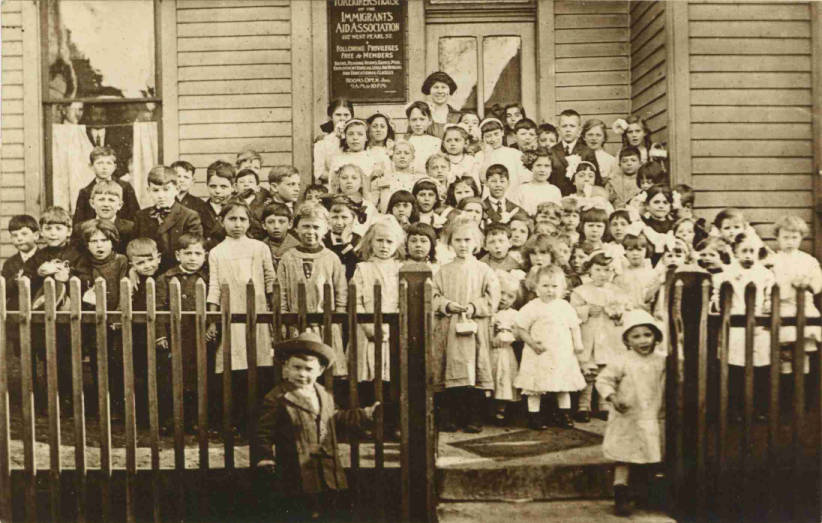 Although foreigners comprised only 8 percent of the Indianapolis population at the time, in the 13th ward they made up one-third, and civic leaders associated this unassimilated alien community with crowding, crime, and disease. The association’s efforts for the foreign-born combined protection and coercion: it worked to counteract the influence of the saloon and to eradicate fraudulent savings banks and straw bondsmen who exploited the aliens. It also sought to counteract socialist influences and to integrate the aliens into American life.

In October 1911, the association opened a settlement, Foreign House, at 617 West Pearl Street. About 60 men a night attended the Foreign House night school, which was staffed by students from the Disciples of Christ Missionary College. In 1913, the association hired social worker Ellen P. Hanes to work with immigrant families and started a kindergarten and classes in English and domestic science.

The settlement functioned simultaneously as a social service agency and an agency of Americanization and Protestant evangelism. However, cultural events and ethnic festivals drew large crowds so that the settlement also helped to keep immigrant culture and customs alive. With the outbreak of the Balkan Wars (1912-1913), the Foreign House went into decline as many foreigners returned to their homelands. Its Americanization and other programs would be taken up vigorously again after 1923 when it was renamed American Settlement and later the mary rigg Neighborhood Center.