Hospital guilds have raised funds and coordinated volunteer activities for all the hospital systems in Indianapolis. Guilds have operated gift shops, conducted bazaars, and held special events such as charity balls to raise millions of dollars since their founding.

A gendered pattern emerged over time in healthcare and hospitals, with men holding power and professional positions and a significant female staff and volunteers doing the day-to-day work. This held true in Indianapolis. In the 19th century, even if women served in mixed-gender organizations or ran auxiliaries in parallel to men’s associations, they served in support roles to their male counterparts.

The Local Council of Women, founded in 1892 and comprised of 34 women’s organizations in the city, facilitated communication, and collaboration among women. The Council encompassed women’s involvement at the turn of the 20th century in literary clubs, missionary and church societies, ladies’ auxiliaries, and charities such as Flower Mission, Indianapolis Free Kindergarten, Hebrew Ladies’ Benevolent Association, Home for Friendless Women, and the Orphans’ Home. The first hospital guild formed during this time, the peak of the club movement. 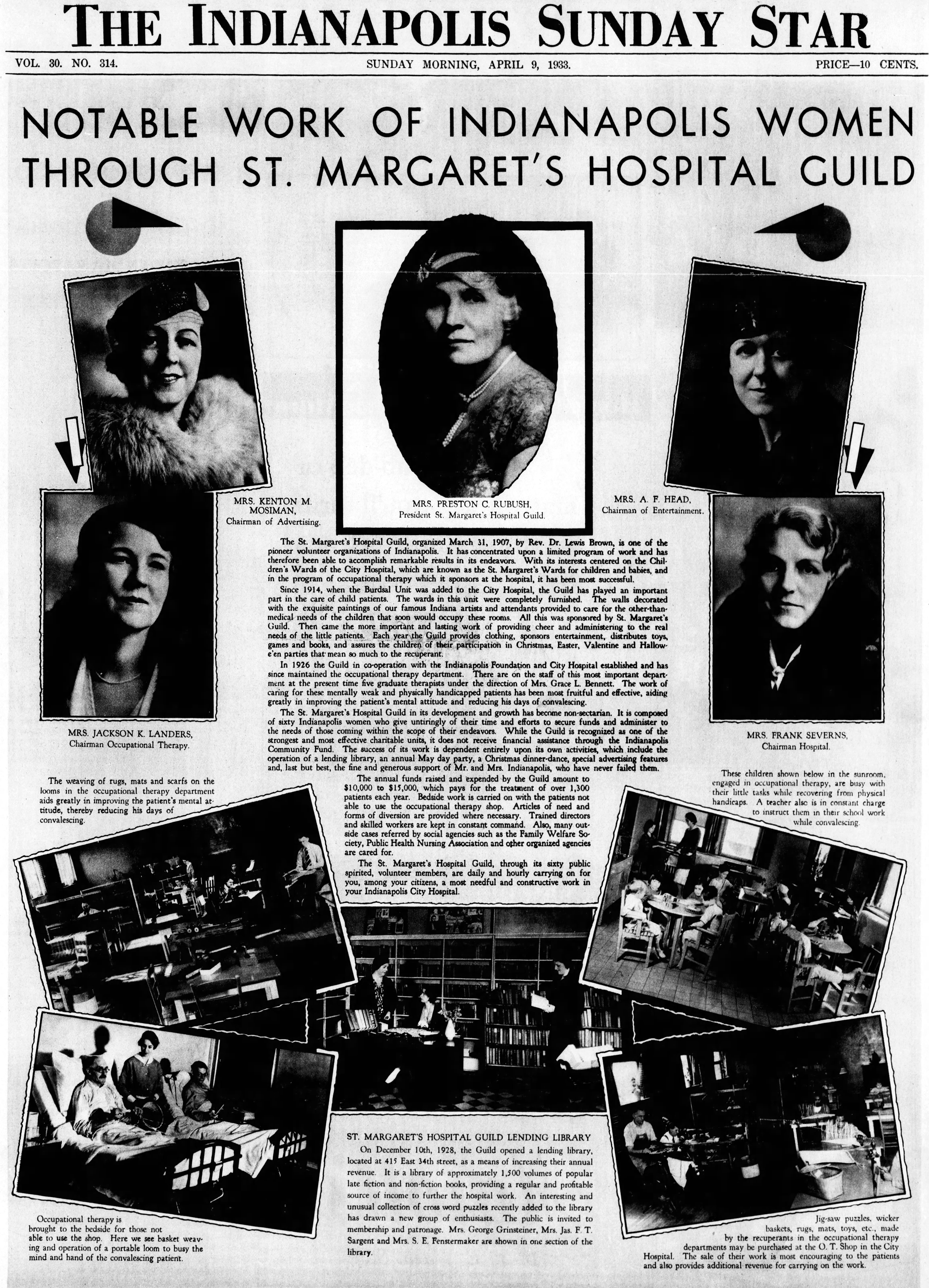 The oldest and best-known hospital guild in Indianapolis, St. Margaret’s Hospital Guild, began on Christmas Day 1907, to call on patients in City Hospital and Deaconess Hospital. The Reverend Doctor Lewis Brown, rector of St. Paul’s Episcopal Church, and five women of the congregation formed the St. Margaret’s Guild in 1908.

When new City Hospital adult and pediatric wards opened in 1914, the design was based on function over patients’ privacy or comfort, with wide-open corridors flanked by rows of beds. The stark, bright white atmosphere inspired him to decorate the new wards. The guild, the Board of Health, and other private donors together funded public art inpatient wards and dayrooms. Thirty-three murals and paintings from 16 Indiana artists, including the well-known T.C. Steele—a remarkable quarter-mile of artwork in all.

The Guild sponsors its signature event the annual Decorators’ Show House, which debuted in 1962, the first of its kind in the U.S. Guild members have contributed millions of dollars and thousands of volunteer hours in services. Projects have ranged from renovations, ambulance services, wellness initiatives, and book carts.

The Riley Children’s Cheer Guild formed with the 1924 opening of James Whitcomb Riley Hospital For Children. One hundred women formed the guild to donate the library, toys, and other supplies for the hospital’s opening. The guild today operates gift shops, manages in-kind donations, runs the Toy Room program, and raises over $500,000 annually for the hospital.

Methodist Hospital’s White Cross Guild began in 1932 with 80 charter members. The White Cross Guild evolved from an earlier guild of women who had been sewing and rolling bandages for the hospital. A variety of projects supporting Methodist Hospital followed, including fundraising, holiday programs, a library for patients and staff, support for student nurses, and a music guild. White Cross members raised funds to support families financially, called Tiny Tim, and produced a Depression-Era cookbook in 1937. Luella Mcwhirter served as the guild’s second president during the 1930s. Volunteer fundraising is now part of the Indiana University Health Foundation, formerly the Methodist Health Foundation.

The St. Vincent Hospital Guild was founded in 1933 with 22 charter members when the hospital was located at Fall Creek Center. The Guild raised funds, ran holiday bazaars, and supported volunteers. The St. Vincent Foundation, created in 1968, supports the hospitals by managing volunteer programs and coordinating giving programs.