The Hindu Temple of Central Indiana was the first traditional Hindu temple to be built in Indiana. During the 1980s and 1990s, there were barely enough people practicing Hinduism in Central Indiana to warrant the organization of a Hindu Temple. Although some people discussed building a temple as early as 1982, those conversations were short-lived due to proximity to temples in Dayton, Ohio, and Chicago.

Before the creation of the Hindu Temple of Central Indiana (HTCI) most Hindus in the area worshipped at the India Community Center (ICC), built in 1985. Central Indiana Indians attended weddings, birthdays, lectures, funerals, and religious ceremonies at the ICC. Some area Hindus continued to travel to Dayton or Chicago to celebrate the holiest Hindu holidays. There they found ornately decorated Hindu temples reminiscent of those found in India. But for weekly prayer, the ICC facility served the community well.

Opposition to worshiping in the ICC grew intense after it began renting its facility to the public. The decision to build a separate center for worship had overwhelming community support for two reasons. Central Indiana Hindus needed a place to strengthen their spirituality together as an Indianapolis Hindu community rather than as part of either the Dayton or Chicago communities. They also did not want to share their venue with non-worshipping patrons.

About 250 people gathered to plan the construction of what would become Indiana’s first Hindu Temple. From this group emerged six families who pooled together enough funds to purchase land at 3350 German Church Road. Twenty-six people formed the board of directors, who decided construction would take place in three phases.

During the first meeting, the board firmed up three critical aspects that established the destiny of the temple. They decided which deities would grace the interior, the directional position of each deity, and the physical representation of each deity.

Deity selection was abundantly important. Hindus believe in one God manifested in different ways, called deities. Each region in India has its own deity. The board envisioned having as many deities as there were regions in India from where Central Indiana Hindus hailed. Furthermore, each deity needed its own unique shrine.

To avoid splintering the religiously and ethnically diverse group of Indians living in Central Indiana, the board determined that 17 deities would have a home in the temple. Shrines for Ganesha, Ayyappa, Hanuman, Subrahmanya, Jagannath, Durga, Shiva, Mahavir, Saibaba, Saraswati, Venkateswara, Andal, Lakshmi, Parvati, Rama, Krishna, and Navagrahas would ensure both diversity and a sense of unity within the larger Indian community.

The official inauguration day of phase-one construction occurred on Sunday, February 5, 2006. After a blessing and purification ceremony, the ICC presented the HTCI with a statue of Radha Krishna which had resided inside the ICC for the past 20 years.

The “box” structure built in 2006 barely accommodated the growing Hindu population. Though functional, its spartan interior with only one religious statue left the Hindus ready to start phase two. 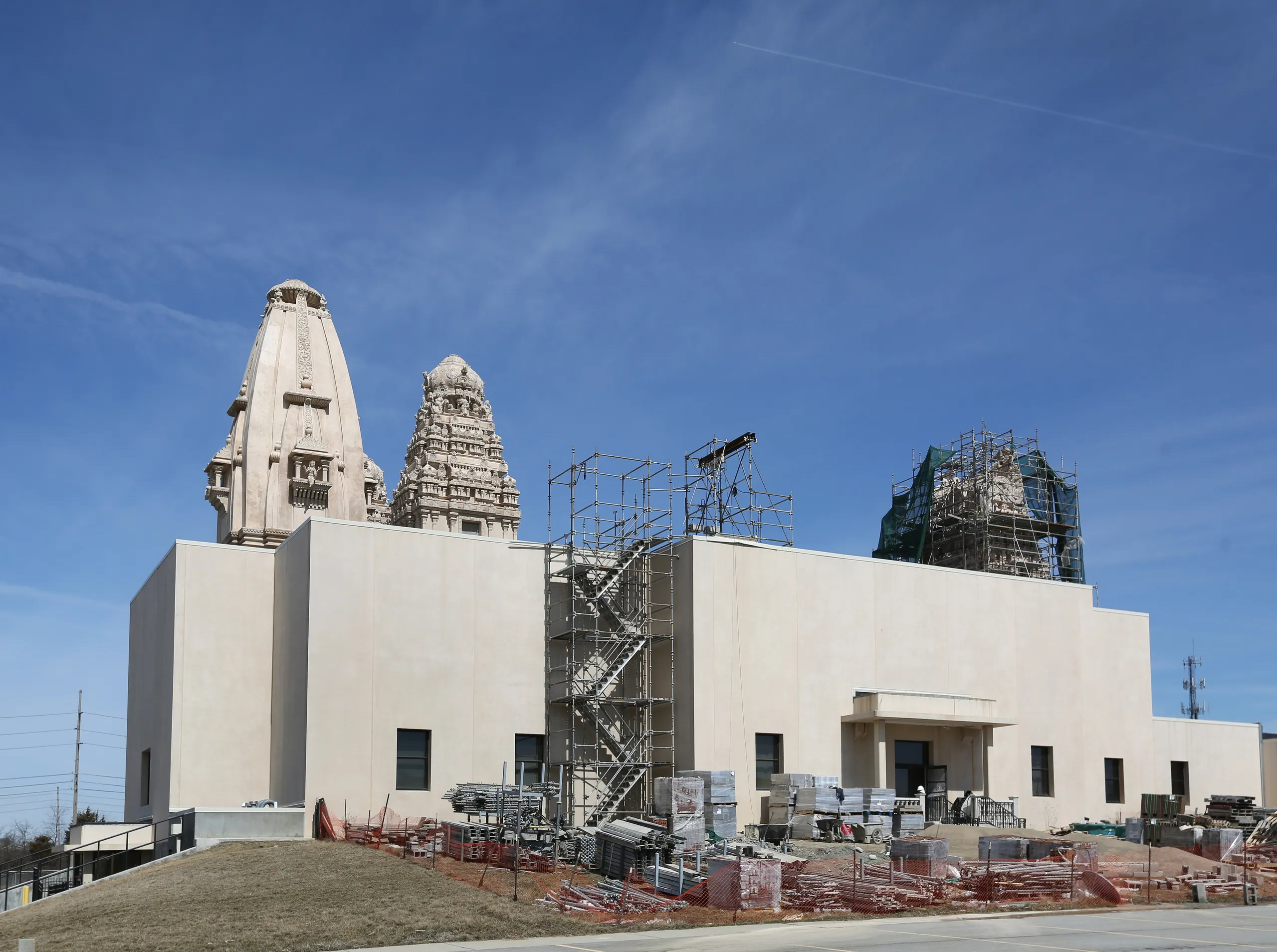 Armed with a $15 million budget for phase two, the board envisioned a larger “box” attached to the back of the phase-one core “box” structure. A year before the completion of phase two the HTCI organized a religious ceremony for the introduction of two new idols to grace the temple: Sri Subramanya and Sri Ayyappa. Inauguration of phase two was met with a tepid reception. Even with the idols gracing the temple interior, worshipers complained that the sacred structure looked like a warehouse rather than a temple.

Acknowledging the worshipers’ input, the board embarked on phase three. The goal to transform the industrial-looking “box” into an ornate, recognizable temple required great artistry. The “Indianization” of the structure began. 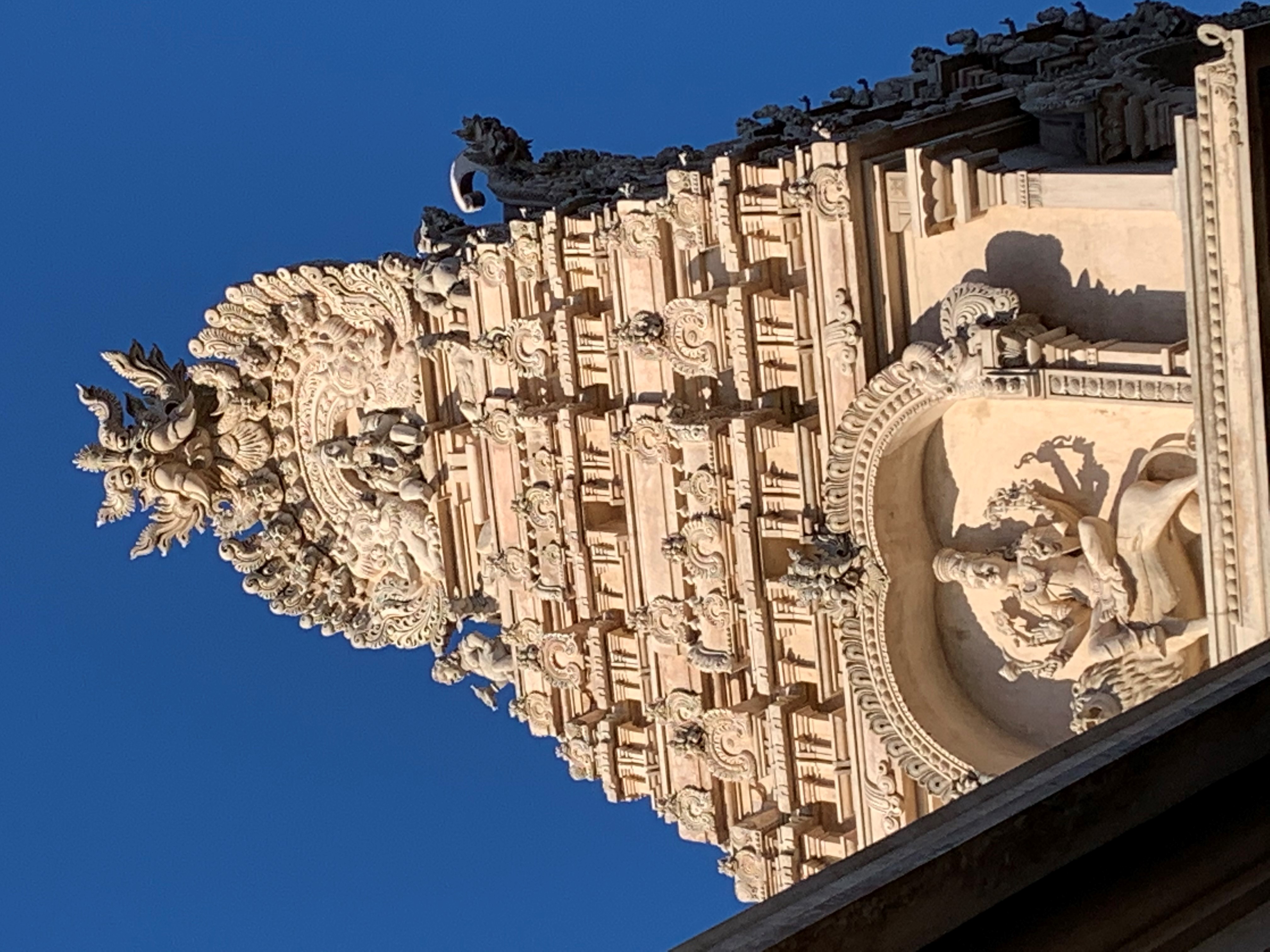 The success of phase three rests in the fulfillment of the plan established in 2006. Various structural designs representing the architecture present in the different regions of India where Hinduism was most prevalent was a must.

Four towers designed to signify one of the major sectarian groups of Hinduism—Vaishnavas, Shaiva, Shaktas, and Smartas—insured that each had equal recognition.

With a $10 million budget, the board of directors hired Umanandan Nagarajan, a 10th-generation stapadi, or temple architect, from India. Nagarajan understood the ancient science of Indian architecture called Sthapatya Vidy. His job in Indianapolis has involved turning 17 cement block walls into unique intricately designed carvings to house the 17 Hindu deities that would be imported from India.

Nagarajan set out to transform these blocks to Sannidhis or shrines and to position them accurately. Under a massive skylight, the 17 shrines were spread over the four different gopurams, carved towers, to provide separate prayer spaces. Phase 3 featured constructing three main shrines under separate 99-foot tall concrete and mortar towers. A fourth main tower soared 99 feet above the main entrance of the temple. 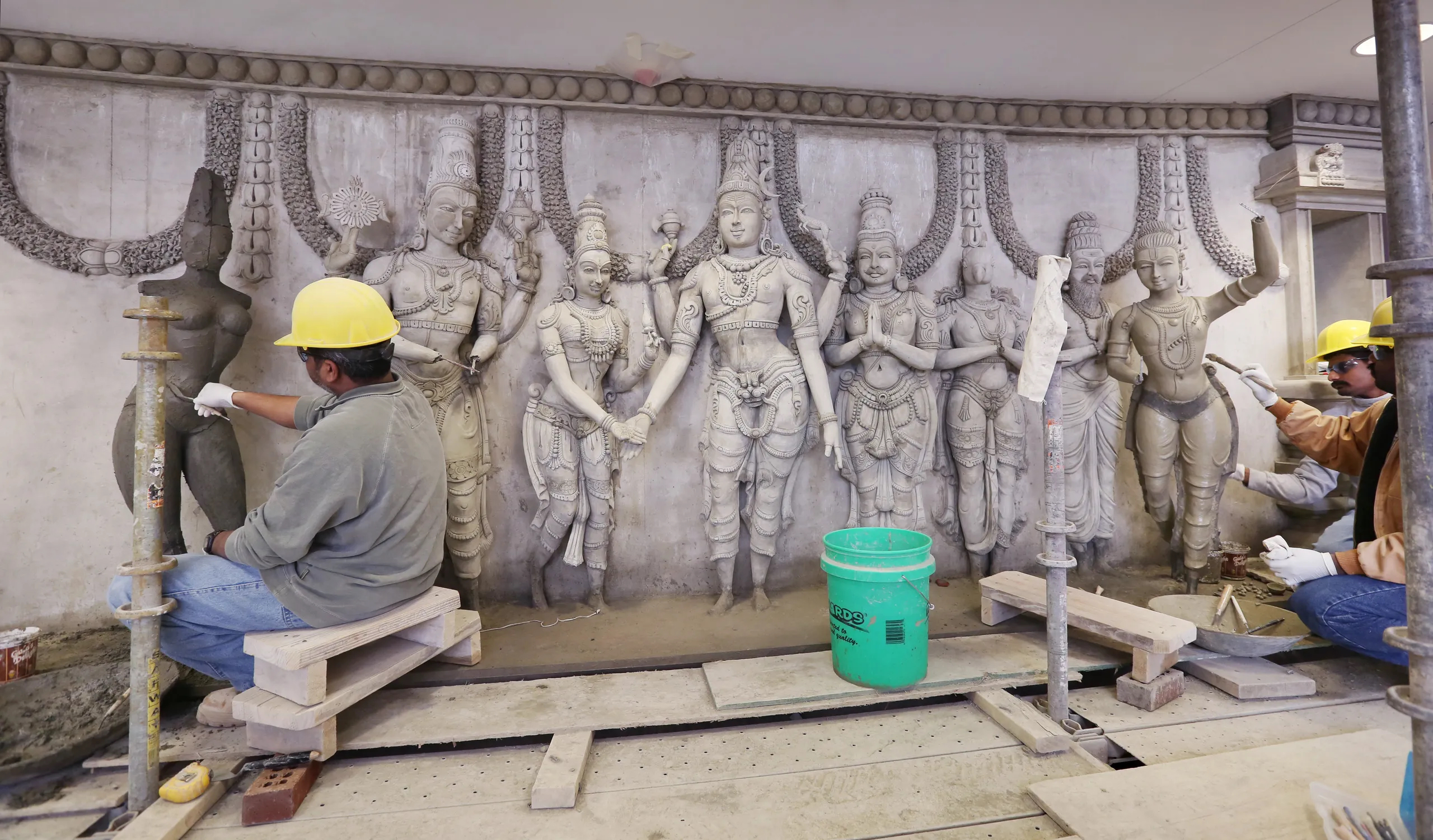 Thirty shilpis, temple artisans, traveled to Indiana with Nagarajan. These men remained in Indiana for two years to accomplish the temple’s artistic transformation. Sathya Thulasiraman the project manager ensured that the architect and his artisans complied with strict OSHA standards. Though not the norm in India, everyone learned to wear safety glasses, hard hats, and protective footwear. Scaffolding met safety standards and a special mix of mortar, not typically used in the temples in India, was used to withstand the cold Indiana weather.

With phase three nearing completion plans for the Maha Kumbhabhishekam or consecration ceremony began. Twenty Hindu priests from across the nation descended upon Indiana to perform the five-day ceremony from June 3-8, 2015.

Since its opening, the HTCI has thrived. The temple serves as a place to worship and a place where younger generations of Hindus come to learn how their faith should not divide them from the community but should integrate them into the larger Indian and even larger American community.

Numerous classes are taught in the temple. Hindi language and Sanskrit script courses are offered along with traditional yoga classes. Strota, a literary genre of Indian religious texts meant to be sung in contrast to reading is offered. Balagokulam is a program that helps children discover a positive Hindu-American identity and to appreciate their cultural roots and learn Hindu values.

Ceremonial worship services called Puja, brief daily rites, are a mainstay of the temple. The temple has instructional resources from an online library full of literature to Geeta sessions. Here Hindus learn from the Bhagavad Gita is part of the colossal Hindu epic Mahabharata.

The HTCI stands as a monument of exquisite architecture symbolizing Sanatana Dharma (Hinduisms) in Central Indiana. With more than 10,000 Hindu families in Central Indiana, the HTCI serves the spiritual needs of these families and represents the diversity of Hindu faiths and culture.

In 2020, Central Indiana also is home to the BAPS Swaminaryan Hindu temples in Avon, built in 2004. Other Indiana Hindu temples are in Lafayette and Merrillville.