Herron-Morton Place is a historic district bounded by 22nd Street on the north, Central Avenue on the east, 16th Street on the south, and Pennsylvania Street on the west. Before it was developed, a small stream—a tributary of Fall Creek—meandered through the western portion of the area making it marshy, while the northeast section was wooded.

An early settler, Thomas O’Neal first owned the 25 acres that would become Herron-Morton Place through a land patent granted to him in 1822. This acreage represented only a portion of the 160-acre plat that O’Neal received. In 1835, he sold the land to Samuel Henderson, the first mayor of Indianapolis. The city made improvements in 1839 to prevent flooding, but the land remained relatively unchanged through the 1840s and 1850s. A wooded tract in the middle of the area (bounded approximately by present-day Central Avenue and 19th and 22nd streets) became known as “Henderson’s Grove” and was a popular picnic spot through the 1850s. Henderson sold 80 acres west of what is now Delaware Street to Elizabeth Tinker and the acreage to the east to William A. Otis in 1850.

In 1859, the Indiana State Board of Agriculture bought the land that Otis had purchased from Henderson as a home for the Indiana State Fair. Several buildings were constructed in the area designated for the fairgrounds between 19th Street, Talbot Street, 22nd Street, and Central Avenue. These structures included an exhibition hall, office, and livestock barns. During the Civil War, Governor Oliver P. Morton requisitioned the area to induct and train soldiers. Later, Camp Morton housed captured Confederate troops. Following the conflict, the land was returned to the State Board of Agriculture. Some parts of Herron-Morton Place were developed as residential lots as early as 1870. However, the state fairgrounds took up much of the area until a new site was selected on Maple Road (38th Street) in 1890. Willard W. Hubbard, Edward F. Claypool, and Elijah B. Martindale bought the old fairgrounds, renamed it Morton Place, and sold upscale residential lots. The neighborhood was platted in a simple grid pattern, similar to and extending from the original Alexander Ralston Mile Square plan. Streets in the neighborhood, however, do not necessarily line up with those outside the district.

Affluent families built imposing homes in Queen Anne style, although there are also a few examples of Italianate, Tudor Revival, and American Four-Square styles. Many of the homes displayed extensive detailing and fine craftsmanship. Most were constructed between 1870 and 1891. Several cottages also intermixed with the more opulent homes, and some commercial development occurred at intersections of major thoroughfares. Renowned hoosier group painter T. C. Steele rented the Elizabeth Tinker Talbot House, located at 1600 N. Pennsylvania Street, when he and his family returned from Munich, Germany, in 1885. Tinker House (also known as Talbott Place) served as Steele’s studio for the next decade.

After Indianapolis businessman John Herron gave a bequest to the Art Association Of Indianapolis in 1895 to establish an art museum and school, Tinker House became the first home of the Herron Art Institute, which opened in January 1902. The house was razed in 1905, and local architects Vonnegut And Bohn designed the three-story neoclassical building that replaced it in 1906. In addition to Steele, several other hoosier group artists taught at the school during its early years, including J. Ottis Adams, William Forsyth, and Otto Stark. Rudolf Schwarz, commissioned to carve statues for the Soldiers And Sailors Monument, headed the sculpture department. Philadelphia architect Paul Philippe Cret designed an additional two-story Beaux-Arts brick structure for the Herron campus, which opened in 1929.

The Booth Tarkington civic theatre was another important cultural resource for the neighborhood. Established in 1914 as the Little Theatre Society of Indiana, Civic premiered its first production in the Herron sculpture court in October 1915. In 1925, it began its run in its own 240-seat playhouse at Alabama and 19th streets. The first female African American to own a barbershop, Carol and Everybody's Barber Shop set up business in this building, shown in 2020.
Credit: Matt Nowlin
View Source

Between 1900 and 1930, Herron-Morton Place was home to some of the city’s leading citizens in politics, business, and the arts. Senators Albert J. Beveridge and John W. Kern lived there, as did Governor Samuel Ralston, retailers Frederic Ayres and William H. Block, and Dr. William N. Wishard. A number of apartment buildings were also built in the area as early as 1907.

From 1930 to 1970, Herron-Morton Place deteriorated as new suburbs to the north drew residents, and original owners died. Many of the homes were subdivided into apartments. Decay, neglect, and demolition claimed a considerable number of homes. During the 1960s, this residence was home to a Herron School of Art-owned painting and photography studio.
Credit: Matt Nowlin
View Source

During this era, in 1956, a group of Herron Students initiated the Talbott Street Art Fair. Held between 16th and 20th streets on Talbott Street and featuring over 200 exhibiting artists, the show has become a signature annual event for the neighborhood.

Renamed the Herron School Of Art And Design, the long-independent school of the Art Association of Indianapolis became part of Indiana University in 1967. The museum separated from the school and left the Herron campus for its location at the former J. K. Lilly Jr. estate at 38th Street and Michigan Road and was renamed the Indianapolis Museum of art (IMA) in 1970. 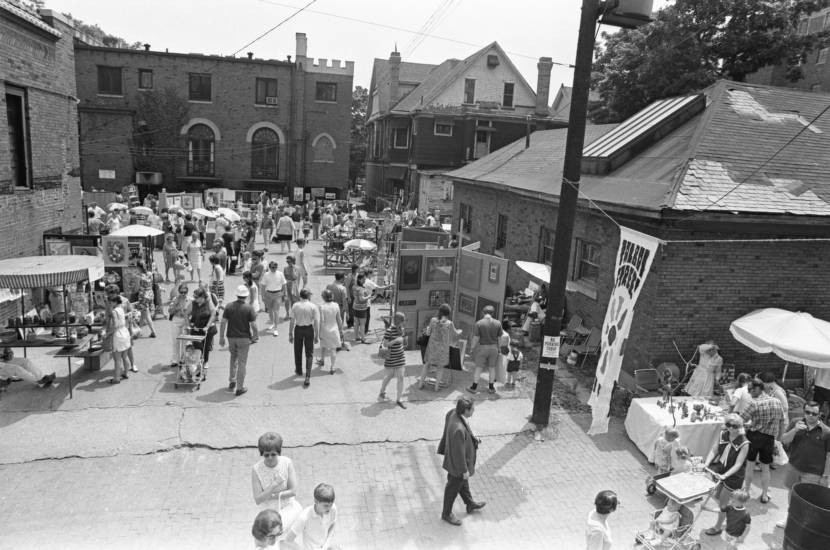 Civic Theatre also left Herron-Morton Place, moving to the Showalter Pavilion at the new IMA in 1973. Footlite Musicals, an all-volunteer theatre group, leased the former home of Civic in 1974, and then Indianapolis businessman Phil Hedback purchased the theater, which was renamed for him. He donated the property to Footlite to continue the legacy of live theater in the neighborhood.

In the 1970s, new residents began to purchase and restore remaining structures. Herron-Morton Place Association incorporated in 1978 to “bring about civic betterments and social improvements to the neighborhood.” The association then moved to preserve the neighborhood and to restore it as a historic area. Herron-Morton Place was listed on the National Register of Historic Places in 1983. The Indianapolis Historic Preservation Commission designated the neighborhood as a historic district in 1986. These designations aided in the preservation and restoration of most of the remaining structures.

Herron-Morton Place also became an important hub of LGBTQ life and culture. In the 1960s, the neighborhood was home to the Club Betty K, which operated out of a large Victorian house at 1808 Central Avenue. The 21 Club, at 21st and Talbot streets, has been identified as an important 1980s gay bar. Other clubs that have operated out of the same venue have included Johnnie’s Place and Harlow’s. Talbot Street, which took over a former movie house at 2145 Talbot Street in 2002, became an iconic nightclub for the LGBTQ community. The club was known for drag shows and other alternative entertainment events and became popular as one of the best dance clubs in Indianapolis. It closed in 2016.

The Herron School of Art and Design moved to Eskenazi Hall on the IUPUI campus in 2005. In the historically significant buildings that the art school abandoned at 16th and Pennsylvania streets, Herron High School opened with a classical, liberal arts curriculum in 2006. Executive director of the nearby Harrison Center, Joanna Beatty Taft originated the idea and brought together civic leaders to create much-needed, high-quality public education at the high school level in the city’s urban neighborhoods. Herron High School has become the best-performing high school in the city. Herron provided the model for opening another classical high school— Riverside. It opened in the former Heslar Naval Armory in 2018.

The Herron-Morton Place Association continues to revitalize the area and provide support for restoration efforts.