The growth and diffusion of the population in Marion County after World War II created demands that went unmet by existing public health bodies. In 1948, the Health and Welfare Council, a consortium of public and private health agencies, began to investigate Marion County’s health needs. Its recommendations resulted in the creation of the HHC by the Indiana General Assembly in 1951, a consolidation of the Indianapolis Health and Hospital Board, the Marion County Health Board, and the board of managers of Sunnyside, the county poorhouse.

HHC was given jurisdiction to provide public health protection and services throughout Marion County as well as the power to raise bonds and levy property taxes. Due to a suit challenging the HHC’s constitutionality, it did not exist legally until 1954. At that time, the Indiana Supreme Court declared HHC a constitutional body by removing Sunnyside from its control. The status of the corporation was again threatened with the implementation of Unigov in the early 1970s, but a powerful political bloc successfully fought to retain the corporation’s independent status.

Health and Hospital Corporation was originally governed by a board of five members who served four-year terms. As of the early 1990s, the board consists of seven members, three being appointed by the mayor, two by the county commissioners, and two by the City-County Council. Municipal bonds pay for capital improvements, while property taxes provide funds to pay for indigent patients who do not qualify for financial assistance from other governmental agencies. Other sources of income include patient revenues, Division of Public Health licenses, and federal grants.

What used to be known as the HHC Division of Public Hospitals traces its history to the establishment of City Hospital in the 1850s. In 1947, City Hospital was renamed Indianapolis General Hospital, and in 1959, it became known as Marion County General.

In 1975, the Indiana University School of Medicine (IUSM) signed an agreement with HHC that gave the school control over management of all professional services, including patient care, teaching, and research activities. With this agreement, the hospital was renamed Wishard Hospital. The Midtown Community Mental Health Center, a statewide service, was also housed at Wishard. In addition, Wishard was home to the Regenstrief Institute, which provided outpatient care. As of 1990, Wishard assumed operation of five community health centers that the county health department previously administered.

In 1995, HHC opened its first skilled nursing facility, Lockefield Village, on the Wishard campus. HHC provided long-term care at Lockefield Village until it closed in 2009 with the construction of Eskenazi Hospital. In 2003, HHC began acquiring nursing homes that required “capital improvements and sound management practices,” to improve the quality of care. By 2011, HHC owned 44 nursing homes, which generated $131 million. HHC president Matt Guttwein stated that HHC’s priority was improving the quality of care at those facilities, but he also acknowledged that nursing homes “helped Health & Hospital Corp. boost its overall finances” and that they “helped it expand services at Wishard.” Payment policies of federal-state Medicaid program allowed HHC to pay the state Medicaid agency extra fees that triggered higher federal matching funds. HHC hired a private corporation, American Senior Services, to operate them. 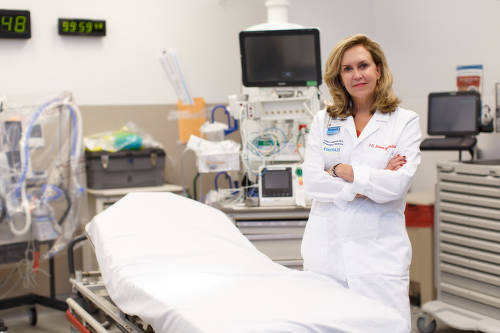 In 2010, HHC in partnership with the City of Indianapolis and IUSM established Indianapolis Emergency Medical Services (EMS). This partnership unified Wishard and the Indianapolis Fire Department EMS services. Wishard took responsibility as the supervising partner. Indianapolis EMS runs ambulances throughout Marion County. It operated as a division of the Department Of Public Safety until it was dissolved in 2016. HHC now administers EMS.

In 2009, the city carried out a referendum that resulted in construction of a new hospital facility. Sidney and Lois Eskenazi gave $40 million to the project. The Indiana Health Institute, which HHC founded to support Wishard in 1985 and renamed Eskenazi Health Foundation, launched the Eskenazi Health Campaign to raise funds for the new hospital. In December 2013, the sidney and lois Eskenazi Hospital and Eskenazi Health opened, replacing Wishard Hospital. Eskenazi Health gives residents access to a level I trauma center, a regional burn center, and a comprehensive senior care program. It also provides women and children’s and adolescent care services. Total construction costs totaled $754 million.

While Eskenazi was being built, HHC continued to acquire nursing homes. By 2020, HHC owned 78 long-term care facilities across the state, making it the holder of the largest number of Indiana nursing homes. Fourteen are located in Marion County.

Early in 2020, an Indianapolis Star investigation revealed that Indiana received more supplemental Medicaid nursing home funding than any other state but that those monies had not been used appropriately. The Star investigation stated that a 2016 report compiled by American Senior Communities (ASC) claimed 25 people had defrauded HHC nursing homes of at least $35 million, although only five individuals were prosecuted and $15.5 million recovered. The report alleged the agency had used loopholes to divert Medicaid funding meant for nursing homes to other projects, including the construction of Eskenazi Hospital. This diversion had occurred over the previous two decades and totaled over $1 billion.

The 2020 COVID-19 pandemic heightened attention to problems in HHC long-term care facilities. Between March and August, the first six months of the pandemic, HCC nursing homes accounted for about 23 percent of COVID-19 deaths in such facilities although it owned only 11 percent of them in the state. These numbers raised more questions about how shifting money from nursing homes to Eskenazi Hospital and other programs had affected their ability to provide adequate care. On August 24, 2020, Guttwein resigned in August 2020, replaced by Paul Babcock. Babcock had been public health and safety director in the Mayoral Administration Of Joe Hogsett.

In August 2022, ASC agreed to pay $5.5 million in a settlement over allegations that it submitted false claims to the federal Medicare program. Babock made it clear that HHC was not a party in the lawsuit and that the municipal corporation had taken steps to improve oversite “requiring American Senior Communities to adhere to a comprehensive compliance plan.”