During the 10 months preceding the stock market crash in October 1929, the Indiana Business Review concluded that there was a high level of industrial activity in Indianapolis and that most lines of business had improved over the previous year, except for the building trades.

By early 1930, the situation had changed dramatically. The U.S. Bureau of the Census reported that almost 17,000 of Marion County’s workforce of 182,000 (9.3 percent) were looking for work. By September, employment in the city was 17 percent under the 1929 level, compared to a statewide drop of 15 percent. “Help Wanted” advertisements for December in the capital’s three newspapers decreased 23 percent from pre-Depression levels.

Most factory employees were working on a part-time basis by May 1931. Without unemployment benefits or other features of the modern welfare system, the unemployed faced serious financial problems. Finding a job was particularly difficult for middle-aged men, as men over 45 were considered past their prime.

In February 1930, local business leaders formed a commission “to study and act for the stabilization of employment in Indianapolis.” For the remainder of the winter, the commission worked to persuade employers to reduce layoffs and to increase their support of relief efforts. That summer, the group planned for the winter of 1930-1931 by organizing a relief program that would require recipients to work for their benefits. Winters were especially bad because seasonal unemployment peaked then.

The nonprofit Emergency Work Committee operated the make-work program, beginning its efforts in early fall 1930 and incorporating in December. A benefit football game between Shortridge and Cathedral high schools provided the initial $10,500 the committee used to pay wages to unemployed people recommended by the Family Welfare Society, the Catholic Community Center, the Jewish Welfare Federation, and the public schools’ social service department. Workers received 30 cents an hour for three eight-hour days of work.

When funds ran out in early January 1931, the Indianapolis Community Fund gave $42,500 for relief. The Indianapolis chapter of the American Red Cross provided funds earmarked for World War I veterans and many Marion County employees donated 1 percent of their salaries to the committee. The program was expanded so that those receiving relief from township trustees could participate. The committee decreased its level of support during the summer months, citing reduced need. By August 1931, recipients were almost evenly divided between African Americans and whites.

The Emergency Work Committee held various fundraising activities such as firewood sales, baseball games, and vaudeville performances to continue funding relief efforts. As economic conditions worsened, the committee was able to provide less relief, decreasing from three days’ work for cash to three days’ work for cash and food to two days’ work for food. During the final phase, the committee gave recipients a card with their work assignment, usually in a city government department. In exchange for 16 hours of work, workers’ cards were approved and returned to the township trustee where they could be redeemed for a basket of groceries valued between $2.00 and $5.00 ($35 to $85 in 2020) depending on family size.

After its first year of operation, the Emergency Work Committee drew up guidelines to determine who should receive aid and in what order. Relief cases were graded good, fair, or poor on the basis of the applicant’s need, physical condition, moral character, and ability to be self-supporting if given a small wage. Those graded as good in all categories received assistance first, whereas previously recipients had been selected randomly.

Based on committee minutes from January 1932, most aid recipients resided in Center Township, particularly downtown and on the near westside between the Central Canal and White River. They painted and cleaned, repaired streets and sidewalks, removed trash, mowed grass, and performed clerical work. By March 1932, the Emergency Work Committee had provided relief compensation for almost 2.3 million hours of work.

Beginning in July 1931, the Indiana Business Review reported new record lows in Indianapolis employment and business activity for 22 straight months. In November 1931, employment in the city was more than 25 percent under 1929 levels. By April 1932, it had dropped off 30 percent. The manufacturing workforce was hit especially hard, declining by half (59, 000 to 30,000) from 1930 to 1933. Other midwestern cities had even higher total unemployment rates, with 50 percent out of work in Cleveland and 90 percent without jobs in Gary. Indianapolis avoided such extremes because of its diversified economic base. Its unemployment rate, however, continued to climb until April 1933, when it reached 37 percent.

For Indianapolis, the years 1932 and 1933 were the most severe. The construction industry was down dramatically with the building index in May 1933, almost 90 percent under pre-Depression norms. The number of Indianapolis building permits issued in the period from 1931 to 1934 was one-quarter the number issued from 1927 to 1930. Only 27 homes were built in the city in 1933. The real estate business also suffered, with the number of deeds and mortgages recorded bottoming out in 1932 and 1933. The city’s cost of living index reflected the hard times, declining almost 9 percent in 1932 alone. In the first six months of 1933, the index dropped another 2.7 percent to a level 25 percent lower than the pre-Depression years. 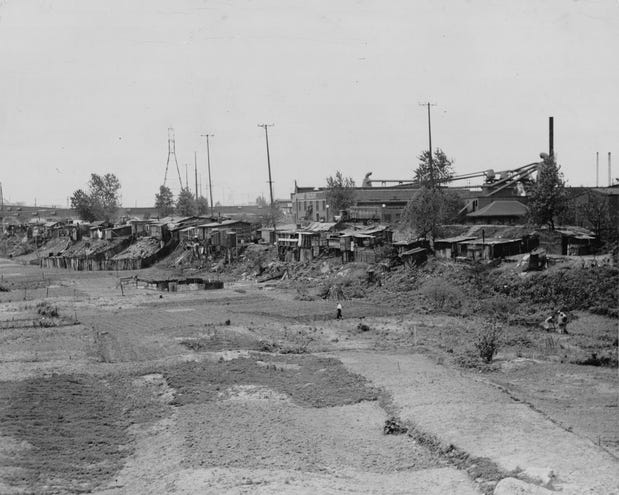 Both private and public sectors of the economy suffered during the early to mid-1930s. The Stutz Motor Car Company closed in 1934, and the Columbia Conserve Company forced employees to take substantial pay cuts. but Eli Lilly And Company and Merchants National Bank, however, managed to retain all their employees during the hard times. The Marion County sheriff was forced to cut 17 deputies from his staff in January 1932. Charities such as the Sunshine Mission (744 Virginia Avenue) fed 300 people each day and distributed 6,000 garments, yet still failed to meet demand. In 1933 Second Presbyterian Church’s Mayer Chapel on the southside provided food, clothing, and coal to over 200 church families.

In early 1933, the Indiana General Assembly created the Governor’s Commission on Unemployment Relief (GCUR). In November of that year, the Women’s Work Division of the GCUR was organized under the federal Civil Works Administration. This division recognized that “in many family groups the potential wage earner was a woman… [and] large numbers of unattached women were in need.” 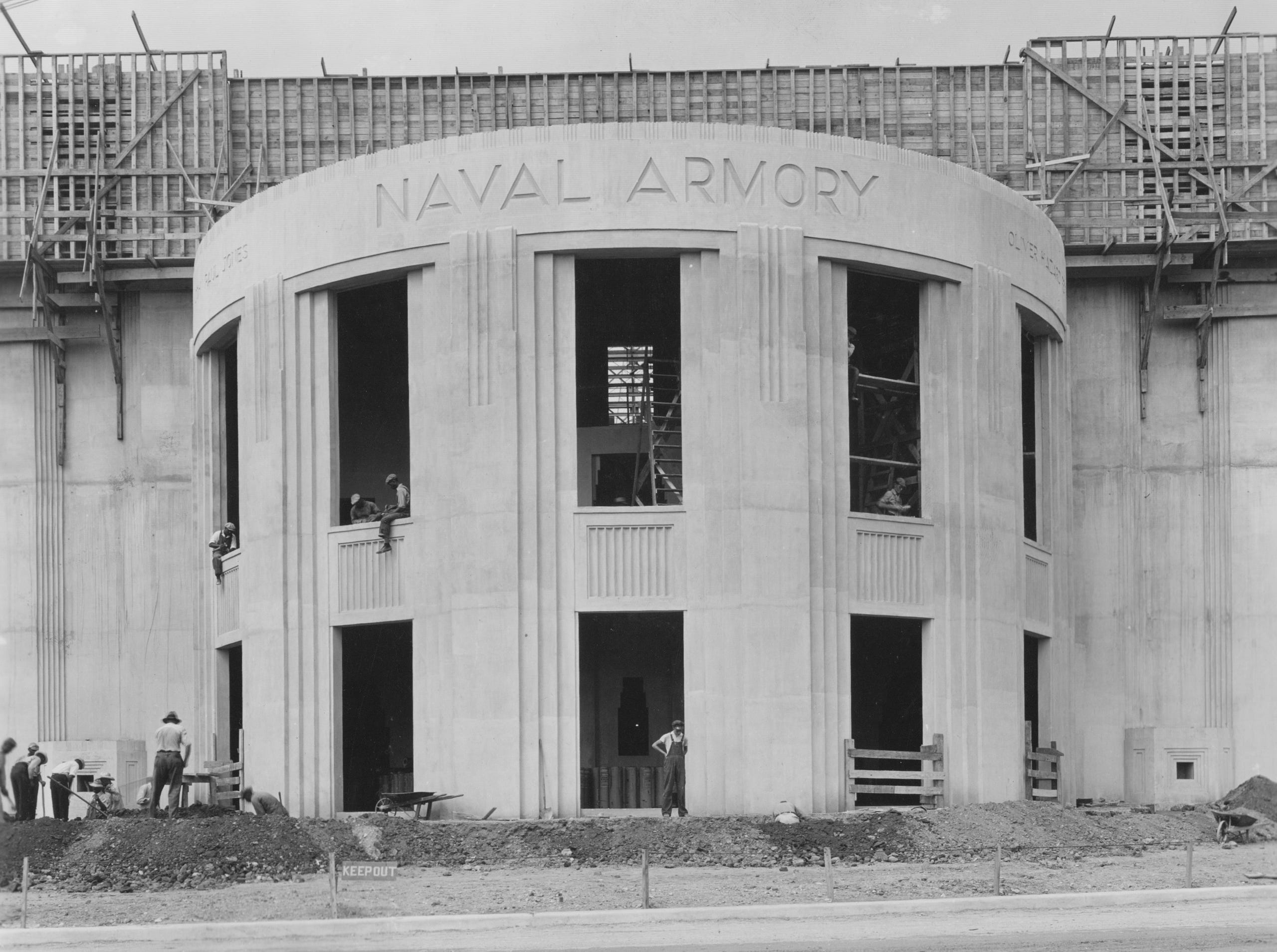 In Marion County women engaged in clerical work, cataloged and indexed books in libraries, cleaned public buildings, participated in large sewing projects, and served as public health nurses. Previously, women had been certified for work relief only if there were no employable men in their families. Women who found private employment during the Depression often were forced into accepting similar lower-paying, pink-collar jobs. Black women had even fewer opportunities. Many who received relief jobs worked as domestic or personal servants.

By fall 1933, New Deal programs were having an impact on the Indianapolis economy. Employment picked up, in part because of regulations by the National Recovery Administration. In November, a decline in private employment was more than offset by employment on Civil Works Administration projects. The Women’s Prison, the Heslar Naval Armory, Fall Creek Parkway, Howe High School, and Lockefield Gardens were local examples of public works projects.

Indiana’s 28 Civilian Conservation Corps camps were coordinated from Fort Benjamin Harrison. Fort Harrison also hosted the Citizens’ Military Training Camp during the 1930s to train young men for the Officers’ Reserve Corps. These camps were very popular, in part because the month-long training session included free food, clothing, laundry, and transportation for participants. Enrollment for the 1933 camp was filled in a day.

In May 1934, the GCUR conducted a survey of relief recipients. Men comprised nearly 77 percent of recipients and women about 23 percent. Most recipients were white (65 percent); African Americans accounted for almost 34 percent of those receiving aid.

Aid recipients were most common in the 51-plus age bracket (34 percent), as opposed to those in the 41-50 (23 percent), 31-40 (24 percent), or 21-30 (15 percent) age categories. Sixty-four percent were married. Over half of public assistance recipients had no better than an eighth-grade education. Households receiving the most public assistance were those consisting of two people (24 percent) and those with six or more individuals (20 percent). The average worker on relief labored 22 hours a week for 30.8 cents an hour for a total of $6.78 per week (equal to $130 per week in 2020).

The Indianapolis economy showed marked improvement by July 1934, even though total industrial employment was 20 percent under the 1929 peak. In March 1935, new car sales picked up considerably as dealers sold more vehicles than at any time since August 1929. In spring 1935, the Indiana Business Review began publishing statistics on public relief by county. Although figures did not include those who never applied, transients, or persons receiving help under programs such as college student aid, emergency education, or rural rehabilitation, the reports are useful in approximating the extent of public relief in Indianapolis. In March 1935, almost 19 percent of Marion County’s residents received public relief. This number declined steadily over the next year to six percent reported in March 1936.

Although one author declared Indianapolis “among the best prepared” ...Read More »