There have been six official residences for Indiana’s governors. The first residence was located in Indiana’s original capital, Corydon, and was occupied by Governor Jonathan Jennings from 1816 to 1822. When the capital moved to Indianapolis in 1825, so too did the Governor’s residence.

In 1827, the General Assembly appropriated funds for a governor’s residence on the Circle where the Soldiers and Sailors Monument now stands. Designed by Alexander Ralston, the house was a large two-story yellow brick building with a low-hipped roof and a square platform on top. 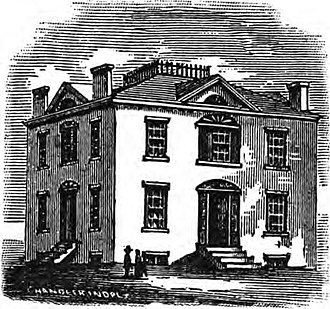 After the residence was built, Esther Ray, the wife of then-Governor James Brown Ray, refused to live in it due to its lack of privacy. No governor took residence, though at different times various state officials and private individuals occupied the rooms, including the state bank, the state library, the state engineer, Supreme Court judges, the Supreme Court clerk, and debating societies. Instead, governors and their families received a housing allowance to select their own place of residence.

By 1857, the building had fallen into decay. The city council sold the structure, and the new owner razed it for building materials in the 1870s.

In 1837, the legislature purchased Dr. John Sanders’ home for the governor’s mansion. Eight governors occupied the two-story brick house that had been built in 1836. Christian Schrader‘s drawing from memory depicted a five-ranked Colonial-style house. In vogue between 1780 and about 1840, five-ranked Colonial-style homes feature five symmetrically balanced windows on the top floor balanced with a center door and windows on the ground floor.

The home was not popular among its inhabitants, often being cited as damp and unhealthy. The state sold the home in 1865 after Governor Oliver P. Morton refused to live in it.

The city purchased the Henry Kahn home in 1916 and leased it to the state for the governor’s residence. Herbert Foltz had designed the English Tudor country home in 1908, which featured multiple front gables and a steeply pitched roof. The property once extended to Fall Creek but became an island surrounded by traffic as Fall Creek Parkway developed. Dust from the street and the lack of privacy caused state officials to move the governor’s residence to a new site. The home, which the Marott Hotel purchased in the 1930s, was demolished in 1962 for parking space.

In 1945, the state bought the Trimble family’s home. Frank B. Hunter designed the Colonial-revival home, which was built in 1924 for William N. Thompson, president of the Stutz Motor Car Company. The 2 1/2-story buff-colored brick home served as the governor’s residence until, like its predecessors, it proved inadequate for family living and official entertaining. The house was sold at public auction in 1973.

In 1974, the state bought a 1928 Tudor revival home for the governor’s residence. Designed by Rubush And Hunter, the 2 1/2-story red brick house was originally built for Scott Wadley and sits on 6 1/2 acres. After its purchase, the house underwent many renovations including the installation of air conditioning, a parking lot, and a new vestibule entrance.

Over the last 40 years, many governors and their families made their own contributions to the home. First Lady Josie Orr had a birdcage gazebo installed in 1981, Governor Evan Bayh installed a basketball goal in 1989, and First Lady Judy O’Bannon worked to make the estate more accessible to the disabled in 1999. In 2003, the state spent $1 million to make the residence more accessible for people with disabilities. Governor Mitch Daniels and First Lady Cheri Daniels began a large renovation project in 2006 that focused on plumbing, roofing, and the general aesthetics of the house. Wrought iron gates, a security building, and security cameras were added to the property in 2014.

At the beginning of Governor Eric Holcomb’s administration in 2017, a new heating, cooling, ventilation, and air-conditioning system was installed. At that time, repairs also were made to hardwood floors and thresholds, painting and electrical work were completed, and new windows were installed. In 2018, Holcomb unveiled a new basketball court on the residence’s grounds, intending it to be used for community events and youth leagues.