(Feb. 16, 1922 – Nov. 3, 2018). Born in Indianapolis to Armenian immigrants fleeing the Turkish Genocide, Antreasian introduced himself to lithography using abandoned equipment at Arsenal Technical High School in 1939. He continued his self-study of the medium at the Herron Art Institute, interrupted by three years as a combat artist in the Pacific during World War II.

At his graduation in 1948, Antreasian was awarded the Mary Milliken Travelling Scholarship, which he used to investigate Stanley William Hayter’s pivotal New York printmaking workshop, Atelier 17. Simultaneously he was appointed to the Herron faculty and added printmaking to the curriculum. With his success as a printmaker, teacher, and advocate for fine art lithography, he was given a year’s leave of absence in 1960 to serve as the first technical director of the Tamarind Lithography Workshop in Los Angeles, intent on training America’s first generation of master fine art printers.

Antreasian was hired away from Herron in 1964 by Clinton Adams, his colleague at Tamarind, to join the faculty of the University of New Mexico in Albuquerque. Antreasian and Adams lured the renamed Tamarind Institute to the university in 1970 and, the next year, the two collaborated on the seminal manual for contemporary lithographers, The Tamarind Book of Lithography. Many major art museums hold Antreasian’s work in their permanent collections, including the Metropolitan Museum of Art, the Boston Museum of Art, the Smithsonian American Art Museum, the Brooklyn Museum, the Art Institute of Chicago, the Guggenheim Museum, the Library of Congress, and the Los Angeles County Museum. 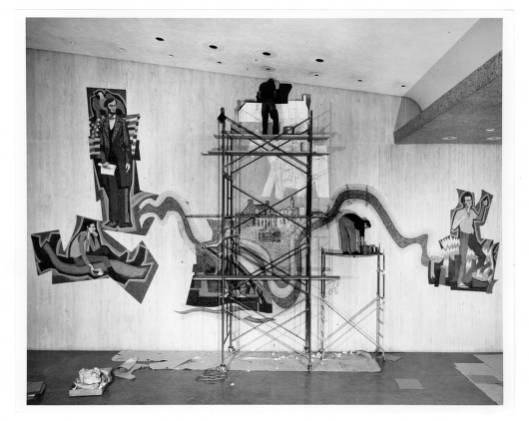 In 1994, Antreasian gave the Indianapolis Museum Of Art a 650-piece archive of his works. At the Indiana Government Center North, Antreasian’s mural depicting Abraham Lincoln’s childhood, which is made of 750,000 pieces of stone, is located near the escalator. Antreasian’s work also can be seen in the mosaic floor of the Holcomb Observatory at Butler University.

Antreasian made an emotional return to the land of his forebears in Turkey in 1982, where the grace of Arabic calligraphy and Islamic architecture made an unanticipated impact on his independent prints, drawings, and paintings. He retired from the University of New Mexico in 1986 and, with less access to the necessities of printing, turned his creative impulses almost exclusively to painting and drawing. Antreasian was named a Distinguished Alumnus of the Herron Art School and Honorary Doctor of Fine Arts, Indiana University, in 1972.