In 1874, the Jeffersonville Railroad sold a 98-acre tract along its right of way to a group of entrepreneurs who built Southern Riding Park, a harness racing track. The venture was short-lived, and the park was sold to Sheriff N. R. Rucker. Rucker then sold the park to the City of Indianapolis for $109,500 ($2.5 million in 2020), and it was renamed Southern Park. After the assassination of President James A. Garfield in 1881, the park was renamed again in his honor. Two additional land purchases were made in the early 1900s, bringing the total area of Garfield Park to 128 acres.

Located 2.7 miles southeast of Monument Circle, Garfield Park’s main entrance is at 2450 Shelby Street. An important feature of Garfield Park is the Pagoda, an imposing oriental-style concrete, rock, and wrought iron open structure with a curved copper roof. Built in 1903 at the height of opera popularity, it has been used for musical performances throughout the years and presently is a popular picnic site.

Unique to Garfield Park is its 10,000-square-foot conservatory is constructed of welded aluminum and glass, the first of its kind in the United States. The temperature-controlled building includes a 15-foot granite waterfall set against a background of orchids and other tropical plants. Danish American landscape architect Jens Jensen designed the structure in collaboration with Schmidt, Garden, and Martin of New York. Indianapolis-based Hitchings and Company served as engineers on the project, which was built between 1906 and 1907. A rain forest and desert area provide a varied educational opportunity for visitors. The conservatory faces the Sunken Garden, a large landscaped formal garden designed by George E. Kessler. Both the conservatory and grounds are popular wedding sites.

On July 13, 1919, a race riot broke out at the entrance of Garfield Park when hundreds of white teenage boys attacked several Black teenage boys. The Black boys were run out of the park, beaten by bricks and clubs. They took shelter at the house of Nathan Weather, who fired a shot at the ground to disperse the white boys surrounding his house.

Beyond the entrance, a drive through the park over the limestone bridges, which span the flowing streams of Pleasant Run and Bean Creek, reveals a beautiful rolling landscape. Although 1992 storms destroyed 20 percent of the park’s trees, many stately oaks and sycamores are included in the still beautiful stand of trees.

Garfield Park provides its visitors generously equipped playground and picnic areas. The park also maintains tennis courts, an aquatic center with a large outdoor pool and water park, and a community center and arts center (remodeled in 2006). Every snowy year many enjoy sledding down a large slope at the northside of the park.

The Burrello Family Center opened in 1998 and houses extensive indoor athletic facilities as well as provides fitness classes and youth sports leagues. The park’s commitment to its community was evident in April 2020 when the park opened the Burrello Center to be used as an overflow shelter for the city’s homeless population during the COVID-19 pandemic. This allowed Indianapolis shelters to decrease exposure risk through increase spacing of beds for social distancing. 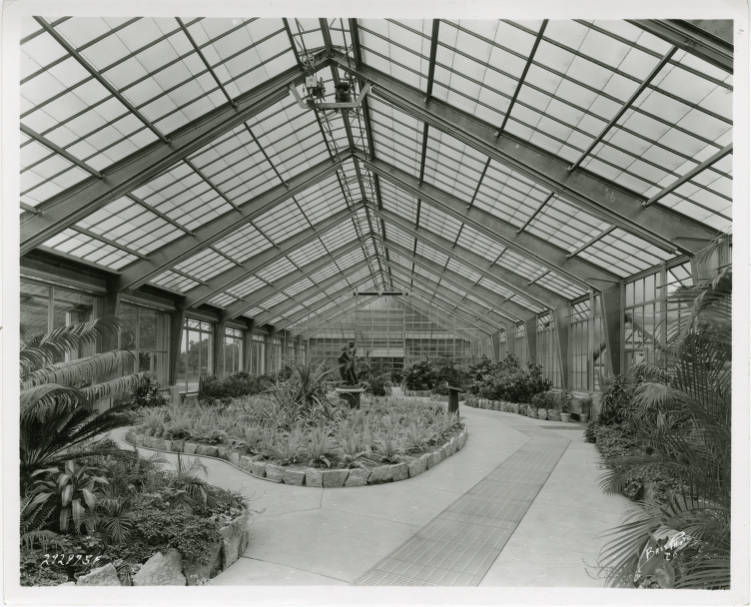 Two war memorials are located in Garfield Park: a bronze statue of Major General Henry W. Lawton, a Fort Wayne native and Civil War veteran who later was credited with the capture of the Apache chief Geronimo, and the Grove of Remembrance with a tree planted for each of the 387 Marion County men and women who lost their lives in World War I. A third statue, a granite shaft inscribed with the names of 1,616 Confederate soldiers who died while imprisoned at Camp Morton, was located in the park until June 8, 2020. A resolution was passed in 2017 to remove the statue, but it was not until the national movement for racial justice and equality in 2020 that it was finally dismantled and placed in city storage.

There are two government-run facilities housed within the park boundaries. The Garfield Park Branch (formerly known as the Shelby Branch) of the Indianapolis Public Library, which opened on November 8, 1965, and was renovated in 2011. Station 29 of the Indianapolis Fire Department was established in 1991 and is also located in the park boundaries.

Since 1998, many of the improvements in Garfield Park have been through the work of the Friends of Garfield Park, a nonprofit organization. The Friends of Garfield Park does the annual maintenance of the Sunken Garden and purchases additional plants to improve park ecology. Friends members also established Blake’s Garden for children and purchased equipment for the MacAllister Center and aquatic center. The group has provided financial support through the Garfield Park Fund for these efforts as well as to bring in additional programming with vintage movies, music, and theater programs.

In September of 2019, Garfield Park became more accessible through the services of the Red Line, a bus service that connected the southern and northern Marion County (See Indygo ).