Although Filipinos were considered U.S. nationals following the annexation of the Philippine Islands after the Spanish-Amerian War of 1898, the Philippines Independance Act of 1934 defined Filipinos as aliens for purposes of immigration. Subsequent U.S. immigration law imposed quotas on Asian migration during the first half of the 20th century, and the Great Depression and World War II also reduced immigration numbers. After the war, the downward trend in Filipino immigration began to reverse as migration channels between the Philippines and the United States reopened for family and work-related purposes. However, not until passage of the Immigration and Nationality Act of 1965, which abolished national-origin quotas, did Filipino immigration to the United States increase dramatically.

In Indiana, Lake and Marion Counties continually have had the highest number of Filipinos in the state. Filipino immigration to Indianapolis reached its peak between 1969 and 1974.

Most Indianapolis Filipinos come from the northern Philippine islands. They also tend to be college-educated, many having graduate training. A preponderance of Filipinos originally came to Indianapolis to train and/or work at the Indiana University School Of Medicine and Eli Lilly And Company. Moreover, large numbers of Indianapolis Filipinos (roughly 70 percent) work in health and medical fields, such as doctors, nurses, respiratory therapists, medical technologists, physical therapists, and certified nursing assistants. Many of the rest are involved in the food and hospitality industry.

A large proportion of the Indianapolis-area Filipino community are practicing Catholics, but they have not organized a specific church or congregation. Filipino holidays include Rizal Day, memorializing the Philippine Revolution against Spain, and Santa Cruzan and Flores Day, festivals celebrating harvest and spring.

The leading Filipino institution in Indianapolis is the Barangay Club, which was founded in 1960. The Barangay Club of Indiana, Inc., whose name means “mutual happiness,” began with a nucleus of a few students and immigrant professionals presenting programs and exhibiting arts and crafts of the Philippines. 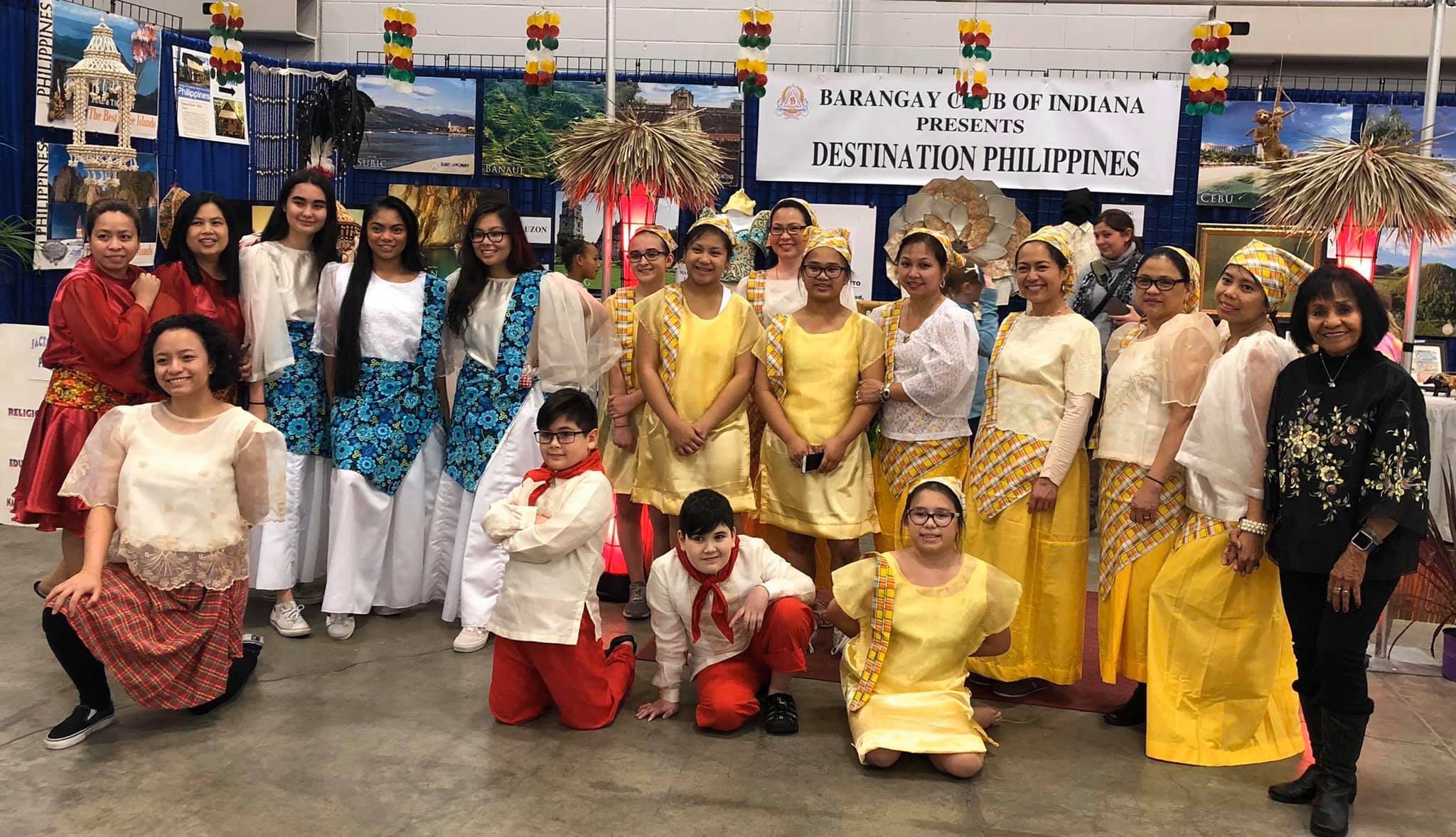 The Philippine Nurses Association of Indiana (PNA-IN) works to unify Filipino American nurses in Indiana through networking, education, community outreach, and social events. Established in 1999, its vision is to serve as the voice of all Filipino American nurses and promote unity, growth, service, visibility, and vitality. PNA-IN regularly promotes and provides health, health education, and healthcare services to the community.

Beside the Barangay Club and Dance Troupe, the Mabuhay! Philippine Cultural Community is another Indianapolis Filipino cultural and educational organization focused on creating a sense of belonging. Established around 2012, its mission is to share and engage the community in the Philippine culture through education, partnership, participation, and active involvement. Finally, SAYAW showcases dances from the various regions of the Philippines. Its members, who are volunteers of various backgrounds and levels of technical dance training, perform at festivals, fairs, weddings, and church events.

Filipino residents of Indianapolis historically tended to live among other Asian groups, with small clusters having formed near Fort Benjamin Harrison and in the northwest corner of Indianapolis. Although Filipinos were the largest Asian nationality to immigrate to the United States by the 1980s, in the early 21st century only 1,452 people living in Marion County claimed Filipino ancestry. By 2010, there were a little over 10,000 Filipinos living in Indiana, with the majority residing in the Indianapolis area, Avon, in Hendricks County, has the highest concentration of Filipinos, making up 0.8 percent of the population, followed by McCordsville, in Hancock County, with 0.6 percent. By 2020, there were about 2,656 Filipino residents in Indianapolis.

In summer 2021, the Philippines Cultural Community Center opened to support new Filipino immigrants to Indiana and to raise cultural awareness. The community center provides a place for members of the Filipino community to gather, and it holds a weekly market and bazaar that features various food and craft vendors to educate people about Filipino culture.