Since the early 19th century, the methods and goals of women’s education in America have reflected dominant societal definitions of gender roles. As institutions and programs changed over time, one glimpses how gender itself is a historically constructed concept. The institutions established for educating women in Indianapolis over the years mirror these changes. 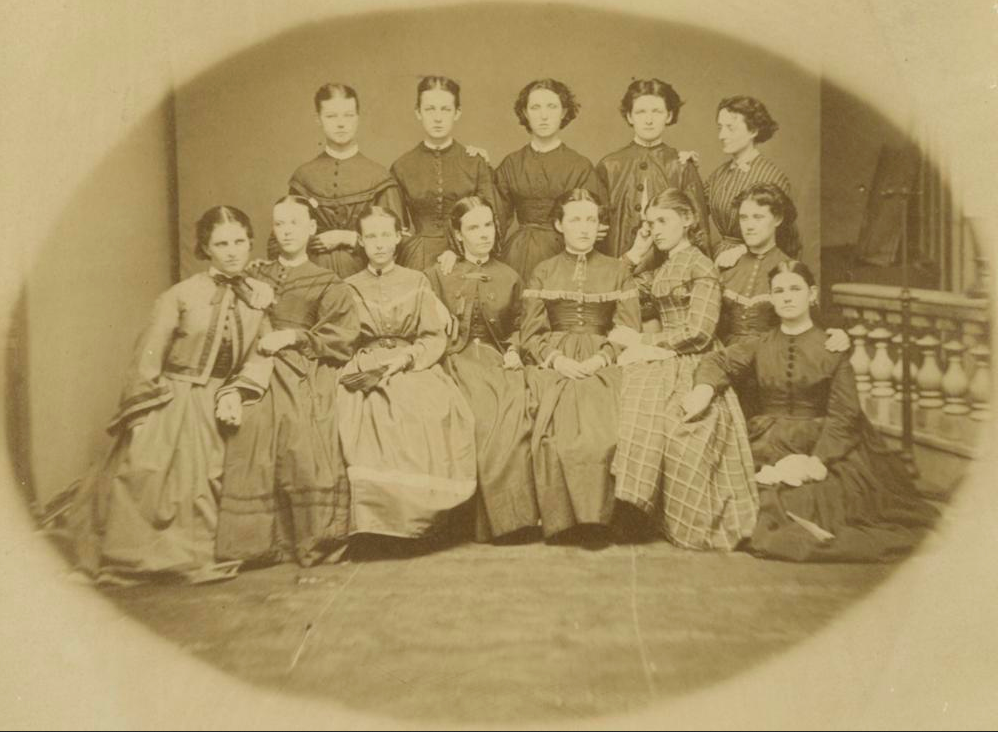 Sarah Parke Morrison in the front row, fourth from left, was the first woman to become a student at Indiana University in 1867. The remaining women pictured became students in 1868.
Credit: Indiana University Archives
View Source

Both institutions prided themselves on teaching women what were known as “accomplishments” rather than rigorous academic pursuits. Their goal was to give women the tools required to move in polite society and be a source of culture in the home. Society expected women to instill these finer values in their husbands and children.

Religious denominations were also instrumental in establishing female educational institutions in 19th-century Indianapolis. Like their secular counterparts, these schools sought to instill domestic and cultural values that would aid women in preserving domestic bliss. Added to this goal, of course, was religious education according to the beliefs of the sponsoring denomination.

The Presbyterian Church was the first religious group to establish a women’s school in Indianapolis when it opened the Indianapolis Female Institute in 1837. After briefly occupying the second story of a building on Washington Street near Meridian, the institute moved to its own building on Pennsylvania Street but closed after 12 years because of the ill health of its director. The Presbyterian church continued its goals by founding the Indianapolis Female Seminary in 1852, which it renamed McLean Seminary in 1860 and operated until 1865.

Other Indianapolis denominations founded female schools during this period. The Episcopalian church operated St. Mary’s Seminary from 1844 to 1849; the Methodists opened the Indianapolis Female College in 1850; and the Baptist church maintained the Indianapolis Young Ladies Institute at the corner of Michigan and Pennsylvania streets from 1858 to 1872. By the late 1870s, the Catholic church was also involved in female education through its three parochial schools for girls.

By the second half of the 19th century, female education began taking on new meanings and precipitating unforeseen results. Ironically it was the very segregation of women’s schools and their emphasis on the supposed female ability to maintain moral standards that provided women with a means to break out of their constricted domestic sphere. Female schools provided the opportunity to hone skills such as public speaking, and to bolster self-esteem, while women used their reputed moral superiority to justify wider participation in public life.

Beginning with the emancipation debate prior to and during the Civil War, and continuing into such issues as temperance, Women’s Rights And Suffrage, women’s and children’s labor regulations, and a wide variety of other morally charged causes, American women increasingly became more vocal in politics. For many, involvement in these public issues was a logical extension of their traditional role. Others brushed gender boundaries aside by entering professions in which their unique attributes as women clearly meshed. Teaching, nursing, and social work were among the professions opened to Indianapolis women that combined traditional domestic values and broader social activism. 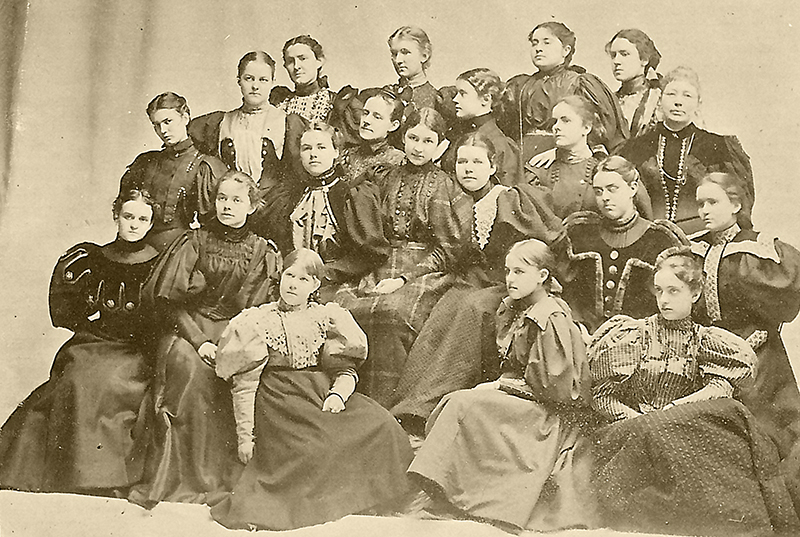 Unlike earlier female schools, “accomplishments” gave way to serious academic study. The main goal of the Classical School for Girls until it closed in 1907 was to provide pupils with the background necessary to gain college admission.

Colleges and universities that admitted women were still very rare in the late 19th century. For the most part, they were concentrated on the East Coast. Indianapolis, however, was home to North Western Christian University (later Butler University), one of the first coeducational institutions of higher education in America, founded in 1855. Indianapolis women who were unable or unwilling to relocate to a distant college could earn a higher degree in their home city. Sixteen of the 66 students in 1856 were females, and 15 of the 51 college preparatory students were girls.

Butler University further encouraged education for and by women when it instituted the Demia Butler Chair of English Literature in 1869. The endowment was the first academic chair in any U.S. university established specifically for a woman, and the first holder of the chair, Catharine Merrill, became the second woman professor in the nation.

Teaching was the profession embraced by most women. Not only was it a socially acceptable job for women, but teaching was also economically unprofitable and, therefore, avoided by men. Ironically, the paltry salaries of teachers created openings into which women flooded. The INDIANAPOLIS PUBLIC SCHOOLS created a Normal School Department in March 1867 to train students of the schools to become teachers in them. By 1884, over half of the Indianapolis public school teachers were graduates of the Normal School, and most of these graduates were women.

By the 20th century, separate female educational institutions were no longer the norm in Indianapolis. Compulsory attendance laws and increasing acceptance of coeducational public schools and colleges diminished the role of gender-segregated schools at all educational levels. However, a handful of parochial and preparatory schools for young women continued to flourish in Indianapolis during the 20th century. Tudor Hall for Girls, founded in 1902, prospered until the 1960s when declining enrollments forced it to eliminate its lower grades and later merge with Park School for Boys in 1970 to become Park Tudor School. 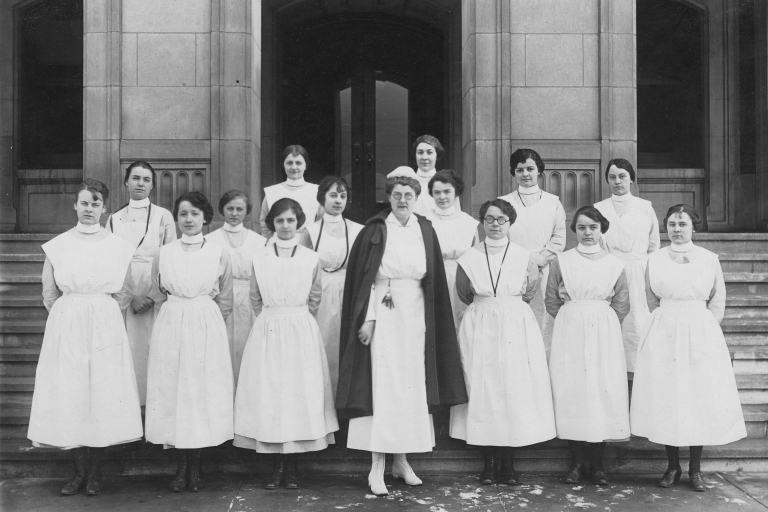 Ethel P. Clarke, center, was director of the IU Training School for Nurses from 1915 to 1931.
Credit: Indiana University
View Source

There were also several Catholic girl’s schools in Indianapolis, including Ladywood, St. Agnes, St. Mary, St. John, and Our Lady of Grace. Declining enrollments in all of these schools also forced the Catholic Archdiocese to combine them in 1969, and in 1976 the Ladywood-St. Agnes campus became coeducational with the merger of Cathedral High School.

The denomination’s only institution for higher learning in Indianapolis, Marian College, was established as a women’s institution in the former James A. Allison Mansion in 1937. It became the state’s first coeducational Catholic university in 1954. At the college level, while women increasingly enrolled in the local schools, traditional courses of study open to women, such as teaching, Nursing, home economics, and Social Work, continued to appeal almost exclusively to women. . As a result of the women’s liberation movement in the 1970s, female students began making significant advances into fields of study not traditionally open to women, such as engineering and law.

During the 1970s local colleges and universities also began to offer courses, academic programs, and even departments focusing exclusively on women’s roles within society which had previously been ignored in most coeducational curriculums.

A group of women educators at Iupui organized the Continuing Education Center for Women in 1975 and merged its offerings with the Department of Women’s Studies in the university’s School of Liberal Arts in the late 1980s. In 1996, IUPUI established the Office for Women and in 1997 initiated a Commission on Women, with working groups that included investigation of such issues as gender issues, learning environment, and curricular content. The University Of Indianapolis inaugurated a Gender Center on its campus.

By the early 1990s, local colleges and universities reported slight female majorities in their overall enrollments and, with the help of outreach programs and with growing numbers of women in traditionally male-dominated courses of study. By 2020, the Marian University student population was 66 percent women and 34 percent men. At Butler University, the ratio was male-female ratio was 40:60, and at IUPUI there were 42 men for every 58 women.