On March 22, 1824, a band of nine Seneca and Miami Indians camped on Fall Creek in nearby Madison County to hunt. Apparently not satisfied that the band’s intentions were peaceful, and under the pretext of asking the Indians’ help in locating lost livestock, a group of six white men slaughtered the males of the party and returned to their camp to kill the women and children. 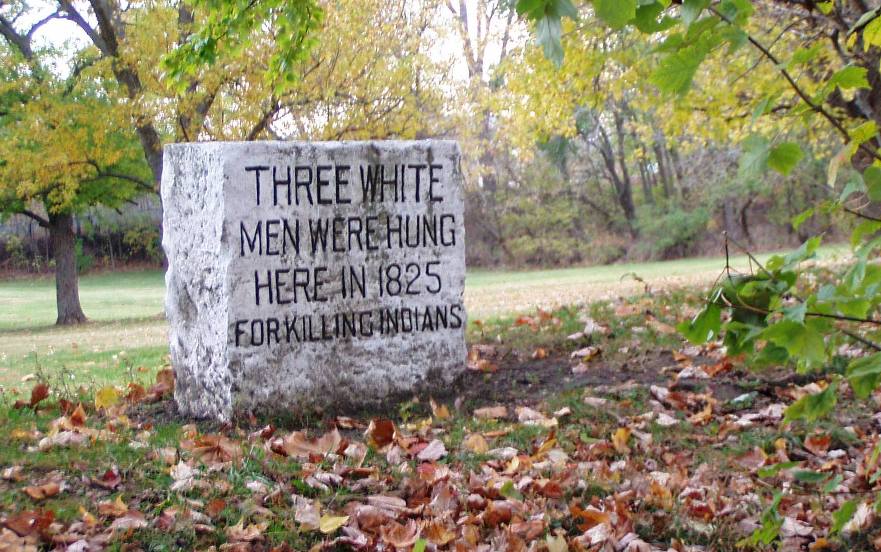 Five of the six alleged murderers were captured within three days and held in Pendleton. The sixth escaped and was never apprehended. John Johnston, Indian agent for the region, with the backing of the U.S. War Department and the help of William Conner, maintained calm among Indians and whites alike. Johnston hoped for a conviction to maintain the credibility of the United States government among the Indians.

An indictment for murder was brought against the five captured men on April 9, but, due to the illness of the presiding judge, the trials did not begin until the October court term. The proceedings attracted some of the leading attorneys in the central part of the state, including the young Calvin Fletcher, an early white settler from Indianapolis. Within three days, James Hudson was found guilty. Despite an appeal to the Indiana Supreme Court and an escape attempt by Hudson, he was hanged for his crime on January 12, 1825.

During the spring court term, three others, Stephen Sawyer and John Bridge, senior and junior, were tried and convicted. The two older men were hanged, but the younger Bridge was pardoned by Governor James M. Ray, who galloped up on horseback from the capital just as the sentence was about to be carried out.

These trials were a landmark in Indian-white relations in the United States. The trials and punishments established a precedent in cases of white aggression toward Indians and likely represent the first significant acknowledgment of the civil rights of Native Americans. Three books were inspired by the case: The Life And Confession Of James Hudson, published by Samuel Woodworth in Indianapolis in 1825, and Jessamyn West’s 1975 fictional account, The Massacre At Fall Creek. More recently, Indiana Historical Society Press published Murder In Their Hearts, by David Thomas Murphy, in 2010.