(Feb. 7, 1867-Mar. 17, 1927). Born in Washington, Indiana, Edward George Spink was the son of a druggist. After studying at St. Mary’s College in Marion County, Kentucky, he worked as a telegrapher. He then moved to Lexington, Kentucky, where he worked at the post office, taught at a commercial college, and became involved in banking and investment. In the mid-1890s, Spink also operated a construction company. 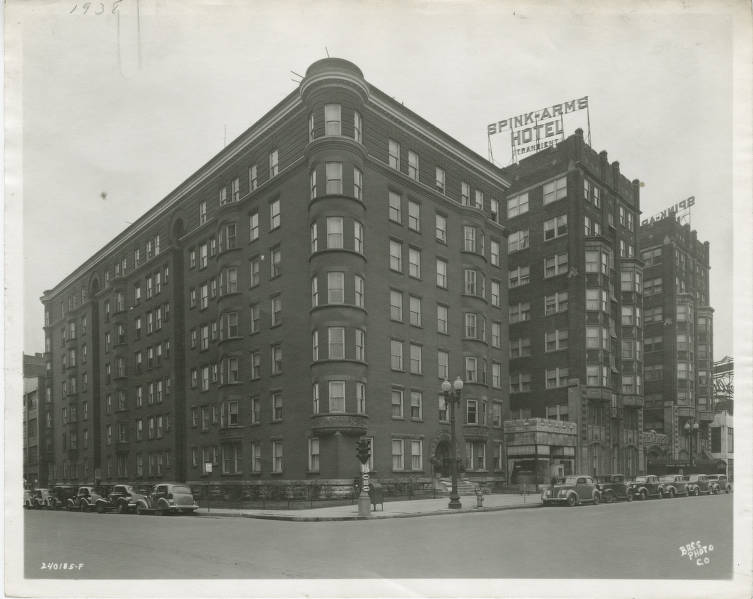 In 1904, he moved to Indianapolis, where his parents and two sisters had relocated, and became associated with the Home Building and Realty Company in real estate sales and construction. In 1912, he formed the E. G. Spink Company.

During World War I, Indianapolis, like many United States cities, suffered from a lack of housing. Spink’s company addressed that problem by constructing large apartment and hotel buildings that contained many small apartments. Spink reputedly began the idea of one- or two-bedroom apartments with kitchenettes in Indianapolis. His apartments were designed to appeal especially to the growing number of “bachelor and professional women” as well as to elderly and newly married couples.

Spink erected over 60 apartment buildings in Indianapolis. Some of the largest are the Hotel Spink at 233-235 South McCrea Street (1924) (now known as One Jackson Square), the Spink-Arms Hotel (1922) located at 230 East 9th Street (placed on the National Register of Historic Places in 2001 and now known as the Continental at Vermont Place), and the Spink-Jefferson (Renaissance Tower) at 230 East 9th Street.  Along with the Spink-Jefferson, the Lodge at 829 Pennsylvania Street is included in the Apartments and Flats Indianapolis Thematic District, placed on the National Register in 1983. Spink also was responsible for the construction of six buildings in the Shortridge-Meridian Street Apartments Historic District, listed on the National Register in 2000. The value of the multi-family residential structures erected by the Spink company exceeded $11 million (over $160 million in 2020).

After an extended illness, Spink died at the Fletcher Sanitorium where his sister, Mary A. Spink, was president. Following his death, his sister became manager of his business enterprises.