The Daily Echo was the first and longest continuously published high school daily newspaper in the nation. It was established at Indianapolis High School in 1898, which changed its name to Shortridge High School at the turn of the 20th century, and continued to be published daily until the end of the academic year in 1970. 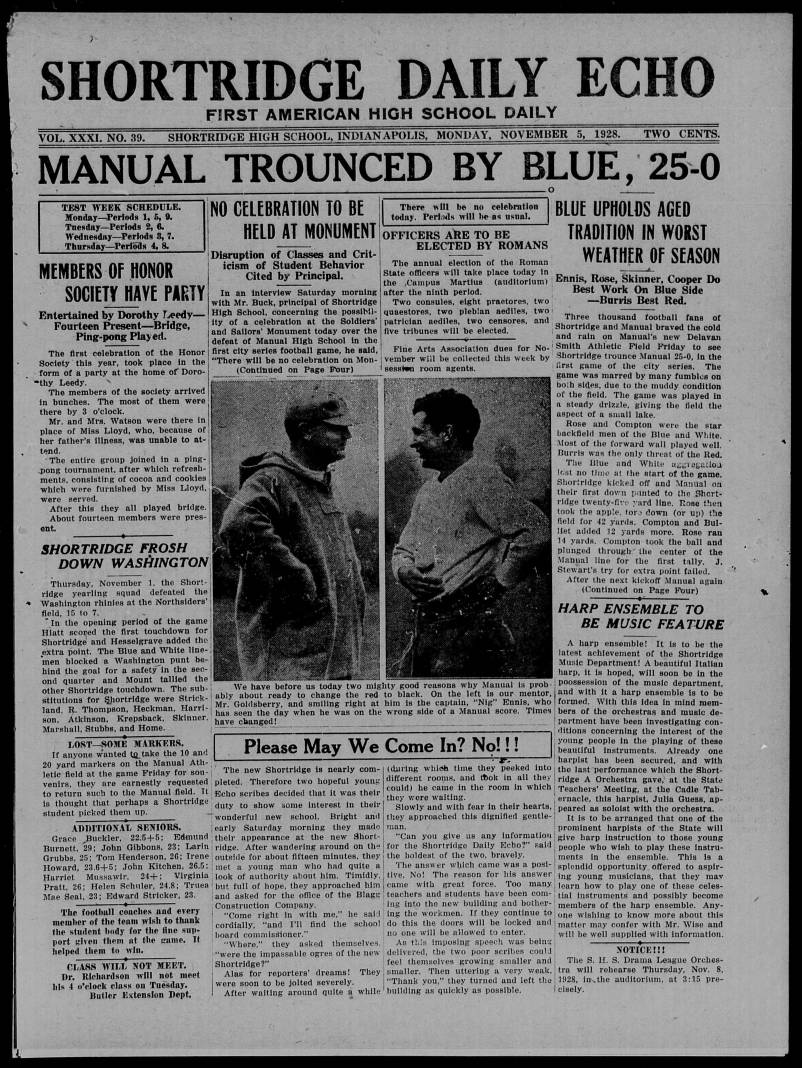 Through the determination of a student, Fletcher Wagner, the newspaper emerged from two aborted attempts to create a daily paper—a fortnightly paper,  Silent Spectator, abandoned after seven issues, and The Comet, a weekly paper that lasted 21 issues. Wagner’s perseverance resulted in the launching of the Daily Echo on September 27, 1898. It consisted of one page with advertisements on the backside. Wagner and two other students served as the paper’s staff until their parents objected to their long working hours.

On November 3, 1898, production ceased. Following an all-school meeting held soon after the newspaper’s demise a committee of faculty and students purchased and managed a printing press. On January 16, 1899, the Daily Echo reappeared as a four-page publication with an editorial staff for each day of the week. The Echo prospered as a daily for 72 years before the format changed during the 1970-1971 school year to an eight-page weekly. Former Echo staff members included U.S. Senator Richard G. Lugar; authors Kurt Vonnegut, Dan Wakefield, Nikki Stoddard Schofield; and Madelyn Pugh Davis, co-creator of the TV series I Love Lucy.

Publication ceased when Shortridge was converted to a junior high school in 1981. In 2015, Shortridge became an International Baccalaureate high school. At a time when student newspapers were disappearing across the country, Shortridge students and staff revived publication of the Dailly Echo in late 2018.

Although Indianapolis was served by several private academies in ...Read More »