Crows Nest is a residential area located south of Kessler Boulevard, west of White River, and east of Lieber Road.

According to Berry Sulgrove’s History Of Indianapolis And Marion County, Indiana (1884), the large number of crows that resided in the trees in the hills above White River in this southwest section of Washington Township led early settlers to give the area its name, originally spelled “Crow’s.”

The land became available for purchase when Marion County Commissioners established the township on April 16, 1822. John Krise bought land in 1830 and built a mill just south of what would later be the intersection of Spring Mill Road and Kessler Boulevard. He deeded a one-acre cemetery off Sunset Lane, which contains two dozen graves including many members of the Zion Evangelical Lutheran Church (circa 1856) later known as Pleasant View Lutheran Church. The Hessongs and Lemings families also farmed the Crows Nest area in the first half of the 19th century.

Most of the farming families who had settled in Crows Nest sold their property during the early 1880s. Crows Nest then became a popular spot for picnics, swimming, and fishing. An article printed in the Indianapolis News on April 23, 1903, identified “Crow’s Nest” as a “Large Summer Colony to the North”. Some families lived in Crows Nest from April to May and then closed them up for the winter to move back closer to town. Judge Solomon Claypool purchased property located on both sides of Spring Mill Road in the early 1880s to use it as a campground and picnic site for his children. The Claypools named the property “Camp Felicity.” George A. Dickson, a theatrical manager who owned the Grand and Park theaters, built an elaborate log house in Crows Nest with an adjoining barn, servants’ quarters, and summer card house. He also built “a veritable ‘crow’s nest’… high in a grand old tree.”

At the turn of the century, the American Country Home movement was thriving throughout the nation. A growing number of people lived in their suburban homes year-round. Albert Lieber, president of the Indianapolis Brewing Company, was one of the leading Indianapolis industrialists who very early made Crows Nest his home. In 1904, he built a farmstead that he named “Vellamada”  on the bluff over the White River. Other early year-round residents included Albert Cole, a physician, and W. Hathaway Simmons, director of the Bemis Bag Company. 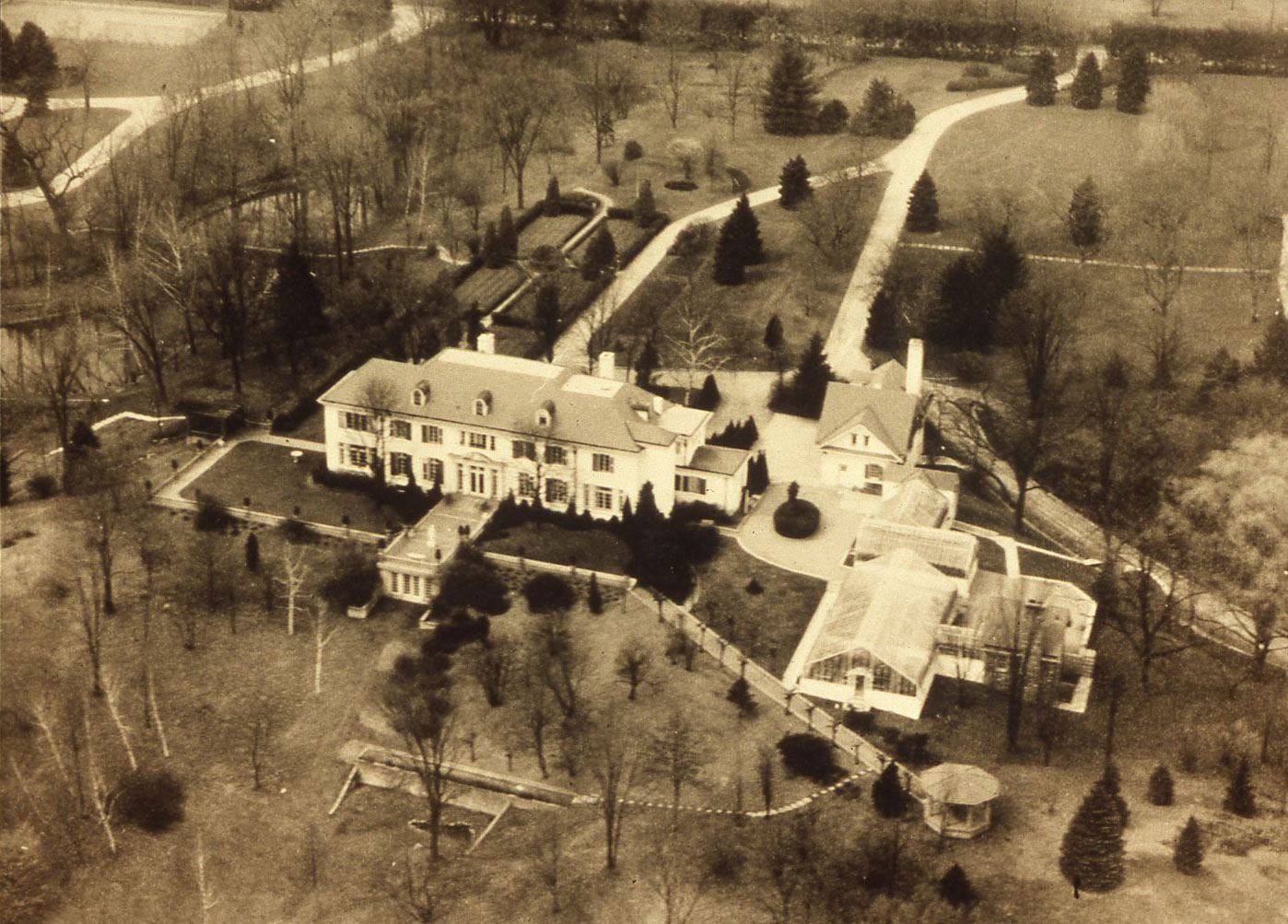 In 1920, at the onset of Prohibition, Lieber sold Vellamada to Frank Stalnaker, president of Indiana National Bank. Stalnaker and his wife Cecilia renamed the 45-acre estate Questover and sold much of the farmland, which became part of Highland Country Club. Stalnaker hired well-known landscape architect Jens Jensen to provide a new landscaping plan.

In 1927, 37 of the residents petitioned for incorporation as the Town of Crows Nest. In August of that year, the Marion County Commissioners voted to approve the petition. The boundaries of the Town of Crows Nest have remained unchanged since that time. By the late 1920s, Crows Nest became an enclave of private estates, ranging in size from 2 to 20 acres and greater along the White River bluff along Sunset Lane, which forms the only entrance to the area. The road curves its way toward White River and then curves west to a turnaround.

Many of the large estates include impressive entrance gates and deep curving lanes. Architects and landscape architects worked together closely “to blend the houses and outbuildings with the natural settings of woods and river.” Some feature formal and naturalistic gardens.

Over the years some of the city’s leading citizens, such as Eli Lilly, Nicholas Noyes, Albert Lieber, Frank Stalnaker, Charles Lynn, Richard Fairbanks, Henry Atkins, Jack and Sarah Goodman, and the Ayres family, all owned properties in Crows Nest. At one time the street known as Sunset Lane was dubbed “Pill Hill” because several executives of the Lilly pharmaceutical company lived there. Many Crows Nest property owners retained the services of noteworthy architects to construct homes befitting their status within the Indianapolis community. Those architects included Robert Frost Daggett, Lee Burns, Vonnegut and Bohn, Edward James, Franz Herting, Frederick Wallick, and Courton Comber. Most structures in the Crows Nest were constructed between 1905 and 1950.

During its early years, residents took turns acting as mayor. Eli Lilly served as mayor three times. Town meetings took place three or four times a year. In 1934, six homeowners along White River, just north of Kessler and east of Spring Mill incorporated as the town of North Crows Nest. Both communities retain their status as separate incorporated communities. In 1957, the Stalnaker property, Questover, was subdivided and renamed Questover Circle.

Crows Nest was placed on the National Register of Historic Places in 2000.