The Christian Church (Disciples of Christ) descend from the 19th-century Stone-Campbell movement, a revival movement that flourished on the developing frontier of the new United States. Early leaders called for preaching God’s unconditional love for sinners made known in Jesus Christ unencumbered by extra-biblical doctrines such as Calvinist teachings of election and predestination. They taught that this message, received in faith (and not through mysterious actions of the Holy Spirit), breaks the sinner’s rebellion against God. They called, too, for restoration of what they believed to be the apostolic (or ancient) order of the church, including congregational governance, the name Christian or Disciple, weekly observance of the Lord’s Supper, and immersion as a divine promise of forgiveness. They asserted that acceptance of the “ancient gospel” and “ancient order” would result in the union of the church. This acceptance, in turn, would lead to the conversion of unbelievers and usher in Christ’s millennial reign of peace and justice.

The organizing minister was John O’Kane, sent to Indianapolis by a missionary organization in Rush County. Other early ministers were Chauncey Butler and Love H. Jameson. In 1866 the congregation began a mission to African Americans that became Second Christian Church (Light Of The World). Second Church conducted a school which became Public School 23. Rufus J. Conrad, the first pastor, was the teacher at the school and a physician.

Along with others across the state, Disciples in Indianapolis established North Western Christian University in 1855, later named Butler University in honor of Indianapolis attorney and Disciples leader Ovid Butler. The location of the university’s first campus at 13th Street and College Avenue led to the organization in 1868 of Third Christian Church. Butler’s move to Irvington in 1875 sparked the development in that year of the First Church of Christ in Irvington, now Downey Avenue Christian Church (Disciples of Christ). Later, University Park and Northwood Christian Churches would benefit from the campus relocation in 1928 to former Fairview Park. By the mid-1870s there were six Indianapolis congregations.

Meanwhile, conflict had begun that by the mid-1890s would result in the separation of a smaller group, the Churches of Christ, from the larger group, the Christian Church or the Disciples of Christ. The major issues were instrumental music in worship and the deployment of missionaries through missionary societies. Some members opposed these practices as not authorized by the apostles; others promoted them as “expedients” for achieving ends that all agreed were apostolic. Members of the Churches of Christ refused Christian fellowship to supporters of the disputed measures. Members of the Christian Churches either advocated the disputed measures or refused to separate over these practices.

In 1878 Joshua Webb, a physician and former preacher withdrew from Central Christian Church over the use of an organ in worship. By 1885 the Speedway Church of Christ had been established in West Indianapolis that was opposed to all “innovations.” In the 1890s, a pro-instrument faction of the newly formed North Church (now Emerson Avenue) took the non-instrumental faction to court over control of the property. The court decided in favor of the non-instrumental faction. In 1892, the combined membership of West and North churches was only 135. By contrast, the combined membership of the six churches that entered the Christian Church Union of Indianapolis and Marion County (a Disciples association) was 1,970. Notable numerical growth of Churches of Christ in Indianapolis began only after World War I.

Among the societies supported by Disciples was the Christian Woman’s Board of Missions (CWBM), organized in 1874. Several early officers were Indianapolis women, including its first president, Mrs. P. H. (Maria) Jameson, and Indianapolis became headquarters of the organization. CWBM sponsored evangelistic and service ministries around the globe. From 1912 to 1923 it provided the primary support for Flanner House, a social settlement. In the 1960s a successor organization provided support for similar ministries through the Broadway Mission. 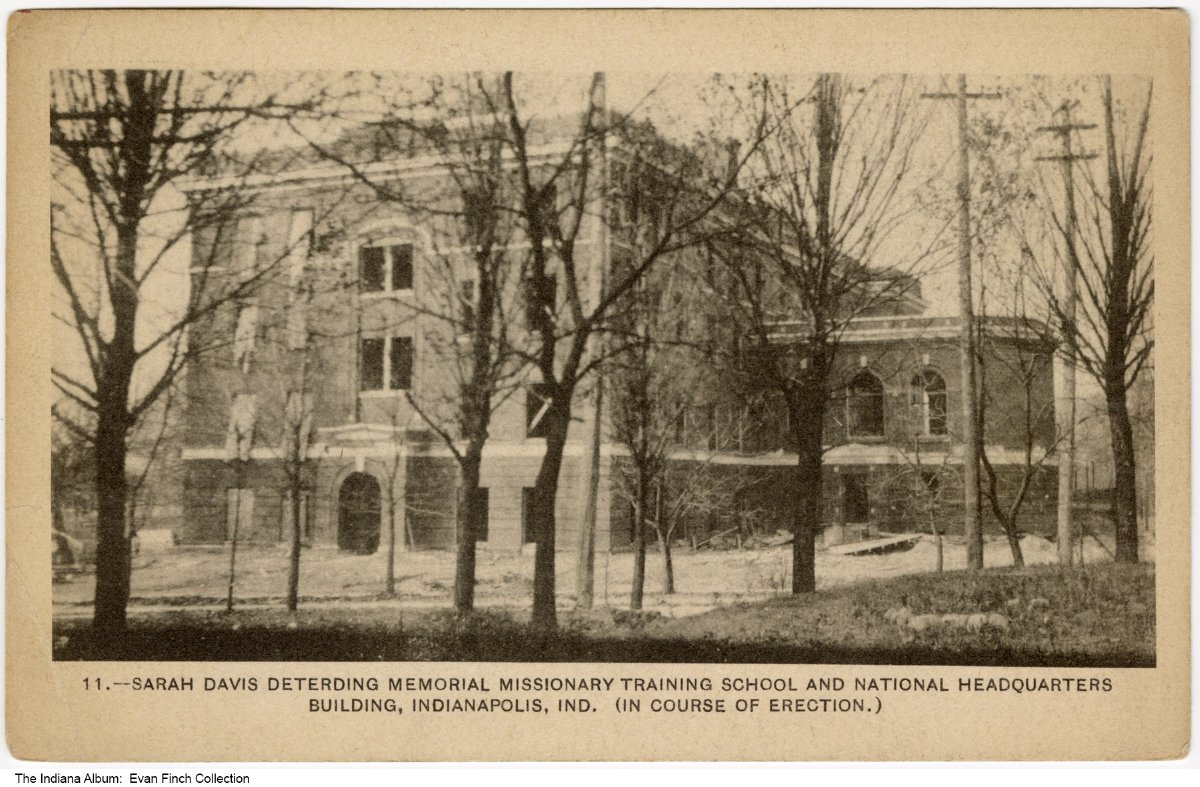 During the late 19th and early 20th centuries, Indianapolis became the national headquarters for other Disciples’ activities. In 1895 the Board of Ministerial Relief (reorganized in 1928 as the Pension Fund) was established in Indianapolis. Howard Gale, a legal associate of Benjamin Harrison, was its first president.

In 1911, CWBM opened the College of Missions on the Butler campus in Irvington, which trained just over 400 women and men for service in Disciples of Christ foreign missions. The College transferred operations to Hartford, Connecticut, in 1928. Simultaneously, the lease expired on the St. Louis offices of the United Christian Missionary Society (UCMS), an organization formed in 1919 by the union of the CWBM and other general organizations of the Disciples. Thus, in 1928, 222 Downey Avenue became headquarters of UCMS—the major Disciples denominational organization. The so-called “Missions Building” remained the main denominational headquarters until it was sold in 1996 and transitioned to public housing.

UCMS’s move to Indianapolis coincided with the widening of a fissure in the Disciples that would result in the separation of the Independent Christian Churches and the Christian Church (Disciples of Christ). At issue was the support of UCMS and the closely related International Convention of the Disciples of Christ. In 1927 opponents established the North American Christian Convention as an alternative to the International Convention and began a movement to support missions “independently” of UCMS.

Underlying this new split was a dispute over the communion’s relation to the emerging ecumenical movement. Closely related was the stand of different leaders to the liberal theology and approach to the Bible also emerging among American Protestants. Theological liberals held that failure to recognize “the denominations” as churches promoted denominationalism. Opponents of liberal theology argued that recognizing the denominations as churches condoned denominationalism. They insisted that genuine Christian union could be achieved only by Christians rejecting their denominations for the apostolic, or New Testament, church as historically discerned by the Disciples.

Four decades later, in 1968, a plan for restructuring denominational organizations supported by cooperatives was approved by the International Convention. Over the next decade, almost half of the congregations listed in denominational records formally withdrew from the Disciples. A widely propagated false assertion that unless congregations withdrew from the Disciples by a certain date they would lose control of their property impelled this action. The Independents asked to be listed as a separate body in the Yearbook Of American Churches three years later.

Butler University remained a church-related school through World War II. Hilton U. Brown, president of the Butler board from 1903 to 1955, was an active Disciple. In 1925 Butler established a College of Religion, later named the School of Religion, to provide specialized education for ministry, with a new building (Robertson Hall) completed in 1942.

After the war, Butler increasingly gained support apart from the churches. In 1958 an amicable separation was negotiated between the School of Religion, which desired larger facilities and a definite relationship to the Disciples, and the university, which needed the school’s building and surrounding property for other purposes.

The former School of Religion incorporated as Christian Theological Seminary and located itself on land adjoining the west end of the Butler campus. In 1978 Butler University officially severed its church relationship altogether. The Seminary, which boasts an ecumenical character, has maintained ties to the Christian Church (Disciples of Christ). In 2017, the seminary sold its buildings and most of its land to Butler University and entered into a long-term lease agreement to continue its operations.