In 1999, Bart Peterson campaigned for mayor on a promise to bring charter schools to Indianapolis. He argued that it offered school choice for students and families, spurred innovations in public education, and improved an outdated public school model. Significantly, he believed that the more than 50 percent drop-out rate for graduates at Indianapolis Public Schools could be traced to a  one-size-fits-all formula that did not work for many students. The numbers were worse for African American students who had a dropout rate of 80 percent. Candidate Peterson testified before the Indiana Senate Education Committee about his charter school plan, after which state senator Theresa Lubbers, a Republican who represented a northern Indianapolis district, included the provision in her bill authorizing charter schools.

In 2001, Lubbers and the Indiana State Teachers Association (ISTA) reached a compromise that paved the way for the passage of charter school legislation. The compromise restored collective bargaining power for teachers and required all charter school teachers to be certified through a three-year “Transition to Teaching” program. The legislation allowed state universities and local school boards to have authorizing power along with the mayor. Vesting the mayor as a charter school authorizer provided the combination of freedom and accountability that the teachers union desired. The charter school bill passed the Senate in April 2001 and was signed into law by Democratic Indiana governor Frank O’Bannon.

After the passage of the charter school law, Peterson invited David Harris, a lawyer at Indianapolis-based Baker & Daniels, to develop the administration’s education policy. Harris spent five years as Peterson’s charter schools director and built what advocates considered a national model of a charter school office. He recruited a roster of outside experts in nonprofit organizations and the private sector to work with the mayor’s office on application and accountability standards.

The Annie E. Casey Foundation was looking to invest in education reform and quickly turned to Indianapolis after 2001. It provided funds to build the infrastructure of the charter school office, establish the city’s accountability and reporting system, and help underwrite school construction for charter schools in Indianapolis. The city entered education reform with charter schools 10 years after the first schools opened in Minnesota, which meant that Peterson’s team could learn from experiences elsewhere.

Thirty-one letters of intent and 21 applications for charters were submitted in the first year, yet only four charters were granted. One of those went to philanthropist christel dehaan, who in 1998 had already opened Christel House schools with locations in India, Africa, and Mexico. Another charter went to the Flanner House, a local social-services agency dating to 1898. Peterson later granted charters within IPS, as well as the 10 other districts serving the townships of Beech Grove, Decatur, Franklin, Lawrence, Perry, Pike, Speedway, Warren, Washington, and Wayne. Each township maintained its own superintendent. 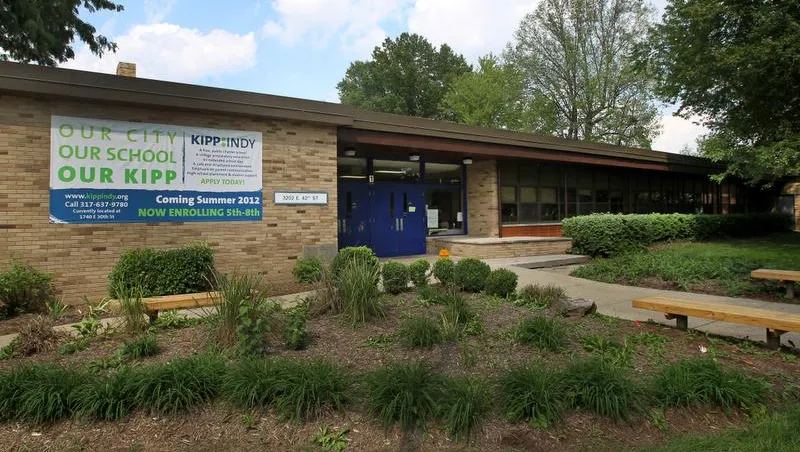 In Washington Township, superintendent Eugene White, a pro-charter school advocate, chose to implement the KIPP (Knowledge is Power Program) model when the national network of open-enrollment college preparatory schools in low-income communities was looking to expand in Indianapolis. When White became superintendent of IPS in 2005, he invited KIPP to share an IPS building and brokered a deal with the ISTA that allowed KIPP’s principals to enter a training program demanded by the KIPP model. The KIPP initiative continues to stand in direct competition with the city’s charter schools and private schools, but this type of rivalry and cooperation is what Peterson’s administration wanted in its effort to offer choices to students and parents.

In January 2005, Harris left the Peterson Administration to develop The Mind Trust, a nonprofit organization with a mission to reform public education through charter schools. To achieve its mission, The Mind Trust funds the Education Entrepreneur Fellowship to develop and launch education ventures; it uses a venture fund to recruit to Indianapolis entrepreneurial education initiatives; and it serves as a charter school incubator that awards $1 million in funding, as well as support and training to leadership teams that intend to start a network of charter schools in Indianapolis. The Richard M. Fairbanks Foundation provided critical start-up funding for The Mind Trust as well as additional funding for key operational expenses through 2010.

Harris envisioned The Mind Trust as the solution to accelerate the growth of charter schools by taking care of staffing shortages. To accomplish this, the Mind Trust’s venture capital fund successfully recruited talent by convincing Teach For America (TFA), The New Teacher Project (now TNTP), and Stand for Children to come to Indianapolis in part by raising money for these outfits. By 2008, TFA had brought more than 500 teachers and 39 school leaders, TNTP had trained 498 teachers, and Stand for Children had engaged the community by educating parents about school reform. The latter organization also fundraised for school board candidates.

Between 2001 and 2008, when he left office, Peterson authorized 16 charter schools and closed one (Flanner House), serving 3,870 students. His successor, Republican mayor Greg Ballard, had similar success, authorizing nine schools between 2008 and 2011. During his tenure, he closed two charters, The Fountain Square Academy and the Project School. The former school found a new sponsor in Ball State University, which was the first public university to authorize charter schools after the passage of the charter school legislation in 2001.

Having multiple authorizers provided for distinct types of support as well as different standards. Legislation passed in 2011 made it easier for groups to start a charter school, but it also gave the Indiana Department of Education more authority to intervene if these schools underperformed.

In Indianapolis, charters continue to enjoy strong support and have forged an alliance with IPS to turn around or run schools within the district through The Mind Trust’s Innovation School Network model. A 2014 state law permits school districts to convert, open new, or restart existing schools as an Innovation School with its own 501(c)3 nonprofit board. IPS schools with a “D” or “F” grade for three consecutive years qualify for conversion to Innovation School status.

In 2021, Innovation Schools Network has 20 schools in Indianapolis. Twenty-eight percent of IPS students attend these schools which come in an array of forms including Dual Language Immersion, Classical Liberal Arts, Blended Learning, Social Identity-based Learning, Industry Focused Experiential Learning, and Study Abroad. There has been a 15 percent increase in enrollment at IPS schools that have converted to the Innovation School Network plan.

Purdue University entered the charter school movement in 2017 by launching Purdue Polytechnic High School in Indianapolis. It opened a second in Indianapolis’ Broad Ripple neighborhood in 2019.

An art piece of building blocks in the lobby at the Purdue Polytechnic High School in the P.R. Mallory Building, 2020
Credit: Kelly Wilkinson/IndyStar via Imagn Content Services, LLC
View Source

The charter schools’ movement in Indianapolis has not been without its own problems and controversies. In 2005 the Flanner House Center for Higher Learning showed signs of deep dysfunction. Two principals in two years, mismanaged finances, and questionable reporting on ISTEP results, graduation rates, and enrollment led Mayor Peterson to close the school.

In 2012, Tony Bennett, former state superintendent of schools in Indiana, was forced to resign as Florida’s education chief when emails revealed that he had discussed how to change Indiana’s grading formula to boost the low marks of an Indianapolis charter run by a prominent Republican donor, Christel DeHaan.

In 2021, Indianapolis was home to 65 charter schools. Among those are a KIPP school, an alternative high school run by Goodwill Industries, a Spanish dual-language immersion school, a school for recovering drug addicts, two schools that are geared towards serving children with disabilities, and two classical high schools including Herron High School. A study that the University of Arkansas and the Reason Foundation released in February 2021 found Indianapolis charters were 78 percent more cost-effective than traditional Indianapolis public schools.