The campus of Butler University occupies 290 acres on the city’s northside, with its principal entrance on the east at 46th Street and Sunset Avenue. The present campus is the third location for the university. The first was on the city’s near northside at the eastern edge of the present Old Northside Historic District, on land provided by lawyer and educator Ovid Butler. Its buildings, none of which survive, had been designed by Irish-born architect William Tinsley, whose work also included Christ Church Cathedral.

In the mid-1870s, the university, first known as North Western Christian, moved to the newly platted town of Irvington, where it remained until 1928. In 1877, the school was renamed for Ovid Butler. The Irvington campus consisted of 25 acres and several buildings, including an observatory, most of which was demolished in 1939. The Bona Thompson Library (1902-1903) at the intersection of Downey and University avenues, designed by architects Dupont and Johnson, is the only extant university building in Irvington, although several dwellings that once housed faculty still remain, most notably the Benton House.

Increased enrollments following World War I prompted the administration to consider a new, larger campus location. The campus was ultimately laid out with assistance from noted landscape architect George Sheridan on the site of Fairview Park, a former amusement park at a streetcar terminus on the city’s northwest side.

At its present location, Butler’s first and for years its primary building was Arthur Jordan Memorial Hall, designed by Robert Frost Daggett and Thomas Hibben in 1927 and opened the following year. The structure’s Collegiate Gothic style set the tone for subsequent buildings elected over the next three decades.

Also in 1928, the Butler Fieldhouse (later renamed Hinkle Fieldhouse) by architect Fermor Spencer Cannon was completed. The building remained the largest indoor sports facility in the state until the mid- 1960s. The Williamsburg-inspired Religion Building and Sweeney Chapel (remodeled into Robertson Hall in 1966) designed by Burns And James were completed in 1942. Other than that, there was little construction on the campus until after World War II, except for numerous fraternity houses, mostly along Hampton Drive.

Postwar construction began with the Student Union Building (later; Atherton Center, remodeled and expanded in 1993) by Mcguire And Shook, completed in 1950. In the mid-1950s the firm also designed the two large dormitories, Ross Hall, originally for men, and Schwitzer Hall for women, both on Hampton Drive. North of Jordan Hall the visually compatible Pharmacy Building, also designed by McGuire and Shook, was erected in 1954.

Along the Central Canal industrialist and philanthropist J. I. Holcomb in 1950 designed the gardens bearing his name, with assistance from Art Lindberg, Butler’s superintendent of buildings and grounds. Safety concerns at Holcomb Gardens in recent decades have prompted the removal of several acres of woodland and the thinning of vegetation, diminishing somewhat the Romantic landscape that its namesake envisioned. Lindberg, with help from Daggett, also designed the Holcomb Observatory, dedicated in 1955.

Next to the fieldhouse the Hilton U. Brown Theater, designed by Lennox and Matthews, was completed the same year; but without the roof that was added much later. What had once been the Arthur Jordan Conservatory of Music (later renamed the jordan college of the arts) moved onto the campus and into its new home, Lilly Hall, in 1962. The following year Clowes Memorial Hall, the cultural center of the campus and for years of the Indianapolis community as a whole, opened. It remains one of the finest works of architect evans woollen, in association with John Johansen. The gleaming white Irwin Library, designed by Minoru Yamasaki, stirred even more comment when it opened in 1963.

From 1963 to 1973 there was no major construction on the Butler campus, until the science complex, consisting of the Holcomb Research Institute and Gallahue Hall, filled the gap between Jordan Hall and the Pharmacy Building to form a solid “U” at the terminus of 46th Street. Another decade passed before a new building to house the Special Instruction Division (formerly located on the Holcomb estate off Cold Spring Road) was constructed at the far northeast corner of the campus at 52nd Street and Boulevard Place. 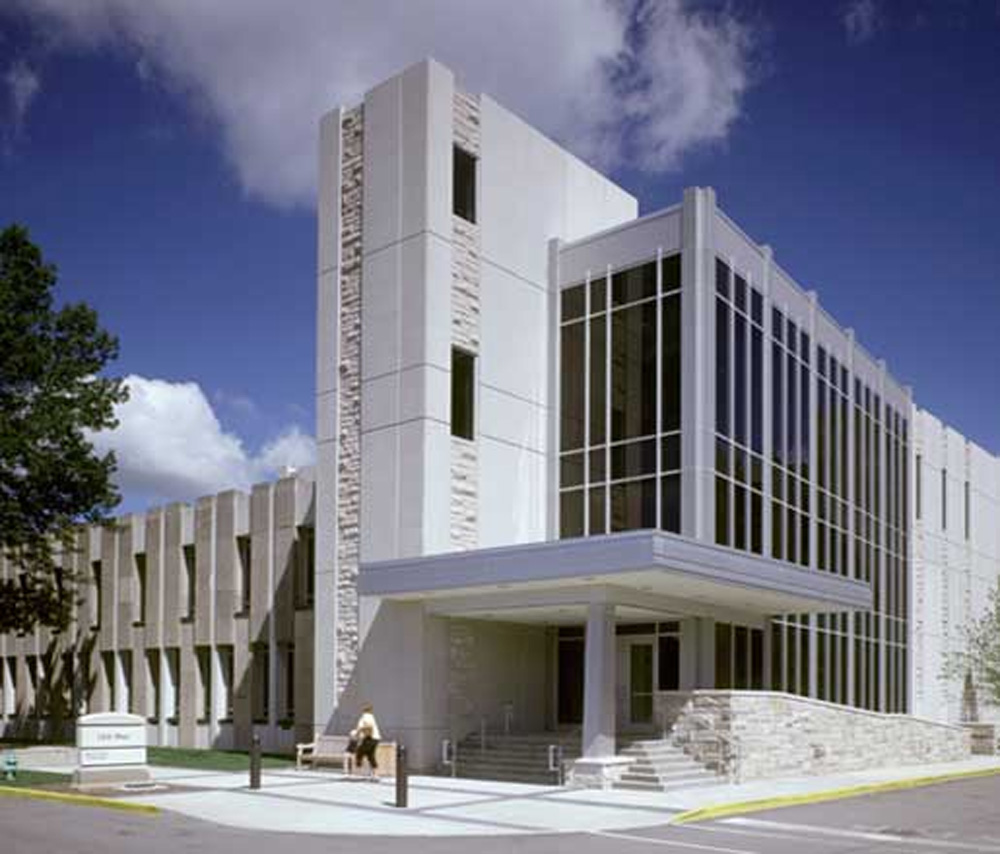 The late 1980s and early 1990s, however, brought a major reconfiguration of the campus, with the conversion of the 4600 block of Clarendon Road into a grass-filled pedestrian mall and the construction at the corner of Sunset and Hampton of the innovative Residential College, designed by James And Associates in 1990.

The turn of the millennium signaled a new era for Butler with master plans calling for major campus improvements over the next two decades. The new Fairbanks Center building was the first addition to campus. This new building, which houses the College of Communications and is located immediately west of the historic Jordan Hall, was designed by Browning Day Mullins Dierdorf (BDMD). One year later, the Lilly Hall Infill, also designed by BDMD, was completed. The Lilly Hall Infill was added to the existing Lilly Hall to provide additional music and dance studios.

With the student body rapidly growing, space for student activities and living was at an ever-increasing level of demand. In 2006, the northside of Butler’s campus was developed to house a new state-of-the-art Health and Recreation Center, designed by Moody Nolan Architects, and the 508-bed Apartment Village, designed by RATIO Architects that spans from 49th St. to 52nd St. Concurrently, the dated Starlight Musicals amphitheater was demolished to make way for an improved Butler Bowl. Later in 2011, the Butler Bowl went through another round of upgrades that provided all new bleacher seating and a new press box, designed by OMS Architects.

During the boom of increasing enrollment at Butler, the College of Pharmacy and Health Science was in dire need of more space. With BDMD as architect, the College of Pharmacy and Health Sciences Addition, which provided the college with over double the space they previously had, was completed in 2009 and became Butler’s first LEED Gold building on campus.

At the same time the Schrott Center completed construction, the Athletic Department commissioned RATIO Architects and AECOM Architects to begin designs for a newly upgraded and renovated Hinkle Fieldhouse. By this point, Hinkle Fieldhouse was over 80 years old and had not undergone any significant upgrades. This $34 million project aimed to restore the building to its original grandeur while also improving athletic support spaces. The project was completed in 2014 and provided Athletics with all new locker rooms, strength and conditioning spaces, and new offices for coaches and staff, all while restoring Hinkle to its original charm and achieving LEED Gold. Later in 2019, phase two of this project was completed, which provided a complete renovation of the Efroymson Family Practice Gym along with air conditioning and state-of-the-art sports lighting for the main arena.

For the first time in Butler’s existence, the campus found itself in a severe parking shortage. With all of the new construction that had occurred and the forecasted construction that had yet to occur, the campus no longer had room for surface parking lots. The campus could not continue to build without the parking required. Thus, by 2016 Butler built its first parking garage at the corner of Sunset Avenue and Lake Road. The new parking garage, which houses 1,025 parking spots, was designed by CSO Architects and is clad with the predominant campus materials of red brick and limestone.

Designed by Solomon Cordwell Benz (SCB) out of Chicago, Illinois, Fairview House took the place of a large and unsightly parking lot at Butler’s main entrance at Sunset Drive and 46th Street. Two years later, again in conjunction with ACC and SCB, the second new residence hall, Irvington House, was complete. Irvington House, a 647-bed suite-style residence hall, took the place of Schwitzer Hall, the old women’s residence hall. Fortunately, much of the limestone from Schwitzer Hall was salvaged and continues to be used around campus for various projects.

By late 2018, Butler reached another major milestone in its aggressive master planning effort by completing construction on the 110,000 square-foot Business Building that houses the Lacy School of Business. The building was designed by CSO Architects and Goody Clancy & Associates. Located close to the main entrance on The Butler Way (46th Streeet), it provided the Lacy School of Business with its first structure of its own.

One year later, in late 2019, Butler kicked off construction of its largest project to date, the $100 million, 250,000-square-foot Sciences Renovation and Expansion. Designed by BSA LifeStructures as architect of record and BDMD as envelope and landscape architect, the project aimed to completely renovate the dated 1972 Gallahue Hall and Holcomb Building, while also constructing a new building and a new atrium to connect the three buildings.