Bounded by the Central Canal, Meridian Street (west side), 38th Street, and Michigan Road and named for Butler University and former resident and Pulitzer Prize-winning Hoosier author Booth Tarkington, the 920-acre area is a consolidation of numerous 19th -century farms, a few homes of which still stand. Two key factors reflecting Indianapolis’s urban growth in the early 20th century contributed to the development of the Butler-Tarkington neighborhood. The popularity of North Meridian Street as a prime residential address and Butler University’s acquisition of and relocation to Fairview Park in 1928 created a substantial area of desirable home sites located in between.

German farming families settled the area around Illinois and 38th streets as early as the 1840s. The farming village took the name Mapleton to reflect the surrounding grove of sugar maples and served as a rest stop for travelers from Indianapolis to Broad Ripple and beyond. In the 1860s the connection to Indianapolis strengthened when the streetcar line extended to where Crown Hill Cemetery would eventually be built in 1875.

By the 1880s, Mapleton supported a thriving rural economy with a general store, post office, livery stables, school, and Sugar Grove Methodist Mission. Most of the roughly 300 residents lived along the corridor from Meridian Street to Crown Hill Cemetery. The tight-knit neighborhood connected at church socials and annual sausage-and-sauerkraut dinners.

Improvements in transportation changed the bucolic lifestyle in Mapleton. In 1889 the Citizens Street Railway Company purchased a 246-acre lot along the central canal to develop the “suburban” Fairview Park.

However, by the turn of the 20th century, and particularly between 1910 and 1920, the farms of the mid-19th century made way for middle-class bungalows, located in the south-central portion of the area, north of Maple Road (38th Street) and along Illinois Street, Capitol Avenue, and Boulevard Place. These small, narrow “suburban” homes stood close to the street along the streetcar line to Fairview Park.

The Butler-Tarkington Neighborhood Association, established in 1956 to “conserve and improve” the neighborhood, continues to serve the area. Its establishment is traced to the time after working-class African Americans moved to the area and unprincipled investors scared white families to sell their homes at a loss. To quell racial tensions the neighborhood association formed in what has been hailed as not only one of the oldest continuously operating neighborhood associations in the nation but as one of Indianapolis’ earliest and most successful integrations.

Though Butler-Tarkington is known as an example of a successful racially integrated neighborhood, other important facets contribute to its unique character. The neighborhood is known for its schools, churches, cultural institutions, and small commercial areas.

The first school opened in the village of Mapleton in 1883. That school later became Indianapolis Public School 43 and moved to a structure at 150 West 40th Street in 1909.

In 1922 Mary Stewart Carey established Orchard Country Day School, a progressive elementary school, in her home at 5050 North Meridian Street. That school later moved to 610 West 42nd Street in 1927 where it remained until 1957. Carey founded the Children’s Museum of Indianapolis in 1925 with an initial location inside the carriage house at the Propylaeum. The museum later moved to Garfield park, then inside Carey’s mansion at 1150 North Meridian Street, until finally establishing itself at 3010 North Meridian Street, just south of Butler-Tarkington. IPS School 86 opened in 1928 the same year Butler University opened on its Fairview Campus. St. Thomas Aquinas opened its school for kindergarteners through eighth grade in 1939.

The Orchard Country Day School moved out of the neighborhood in 1957. The Parents and Friends of Retarded Children, Inc, and Noble II purchased the property and opened a school that same year. Christian Theological Seminary opened its campus in 1966. The Noble School moved out in 1971 but the Sycamore School for gifted children opened on part of the property in 1985 until it outgrew the space and moved out of the neighborhood in 1989.

The International School Of Indiana opened its doors at 612 W. 42nd Street during the 1994-1995 school year. It established its pre-kindergarten through grade 5 classes in the 1940s schoolhouse leased by Butler University. Most of the school’s facilities are situated on 60 acres in the Butler-Tarkington neighborhood just north of Newfields.

The Butler University campus provides a solid source of cultural institutions for Butler-Tarkington, with much of its non-residential acreage devoted to the university and its institutions. Clowes Memorial Hall, Hinkle Fieldhouse, Holcomb Observatory And Planetarium, Jordan College Of The Arts, the Schrott Center For The Arts, Irwin Library, and Newfields, supply the neighborhood residents with cultural offerings all within walking distance of area homes.

From 1954 to 2005 the Hilton U. Brown Theatre, home to Starlight Musicals furnished Butler-Tarkington residents with live musical productions in an outdoor setting. Due to waning support for this type of musical production Starlight Musicals ceased ticket sales in 1993 and the outdoor theatre was demolished in 2005 to make way for Butler University’s new student-housing complex, Apartment Village.

Most of the churches in the Butler-Tarkington neighborhood moved in tandem with the middle-class downtown residents who migrated north of 38th Street in the 1920s. However, the earliest known religious institution in the neighborhood was the Sugar Grove Mission organized as a small country church in 1843 at 48 West Maple Road (38th Street). In 1855 the mission moved to the corner of Maple Road and Meridian Street and took the name Sugar Grove Methodist Episcopal Church. As it grew the congregation moved from a log house to a log schoolhouse. The congregation then erected a small building on its property at Illinois and Meridian streets, which became known as Mapleton Methodist Episcopal Church.

As the city expanded north of Fall Creek, another Methodist Episcopl Church congregation took root south of Crown Hill Cemetery. The Capitol Avenue Methodist Church was first organized in 1894 as Hyde Park Methodist at 30th and Illinois streets. This congregation was segregated, and when the church refused to accept Black members and its white parishioners moved to houses and congregations in other parts of the city, it folded in 1954. Capitol Avenue subsequently refused to give its building to a Black congregation until the Indiana Methodist Conference took possession of the property.

In 1925, Mapleton Methodist broke ground on a new Gothic-revival style structure. Mapleton merged with North Church during this time and reorganized, taking the latter congregation’s name. Dedication of the building, located at 3803 N. Meridian Street, took place in 1931.

Other churches moved into the area from 1920 to 1940, including Fairview Presbyterian, St. Thomas Aquinas Church, and University Park Christian Church. One of the last churches to move from the city center to Butler-Tarkington was the Meridian Street Methodist Church. This church merged with the 51st Street Methodist Church in 1947 and relocated from its longstanding home at Meridian and St. Clair streets to a newly built 550-seat structure at 5500 North Meridian Street in 1952.

Several social services appeared in the Butler-Tarkington neighborhood beginning in 1890. Oscar Carleton McCulloch, pastor at Plymouth Church located on the northwest quadrant of Monument Circle opened the Summer Mission For Sick Children (Fresh Air Mission), in a section of Fairview Park. The Mission provided summer camp in the fresh air for inner-city children and their mothers. The Mission’s outreach expanded to include dormitories, a hospital, a dispensary, and a camp for tuberculosis patients. When the camp closed in 1924 Butler University purchased the property upon which the university established its campus in 1928. 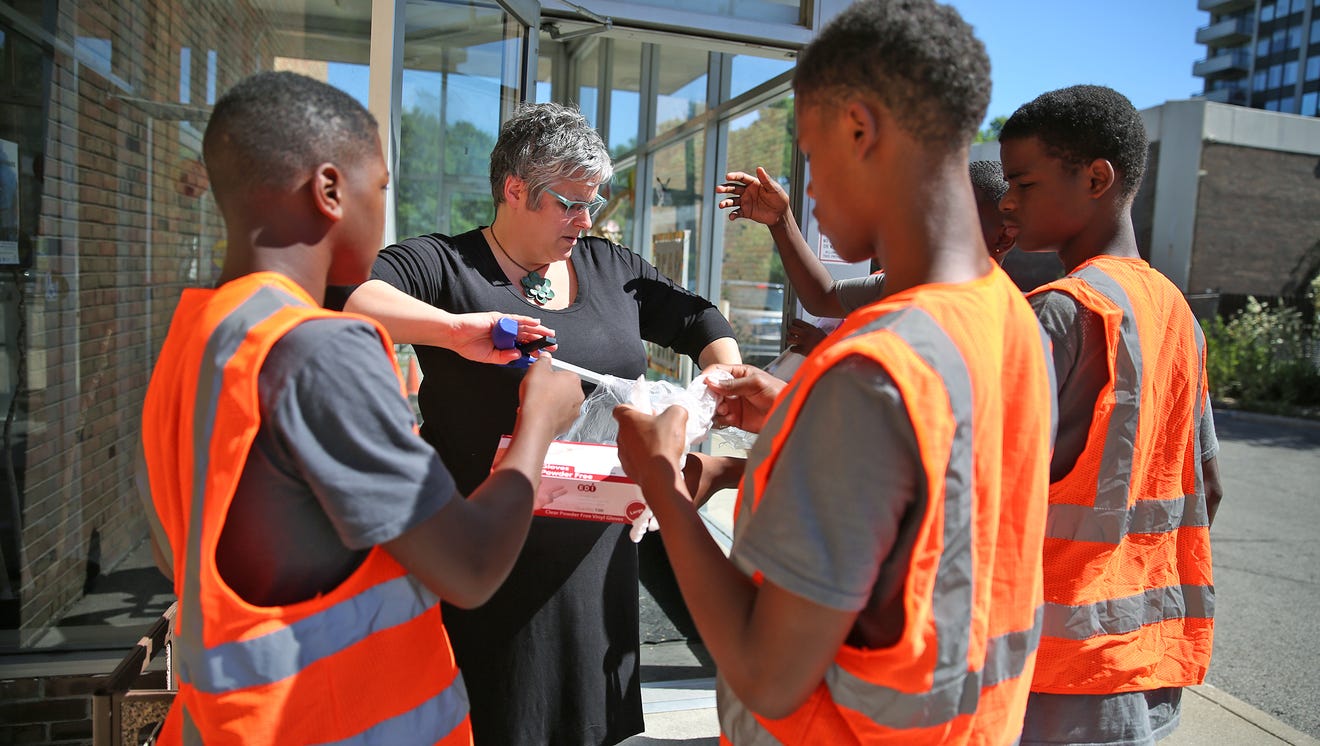 The Metropolitan Area Citizen’s Organization worked with the North United Methodist Church in the early part of the 1970s to establish community outreach programs. A coalition of churches, businesses, and residents was formed with a focus to improve community life for area youth as well as adults.

In 1972 the Butler-Tarkington Multi-Service Center opened to provide safe recreation space for area youth. Programming expanded to include drug prevention courses and an emergency food pantry. In 1983 the center changed its name to the Martin Luther King Multi-Service Center. The center broadened its service area to include the Mapleton-Fall Creek and Meridian Kessler neighborhoods.

Elderly residents in Butler Tarkington have benefited from the Bread ‘n Bowl Program started in the 1980s and the Mid-North Shepherd’s Center which opened in 1982 as another source of social services for the elderly.

Between World War I and World War II, the stretch of Meridian Street between 40th Street and Westfield Boulevard in Butler-Tarkington became home to the wealthy and social elite of Indianapolis. Besides Booth Tarkington, the neighborhood has been home to several influential individuals including Larue D. Carter, Frank E. Mckinney Sr., Phillip R. Mallory, and David Laurance Chambers. Since 1975, when the State of Indiana acquired 4750 North Meridian Street for the official Governor’s Residence, the neighborhood has also been home to Indiana’s governors. The North Meridian Street Historic District was listed on the National Register of Historic Places in 1986.

The tight-knit neighborhood gathers annually at St. Thomas Aquinas School which maintains the annual sausage and sauerkraut tradition that started during the early days when Butler-Tarkington was a small farming village. Since 2004 the school features delicious sausage from L. E. Kincaid and Sons, one of the dozen or so businesses at the 56th and Illinois streets commercial district in Butler-Tarkington.

Into the 21st century, Butler-Tarkington has maintained a stable population of approximately 9,700 residents. The neighborhood is home to a well-educated population with 66 percent of residents having at least a bachelor’s degree and earning a median household income of $90,000. The racial profile has inched to 75 percent white, a 5 percent increase in white residents than 60 years ago. Forty-nine percent of residents are between the ages of 18 and 34, while 20 percent are 55 and older.

In 2020 the neighborhood was included in the Great Places 2020 initiative. The initiative calls for city investments focusing on defined areas. Specifically, monies will be allocated to the façade improvement of existing businesses around Tarkington Park, a retail feasibility study, and a brownfield cleanup all at the corner of 38th and Meridian Street in the southeast corner of Butler-Tarkington.