Built by the same individuals who put together legendary Fenway Park, the Indians played their first game in the 14,500-seat stadium before a disappointingly small crowd of 5,942 on September 5, 1931. Perry named the $350,000 park Perry Stadium in honor of his brother and previous team owner James Perry who died in a plane crash in 1929. Famously, Perry Stadium’s English Ivy along its walls inspired P. K. Wrigley to have the classic Wrigley Ivy planted at quintessential ballpark Wrigley Field, home of the Chicago Cubs.

After a string of unsuccessful seasons in the 1930s, Perry sold the Indians to Frank E. Mckinney Sr. president of the Fidelity Trust Company, and Owen J. Bush, Indianapolis native as well as former major leaguer and Indians manager. The sale did not include Perry Stadium, which was to be leased to the new owners. McKinney and Bush promised a complete overhaul of baseball operations, and part of their plan was to rename Perry Stadium. One of Bush’s first moves as club president was to conduct a vote among the fans to determine a new name, and, in 1942, the Indians played their home opener at the rechristened Victory Field, a popular choice for the World War II era.

On June 1, 1967, the city of Indianapolis bought the location from the estate of Norman Perry. Victory Field was officially renamed Owen J. Bush Stadium, in honor of the Indians’ former star and long-time club president, during a pre-game ceremony on August 30, 1967.

Bush Stadium hosted numerous minor league playoff and championship games during its years as the Indians’ home. In addition, it served as the site of the Pan American Games baseball tournament in 1987. And in 1988, Eight Men Out, a movie about the infamous “Black Sox” scandal of 1920, was filmed at Bush Stadium.

Throughout the mid-20th century, Bush Stadium also hosted a long list of famous Negro League teams, such as the Indianapolis ABCs and the Indianapolis Clowns. Future Hall of Fame member Hank Aaron was an outfielder for the Clowns for three months during their 1952 Negro American League championship run.

In 1992, Major League Baseball inspected Bush Stadium and found that it did not meet the Minor League Baseball facility standards implemented in 1991. In July 1993, the president of the National Association, Minor League Baseball’s governing body, announced Major League Baseball’s intention to move the Indians unless the city made a commitment to upgrade the facilities. Since Bush Stadium’s necessary renovations were estimated at $12-14 million, the Indians began negotiating with the Capital Improvement Board in 1993 for the construction of a new stadium. These negotiations led to an announcement in late spring 1994 of plans for a new downtown stadium to be built just west of the Hoosier Dome on land made available by White River State Park. This new site, also named Victory Field, has served as the home site for the Indianapolis Indians since July 1996. 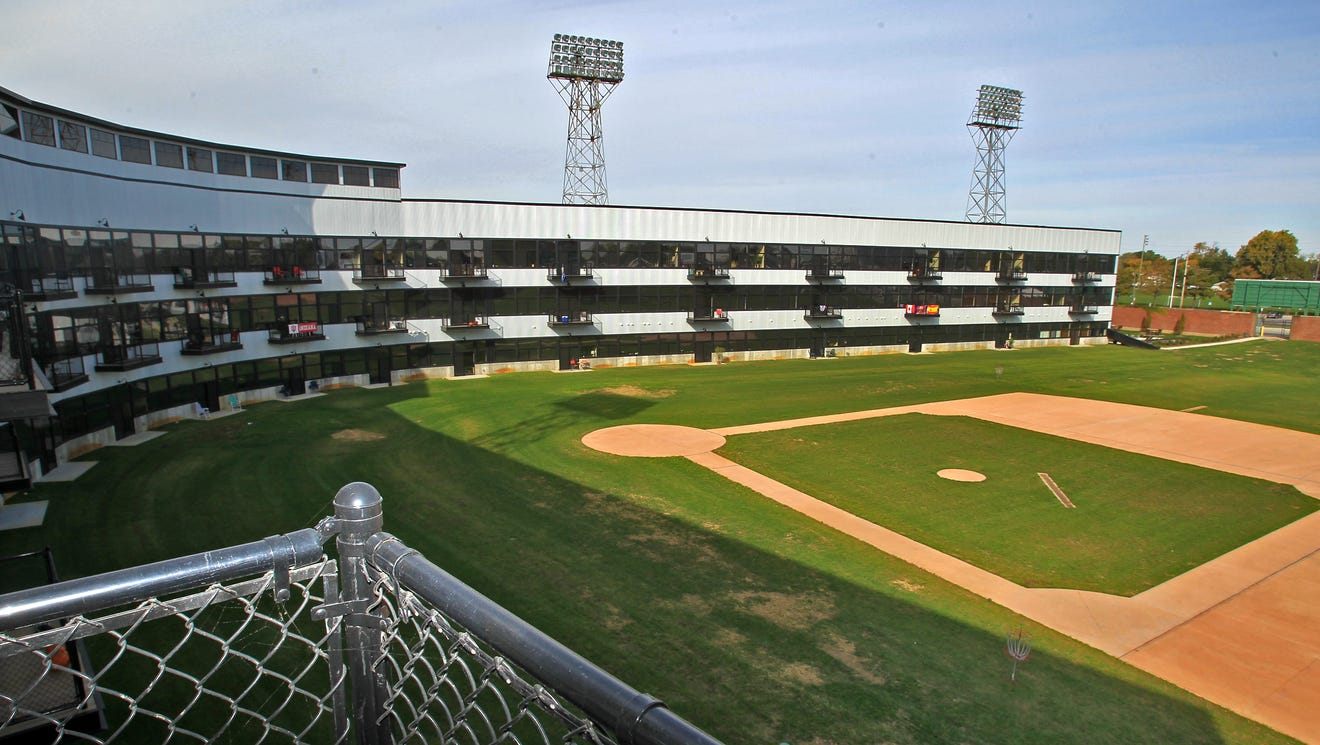 The baseball field seen from the outside deck of a second story two-bedroom apartment at Stadium Lofts at the former Bush Stadium, 2013
Credit: Kelly Wilkinson, IndyStar
View Source

In 1997, Tony George, president of the Indianapolis Motor Speedway, leased Bush Stadium and converted it for dirt track midget racing. He abandoned the project after two years. The stadium was used as a storage site until it was renovated for reuse as loft apartments. The developers incorporated much of the original features, including the owner’s suite and the ticket booth, and preserved much of the facade. The field’s lights, which were used for night games, also were retained. The renovation cost $13 million, and the city contributed $5 million to the project. Called Stadium Lofts, the complex opened in 2013 and contained 138 loft apartments. The project contributed to revitalization efforts in the Riverside neighborhood, which is part of the United Northwest Area.

Bush Stadium The stadium was located on the near west side of Indianapolis.

The United Northwest Area (UNWA) is located in what ...Read More »

A charter member of the American Association (AA) since ...Read More »

In 1899, a meeting in Indianapolis of high school principals ...Read More »