Buddhism has had a visible presence in Indianapolis since at least the 1980s, with the number of temples and meditation centers increasing significantly after the late 1990s. As a result of this proliferation, Indianapolis Buddhism is diverse. The city plays host both to temples founded by Buddhist-born Asian immigrants as well as meditation centers primarily serving non-Asian practitioners who adopted Buddhism later in life.

Buddhism emerged around the 5th century, BCE, along the border separating contemporary India and Nepal. According to tradition, Buddhism was founded when a young prince, Siddhartha Gautama, renounced the pleasures of his throne and joined with local wandering ascetics in pursuit of enlightenment. Eventually, Siddhartha broke off on his own, achieved enlightenment, and became the Buddha (i.e., the “Enlightened One”).

The “Four Noble Truths” provide a useful summary of what the Buddha discovered and taught. These truths are 1) that life is suffering, 2) that we suffer because all things, relationships, and states of mind (even good ones) are impermanent, and yet we cling desperately to them as if they were not, 3) that the solution to this problem is to let go, to cease clinging, and thereby achieve nirvana, and 4) that the way to achieve this is by following the “noble eightfold path,” which involves cultivating wisdom, compassion, and contemplative ability.

Schisms in the Buddhist tradition led to the formation of two distinct forms: Theravada (the “Tradition of the Elders,” i.e., the oldest surviving form) and Mahayana (the “Great Vehicle”), which developed after the first century, BCE. Though it emerged first in India, Mahayana 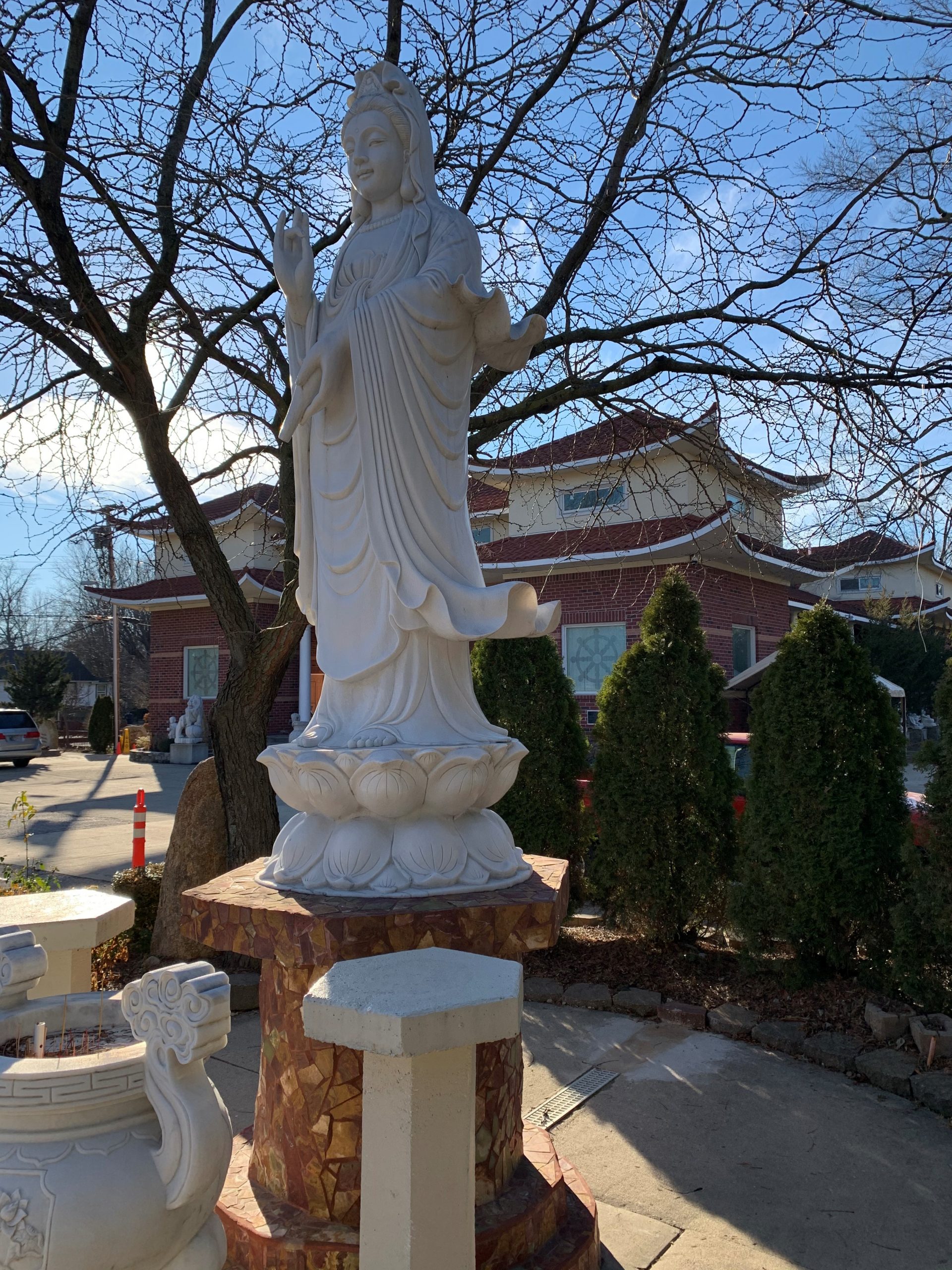 A statue of the bodhisattva outside of Chùa An Lḁc, 2020
Credit: Chad Bauman
View Source

Buddhism came to predominate in East Asia, while Theravada Buddhism came to predominate in South and Southeast Asia (except for Vietnam). Tibetan Buddhism, generally considered a form of Mahayana, is distinct from both traditions in significant ways. Simplifying somewhat, the Theravada tradition tends to stress self-reliance and the cultivation of spiritual wisdom and enlightenment, while the Mahayana tradition emphasizes the development of compassion and encourages the devoted to seek spiritual aid and support from myriad enlightened beings (Buddhas and bodhisattvas) who populate the cosmos in their fully realized spiritual states while functioning and being honored in many ways like Gods or demi-Gods.

The oldest surviving Buddhist institution in Indianapolis is Chùa An Lḁc, or the An Lḁc temple, at 5249 30th Street. The temple was established in two adjacent homes purchased in 1986 by a group of Vietnamese Americans, with the goal of having a space to practice their Pure Land form of Mahayana Buddhism. The temple functioned as both a temple and a cultural center and was led entirely by laypeople until 2002 when a community of nuns moved into one of the houses and established a nunnery. The nuns provide day-to-day guidance and lead weekend services for the An Lḁc community, which constructed a large, Vietnamese-style Buddha hall in 2007. With striking pagodas and beautiful gardens but tucked away unassumingly in a relatively isolated and quiet residential neighborhood, the hall is one of Indianapolis’s most overlooked architectural points of interest. Sunday services at An Lḁc include chanting, meditation, and dharma talks, and end with a communal vegetarian meal.

Among continuously operating, surviving Buddhist institutions in Indianapolis, the next several to be established cater primarily to middle-class, non-Asian practitioners. Unlike among Asian immigrants, for whom Buddhism tends to be embedded in networks of broader and often non-or pre-Buddhist cultural traditions, festivals, life-cycle rituals, educational practices, and religious beliefs, Western converts to Buddhism generally conceive of it as a practice (not a religion), a practice disconnected from broader Asian cultural traditions and intensely focused on physical, mental, and spiritual improvement through chanting and/or meditation.

The Indianapolis Zen Center (IZC) follows the Korean Kwan Um school of Buddhism established in the West by Zen Master Seung. While far more complex in Asia, Zen Buddhism among non-Asian immigrants in the West tends to focus on the spiritual potential of meditation for all practitioners (not just meditation specialists). Meeting in a renovated home at 3703 N Washington Boulevard (which also houses resident leaders), the IZC was established in 1991 and offers weekly practice sessions and periodic meditation retreats. At the weekly meetings, which usually draw between 5 and 20 people, practitioners chant Buddhist scriptures in Korean, Sanskrit, and English; engage in meditation seated on the floor; and linger afterward for short dharma talks and refreshments.

In 1998, three Indianapolis residents inspired by a Vermont retreat hosted by the internationally famous Vietnamese Zen monk, Thich Nhat Hanh, established another Zen meditation center, Friends of Awakening, in a private home at 4370 Cooper Road. Less formal than the Indianapolis Zen Center and following no specific formal Buddhist lineage, around 20 regular practitioners gather weekly at Friends of Awakening to share food and fellowship, discuss the dharma, and meditate both seated indoors and while walking contemplatively around the property’s beautiful gardens.

In that same year (1998), Tom Mitchell, an Indiana University professor, established the first of Indianapolis’s surviving Tibetan Buddhist meditation centers, the Dromtonpa Kadampa Meditation Center, which later became known as the Kadampa Meditation Center, or KMC. Indy’s KMC associates with the New Kadampa Tradition, which was brought to the West by the world-famous Buddhist lama (or teacher), Venerable Geshe Kelsang Gyatso Rinpoche. Unlike the sparsely decorated, brown-grey aesthetic of IZC, KMC services, now at 6018 N. Keystone Avenue, take place in a room decorated with the riotous colors of Tibetan Buddhist art, where resident teachers lead practitioners through dharma teachings and meditation. 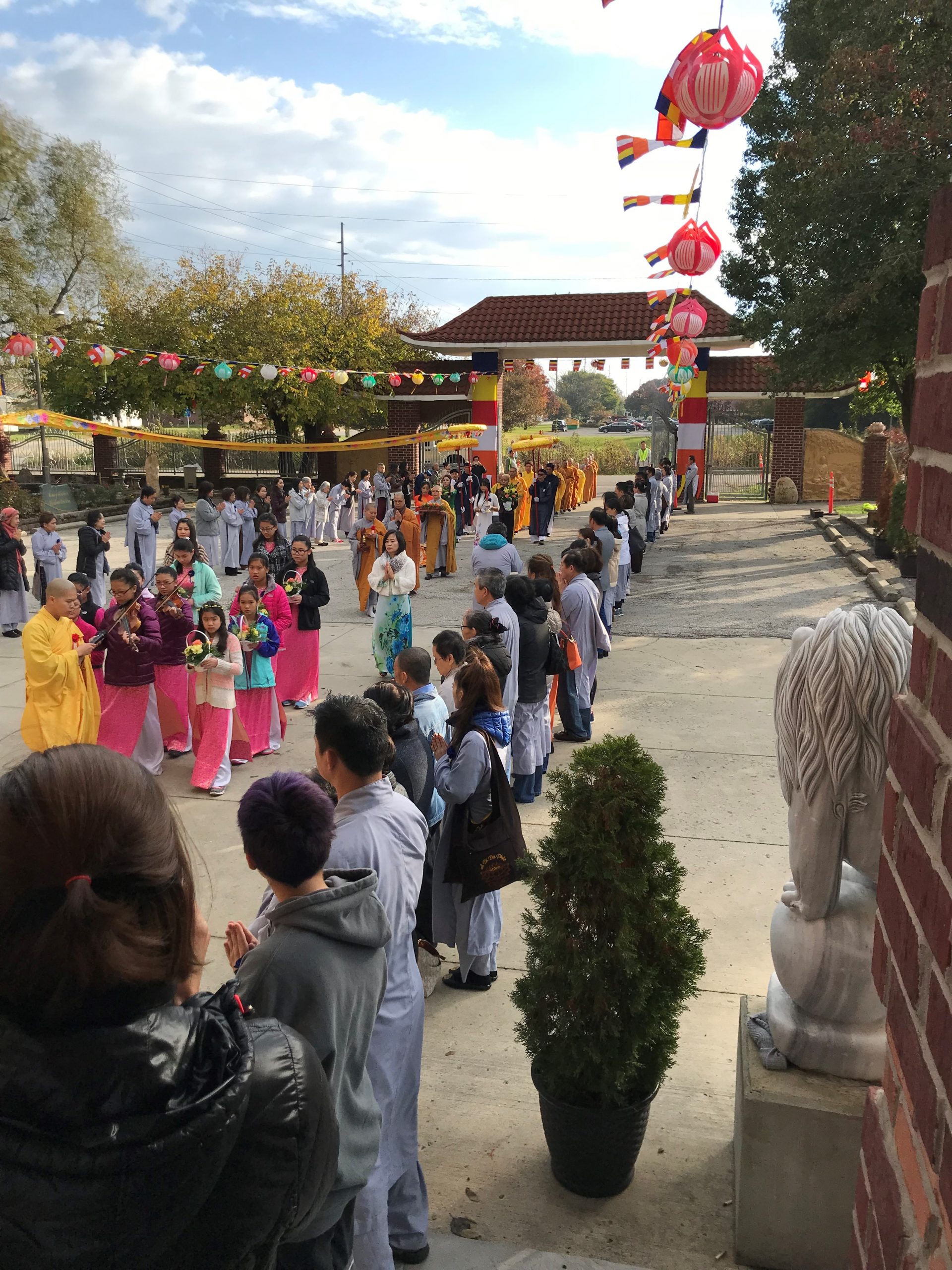 Established in 2003, the Indiana Buddhist Center (IBC) provides teachings and meditation in another Tibetan Buddhist lineage, in this case, the Dalai Lama’s Gelukpa lineage. The Center’s current spiritual director and residential teacher, Geshe Lharampha Jinpa Sonam, holds degrees from the Drepung Gomang Monastery in South India (one of the monasteries that relocated from Tibet to India after the Chinese invasion of Tibet in 1959). In 2007, IBC purchased the property at 9260 E. 10th Street, where Geshe-la (as Buddhist students often call their teachers) now resides and conducts services.

Yet another Tibetan Buddhist institution in Indianapolis, the Dagom Geden Kunkyob Ling Buddhist Monastery, is also associated with the Gelukpa tradition. The Monastery’s resident teacher, Venerable Lobzang Dorje, who provided much of the financial support necessary to found the Indianapolis monastery, took refuge and received training under Kyabje Dagom Rinpoche, a prominent Buddhist teacher, graduate of Drepung Gomang Monastery like IBC’s Geshe, and founder of the famous Dagom Ladang monastery in Nepal. Venerable Lobzang Dorje, Indianapolis’s only prominent African American Buddhist teacher, is a retired IU-Bloomington criminal justice professor and author of several books on race and sexuality in the context of urban crime. His vision for the Monastery, which is in a renovated home at 2123 N Pennsylvania Street, includes providing the dharma as a resource to minority communities.

More recently, Asian immigrant communities have founded new Buddhist institutions in the city. Migrants from Myanmar, for example, established both the Mon Buddhist Vihara of Indianapolis (3838 W 69th Street) and the Uttamavihara Monastery (5896 South East St). Both temples follow Theravada forms of Buddhism. As implied by its name, the Mon Buddhist Vihara serves a constituency primarily comprised of ethnic Mon immigrants (under the direction of a resident monk, Venerable Candima), while ethnic Rakhine immigrants comprise the Uttamavihara Monastery’s primary audience.

This list of institutions above is intended to be representative, not exhaustive. Other Buddhist institutions or associations established by immigrant communities that remain informal enough to pass unnoticed may exist or be formed. Moreover, other Buddhist institutions have been established in or just outside of Indianapolis: The Wat Indiana Buddha Vanaram (8100 Sargent Road) and SGI-USA Indiana (804 N Delaware Street). SGI-USA Indiana is part of the popular Soka Gakkai International movement, a form of Japanese Nichiren Buddhism that emphasizes chanting the Daimoku (a particular mantra) and promotes the belief that chanting can reveal one’s enlightenment and, by effecting internal changes, alter the external world and manifest desired material and spiritual rewards.

As a religion that predominates in countries across Asia, Buddhism is naturally diverse. In combination with Western forms of the religious tradition, it becomes even more so, and Indianapolis reflects much of that diversity in a concentrated form.

An Lac Temple serves as a spiritual home for Vietnamese in Indianapolis.