Bowling is a popular sport and recreational activity that evolved from European ninepins and skittles. Often associated with taverns and gambling during the early 19th century, bowling gradually became a respectable family pastime and debuted in Indianapolis in the 1880s with the opening of several establishments. Andrew Hermany installed two alleys in a shed behind his tavern at West and Washington streets, and the German Lyra bowling club opened a ninepin alley in Turner Hall but later switched to the more popular tenpin version. 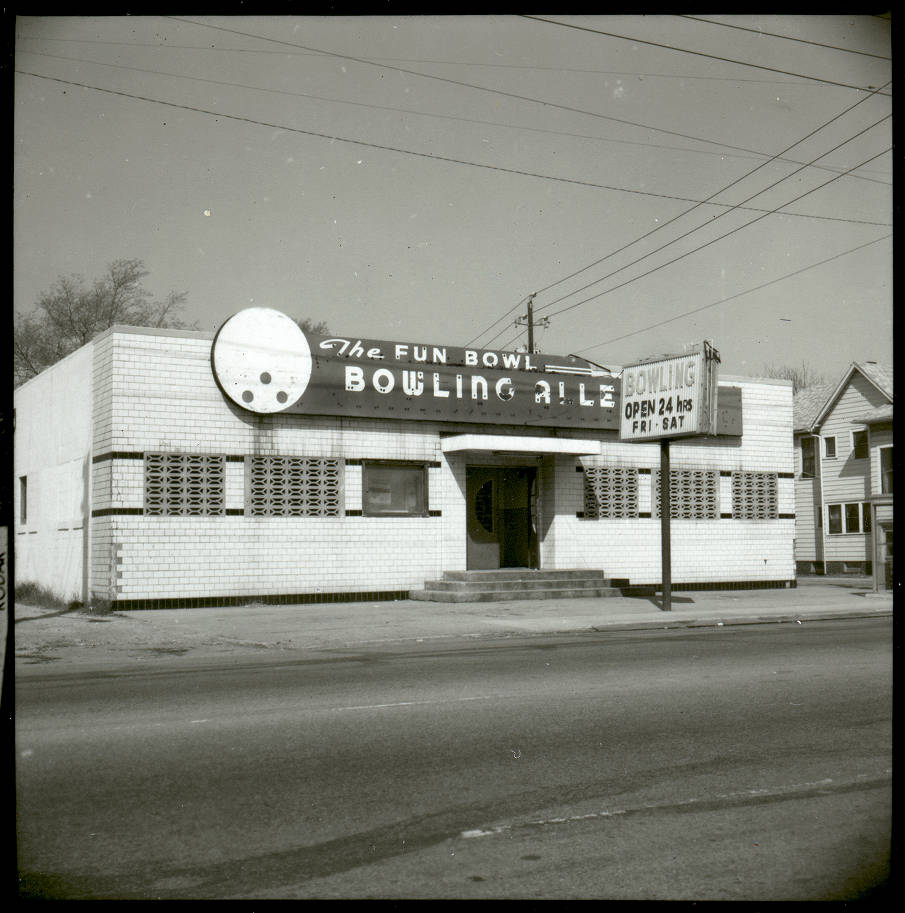 German citizens also built four alleys in Das Deutsche Haus (later the Athenaeum) in the 1890s. The sport quickly gained a local following, resulting in the American Bowling Congress’s (ABC, organized 1895 as a sanctioning body) third-ever tournament at Tomlinson Hall in 1903. The competition attracted 78 five-man teams over seven days and offered a prize purse worth $4,137, or about $130,000 in 2020. Pins were set by hand on 10 specially constructed alleys (known today as lanes) on the hall’s second floor. Bowling’s growing popularity led local aficionados to establish the Indianapolis Men’s Bowling Association in 1906.

By the time the ABC tournament returned to Indianapolis in 1936, bowling had become so popular that a larger facility had to be secured. Tournament organizers installed 32 lanes in the Indiana State Fairgrounds Coliseum to accommodate 2,853 teams from across the nation that competed over 37 days for prizes totaling $108,928. There were two Indianapolis winners: Falls City Hi-Bru in the team event with a 3,089 three-game total, and John Murphy in all-events with a nine-game score of 2,006. Indianapolis hosted its third ABC tournament in 1974 at the Indiana Convention Center, where 40 lanes with fully automatic pin spotters were set up. The tournament ran 79 days; 6,138 teams vied for shares of a prize purse worth $793,055. 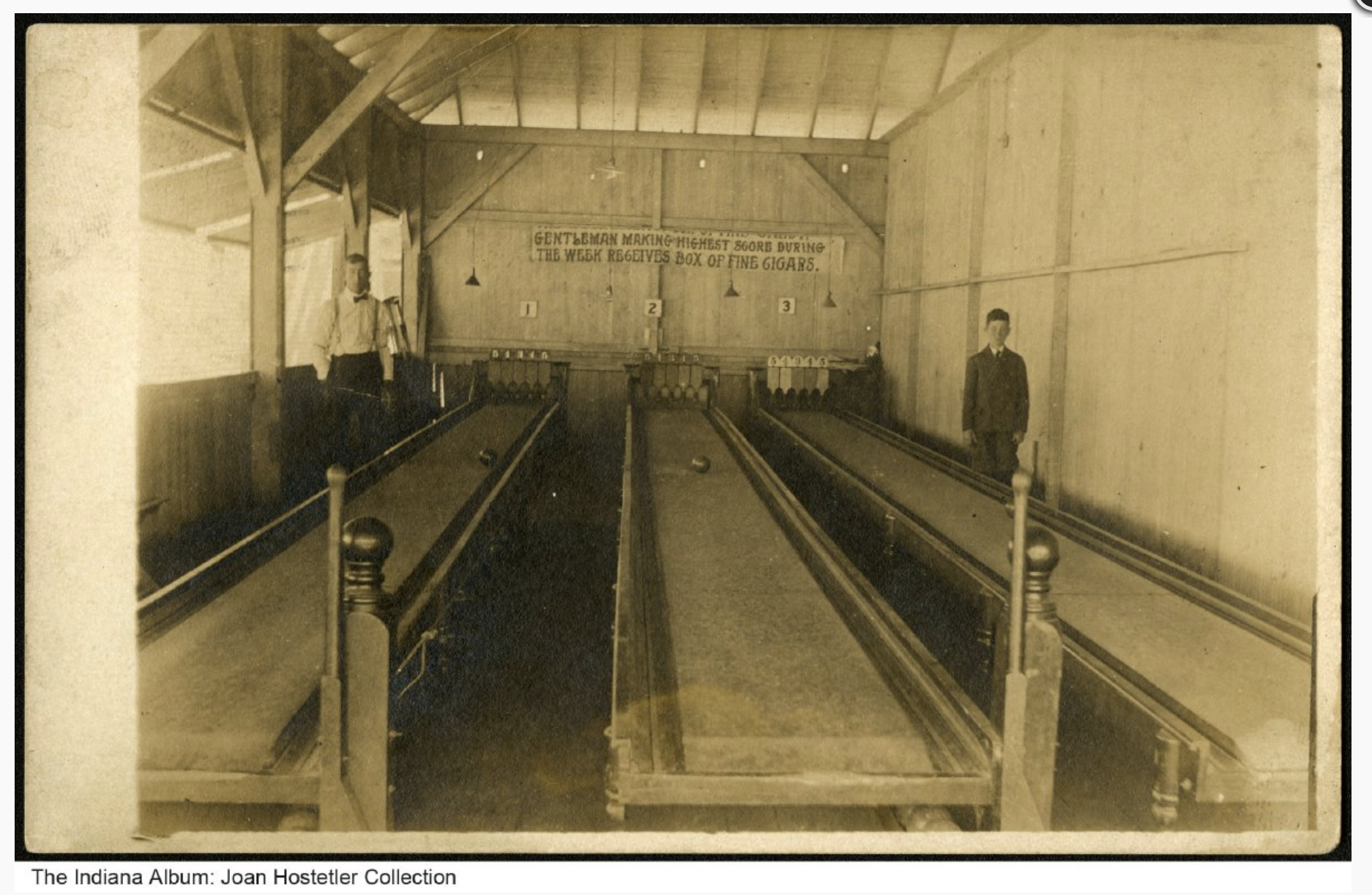 Following the creation of the Women’s International Bowling Congress (WIBC) in 1916 as an official sanctioning body, local women formed their own governing body—the Indianapolis Women’s Bowling Association (December 1919)—which sponsored its first tournament that year.

As women demonstrated growing support for bowling, the WIBC selected Indianapolis to host its tournaments three times. The 10-day 1924 competition saw 126 teams bowl at the 12-lane Central Lanes on West Ohio Street. Alice Feeney of Indianapolis won the singles title with a 593 score. The 1934 tournament, held at Pritchett’s Recreation on East Maryland Street, drew 253 teams over 18 days to compete for $8,697 in prize money. Meadows Bowl hosted the 1975 tournament, which attracted 5,720 teams over 50 days to vie for $413,949 in prizes.

Over the years, bowling establishments have come and gone. The heyday for bowling, according to the Greater Indianapolis Bowling Association, was the 1950s following the introduction of automatic pin spotters and the founding of the Indianapolis Junior Bowling Association (1958) to attract younger bowlers to the sport. Sports Bowl (opened in 1941 and the oldest in the city) at 3900 South East Street became Indianapolis’ first center to install the new pin-setting machinery. By 1955, there were 32 bowling establishments citywide with 412 total lanes; in 1964, there were 35 centers with 738 lanes; and in 1977, 29 with 916 lanes.

As the population spread to the suburbs, bowling centers vanished from the downtown area; in 1993, there were 17 centers with 672 lanes scattered around the city. Indianapolis reportedly was the only city in the nation with three 80-lane bowling centers near the turn of the 21st century: Expo Bowl, 5261 Elmwood Drive; Western Bowl, 6441 West Washington Street; and Woodland Bowl, 3421 East 96th Street.

By the early 21st century, all three centers had come under the ownership of Royal Pin Entertainment. Participation in the sport was decreasing, and the decline in bowling league membership translated into drops in revenue. In 2014, Royal Pin upgraded its facilities and refocused its business to attract group events, including parties, fundraisers, and corporate retreats. This strategy succeeded. By 2019 revenues had doubled. Woodland Bowl on the northside alone attracted 60 to 120 events per month, while Expo Bowl, on the southeast side, and Western Bowl on the westside, each attracted 12 to 24 events each month. Before the 2020-21 COVID-19 pandemic, the sport claimed nearly 100,000 devotees locally. The Action and Atomic Duckpin Bowling centers in Fountain Square were also popular. A new duckpin bowling alley opened in 2021 as part of the redevelopment of the Bottleworks District.

Three Indianapolis bowlers have gained national prominence in the sport. richard a. (dick) weber (1929-2005) learned to bowl at Sport Bowl and worked as a pinsetter at Carl Hindel’s Indiana Alleys, 128 West Washington Street. Serving as Weber’s mentor, Hindel advised him in 1955 to accept a job with the St. Louis-based Budweiser professional team. On March 12, 1958, Weber bowled 775 when his team set a world-record three-game total score of 3,858, a record which still stands.

That same year, Weber became one of 33 charter members of the Professional Bowlers Association (PBA). During the 1965 Houston Open, Weber became the first pro to roll three perfect games in a tournament. He also was the first player to win PBA titles in five decades when he and Justin Hromek captured the PBA Touring Pro-Senior Doubles title in 1992, Weber’s 2nd title of his career (26 on the regular tour, 6 on the seniors’ circuit). He would win 36 titles overall during his playing career. Weber is a member of the ABC, PBA, Missouri, St. Louis, Indiana, and Indianapolis bowling halls of fame.

Pat Dryer (1929-2000) began her bowling career at age 12. She was the first Bowling Proprietors Association of America (BPAA) National Doubles champion with Marge Hitt in 1950 and had the highest average (200) in the nation for women that year. Dryer was a member of the Hickman Oldsmobile Whirlaway team that won a WIBC title in 1951. A member of the first women’s professional tour, Dryer was inducted into the United States Bowling Congress (USBC) Hall of Fame in 1978. She also is a member of the Indiana and Indianapolis bowling halls of fame.

Mike Aulby (b. 1960) learned to bowl at Beech Grove Bowl and became a teenage phenomenon. At age 19, the lefthander joined the PBA Tour, and after winning his first title, the PBA National in June 1979, was named PBA Rookie of the Year.

In 1985. Aulby became the first PBA player to win more than $200,000 ($201,500) in one year and was named PBA Player of the Year. He also set a one-year earnings record of $298,237 in 1989 when he was named PBA Player of the Year and Bowler of the Year. With a victory at Green Bay, Wisconsin, in 1992, Aulby became only the seventh player to win 20 PBA titles. He won 29 titles during his professional career. In 1996, Aulby received the Excellence in Sports Performance Yearly Award (ESPY) for “best bowler and was elected into the PBA Hall of Fame. He was inducted into the USBC Hall of Fame in 2001. The PBA ranked him 6th in its 2008 list of “50 Greatest Players of the last 50 Years.”