The earliest appearance of the bicycle in Indianapolis was a demonstration on the Circle of the high-wheeled “ordinary” in 1869. Within a few years hundreds of men were riding the contraptions around the city, but the invention of the safety bicycle with two equal-sized wheels in the 1880s, immediately followed by the adoption of pneumatic tires, initiated a national mania embraced by men and women alike. A special dropped frame was soon designed that allowed modest ladies to ride in a skirt, but many women of the 1890s adopted shorter, divided skirts for cycling freedom.

In 1889 Harry T. Hearsey introduced the first safety bicycle to Indianapolis, which took to it immediately. Soon so many bicycles clogged the streets that in 1893 the City Council passed an ordinance requiring a $1 license fee. In the 1890s several popular bicycle models were manufactured locally, such as the Waverly and the Outing.

Men who later became pioneers in the automobile field got a rolling start in bicycles, among them Carl G. Fisher, James A. Allison, and Arthur c. newby, all founders of the Indianapolis Motor Speedway but also all members of the ZigZag Cycle Club that began in Indianapolis in 1890. Both men’s and women’s clubs proliferated; their activities included “century rides” in which cyclists would make a round trip of at least 100 miles a day. Bloomington was a popular destination for Indianapolis riders.

Bicycle racing was immensely popular in the 1890s, with most major events held at a track in Broad Ripple until the construction of the Newby Oval near 30th and Central in 1898. The Newby Oval was large enough and sufficiently state-of-the-art to host national championship events sponsored by the League of American Wheelmen.

Designed by Indianapolis architect Herbert Foltz, the facility could and often did accommodate 20,000 fans. Major Taylor, the city’s renowned bicycle champion, raced there for an often unappreciative hometown crowd from the Oval’s opening through 1900. The Major Taylor Velodrome, located immediately north of Marian University, is named for him. A rare architectural reminder of the bicycle craze of the 1890s is the bicycle ramp in the stairs of the Athenaeum leading down to the Rathskeller, designed by Bernard Vonnegut of Vonnegut and Bohn architects.

With the coming of the automobile (and with it, the motorcycle), the heyday of the bicycle was over. The depression of the 1930s saw a revival of popular interest with the staging of six-day bicycle races, often held in the Butler Fieldhouse (Hinkle Fieldhouse). Because of gasoline and tire rationing, World War II stimulated a broad-based surge of bicycle commuters, who cried out for their own lanes and safety zones as they wove precariously through traffic on Indianapolis streets.

Until the 1990s, their cry remained largely ignored in the city, apart from recreational bicycle paths within several parks and parkways throughout Indianapolis. In 1993 the first segment of the Monon Trail opened, which follows the right-of-way of the former railroad from 10th Street northeast of downtown to and through Hamilton County. Completed in 1999, it connected the populous northside to the center of the city, and bicycle commuters began to use it extensively. This prompted efforts to create bike lanes along busy thoroughfares connecting residential areas to downtown. Concurrently the city designated six cultural districts, all but Broad Ripple in the downtown area. This development led to the eight-mile Cultural Trail, begun in 2007 as a completely urban trail. Completed six years later, it officially became the Indianapolis Cultural Trail, Inc. The organization also sponsors Indiana Pacers Bikeshare, a short-term bicycle rental program, offering over 500 specially designed bright yellow bikes at 50 stations mostly in the central city.

In response to demand from cyclists, in 2012 the city created the first Bicycle Master Plan to develop infrastructure and policy. Subsequent efforts continue to revamp streets to provide dedicated and separated lanes throughout the city, as well as more recreational trails. At least half a dozen organizations existed in 2020 to serve their riders, providing safety tips, group rides, guidelines, and activities for kids. 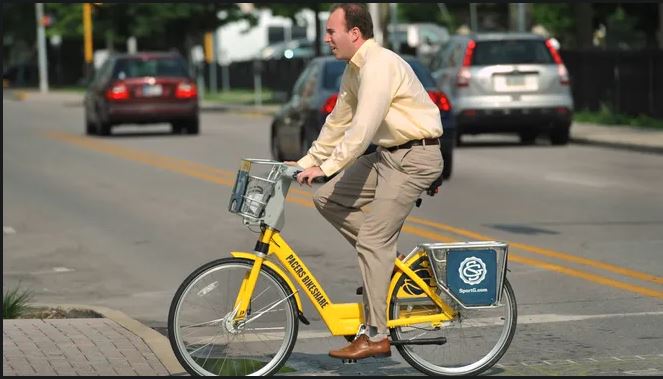