Avondale Meadows is an eastside neighborhood, formerly known as the Meadows, bounded by Fall Creek, Sherman Drive, and 38th and 46th streets. In January 1947, Indianapolis developers began to develop a 153-acre neighborhood on Indianapolis’ northeast side. Over more than 20 years, land purchased from the William Henry Roberts family, founder of Roberts Dairy was transformed into adjacent developments called the Meadows.

Post-World War II demand for housing spurred the growth of the Meadows. It soon became a destination for shopping, the arts, and quality housing, and the largest multi-use community of its kind in Indiana to date. By the fall of 1947, the 620 units in 37-two-story buildings making up Meadowbrook Apartments opened, followed by the Meadows Apartments in 1953 with 616 apartments in 56 two-story buildings.

For 12 years, the Meadows was home to one of the highest-profile dinner theatres in the Midwest. In 1954 the Avondale Playhouse, founded by Allen Whitehill Clowes, later known as the Avondale Theatre in the Meadows opened featuring summer stock theatre that attracted Hollywood personalities like Vivian Vance, Cesar Romero, and Dorothy Lamour. These headliners acted alongside a mostly local cast of actors and actresses. Housed inside a candy-striped tent in the Meadows Shopping Center parking lot, the theatre-in-the-round accommodated an audience of 1,200 people.

By the 1960s, the Meadows area was a highly desirable place to live, work, and play in Indianapolis. To accommodate the growing number of professionals living in the community, the Meadows Executive Plaza opened five office buildings in 1965. Doctors, lawyers, business people, and civic leaders called the area home. In 1975, the Meadows Bowl hosted the WIBC World Championship bowling tournament which attracted 5,720 teams over 50 days to vie for $413,949 in prize money. Indiana Pacers All-Star player Bob Netolicky owned Neto’s in the Meadows, a trendy nightclub. 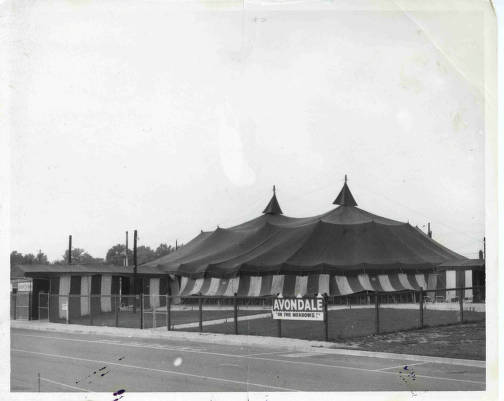 Yet, by the 1980s, the one-time suburban destination became a textbook case of urban blight. Though the Meadows played a large role in integrating the city, census tract data from 1950 to 1980 showed a significant change in the racial character of the area as many white families fled the Meadows area for the counties adjacent to Marion County. Years of neglect altered the landscape as the area fell victim to crime and decay, earning a reputation as one of the most dangerous neighborhoods in the Midwest.

Members of the Meadows-Fall Creek Civic League (MFCCL) tried to bring city officials’ attention to their neighborhood’s deterioration. A task force was formed with an initial focus to either raze or revitalize the Meadows Shopping Center. Plans also included bringing healthcare and recreational facilities back to the area. The MFCCL met resistance from the shopping center owners and inattention and inaction from city officials.

After persistent urging, the MFCCL made progress in 1989-1990 when the Health And Hospital Corporation purchased a vacant building for offices and clinics, and the area was designated as an urban enterprise zone. Pentecostal Assemblies of the World Church, a property owner, announced plans to build a new shopping complex with a Cub Foods anchor store. Cub Foods did open its doors in 1995 only to close two years later. In 2004, parents and community leaders in The Meadows acquired the former Cub Foods location to launch a charter school for area students known as the Tindley Accelerated School.

In 2008, the Meadows Community Foundation formed to restore the area. A coalition among residents, businesses, community leaders, foundations, and governments promoted reinvestment in education and addressed the existence of a food desert. In 2009, Strategic Capital Partners announced its plan to invest $150 million over an eight-year period to improve the area. Working in three phases the plan would bring affordable housing, retail stores, and grocery stores to the area.

In 2011, the revitalization efforts of the neighborhood received national attention during a visit from philanthropist Warren Buffet, cofounder of the Purpose Built Communities project, a nonprofit organization dedicated to the revitalization of blighted areas nationwide. The organization’s commitment to a $5 million interest-free loan has been instrumental in the rebirth of the Avondale Meadows.

With Phase 1 construction focused on affordable housing, Phase 2 aimed at providing healthcare services for neighborhood residents. The United Northeast Community Development Corporation partnered with the Meadows Community Foundation to fulfill this need as well as to provide recreational space for neighborhood children. In 2014, the $18.8 million Avondale Meadows Health and Wellness Center opened. It houses a YMCA, the HealthNet Northeast Health Clinic, and a daycare and early childhood development center. The neighborhood has benefited from the successes of the Challenge Foundation Academy and the $5 million tuition-free Avondale Meadows Middle School which opened in 2017.

The private-public investment in the area also has paid off with a grocery and other stores, new apartments, and a dental office. Once known as “the most dangerous part of Indianapolis,” the Avondale Meadows area also witnessed a large decrease in crime at the end of the 2010s, with 71 percent decline in homicides in the first eight months of 2019 compared to the same period in 2018.