Allison Transmission is a major producer of aircraft engines. James A. Allison, a founding partner of the Prest-O-Lite Company and the Indianapolis Motor Speedway, established the Allison Speedway Team Company, a machine shop, in 1913. It was renamed the Allison Engineering Company in 1917. The firm began supplying tools, jigs, fixtures, and gauges initially to the Nordyke And Marmon Company for use in the World War I Liberty engine. Allison received additional contracts for production models of superchargers, whippet tanks (British tanks), and high-speed tractors.

After the war, the Army awarded Allison a contract to redesign and retool 3,000 surplus Liberty engines to improve their reliability and life. This resulted in the development of a steel-shell bearing with lead-bronze lining, a remarkable product that revolutionized the aircraft engine industry throughout the world and became the most profitable product of the company. By 1927, Allison’s major products, in addition to its bearings, were airplane reduction gears and high-speed superchargers.

After the death of James Allison, General Motors purchased the company (1929) for $592,000. During the early 1930s, the company began experimental development on a revolutionary idea, a 1,000-horsepower reciprocating, liquid-cooled aircraft engine, which would have a slimmer shape than an air-cooled engine, for use in military aircraft. On April 23, 1937, the engine, designated as the V-1710, passed all the tests required by the Army Air Corps to become the first aircraft engine in the United States qualifying at 1,000 horsepower.

Early in 1939, the War Department awarded Allison a $15 million contract for 524 V-1710 liquid-cooled reciprocating engines. This engine was so successful that the Allison Company received additional contracts from the United States as well as from Britain and France during World War II. Near the end of the war, the company received a contract for the development and production of turboprop engines. Allison’s total production for the war effort was 70,000 engines, both reciprocating and jet, and 10 million bearings. At its peak in 1943, the plant employed some 23,000 persons working three shifts seven days a week.

The physical size of the company also grew from one machine shop to three modern factory buildings, giving the company a total floor space of 3,843, 690 square feet by 1943 as well as 17 specially designed test cells for testing the new jet engines. An additional plant was built in 1951, at which time the Aeroproducts Propeller Company of Dayton, Ohio, became consolidated with Allison.

In 1970, General Motors’ Michigan-based Detroit Diesel Engine Division was consolidated with Allison Operations, which became Detroit Diesel-Allison and combined the production and development of diesel engines and transmissions with gas turbine engines. General Motors believed this merger would give Allison additional stability. General Motors’ commitment to the increasingly strong diesel market, however, left Allison’s position weak and insecure in the business world. By the early 1990s, the machine shop that James Allison began had become two distinct General Motors divisions, Allison Gas Turbine Division and Allison Transmission Division. Both units faced an uncertain future as General Motors placed both divisions up for sale in 1991 in order to concentrate on the automotive business.

In November 1993, GM called off its sale of Allison Transmission to the German firm ZF Friedrichshafen AG following a suit by the U.S. Justice Department, which claimed that it would dampen competition. On December 1, 1993, Allison Gas Turbine became Allison Engine Company following a reported $310 million sale to senior Gas Turbine managers. The company, with annual sales of about $700 million, employed approximately 4,700 at the time of the sale, down from 6,000 in the late 1980s. 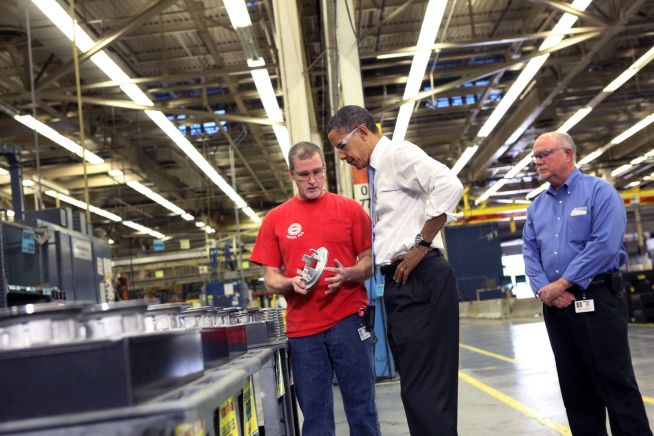 Meanwhile, the Allison Transmission Division remained with GM at the turn of the century. In 2007 Allison Transmission finally was sold to two private equity firms, The Carlyle Group and the Onex Corporation. While the sale meant leaving the GM system, Allison has nevertheless worked closely with GM in the years following the sale.

In addition, the early 21st century saw Allison Transmission (the name by which it became recognized following the sale) begin to expand beyond Indianapolis. For instance, the company opened a customization center in 2005 in Shanghai as well as a manufacturing plant in 2010 in Chennai, India.

Allison opened its Vehicle Environmental Test Center in 2020. When electric-vehicle testing capabilities were added to this facility in 2021, it became known as the Vehicle Electrification and Environmental Test Center. In March 2022, the company opened its $400 million Innovation Center. The center provides a home for about 300 Allison engineers, designers, and others who worked previously at other company sites. It features a 3D printer in-house and virtual-reality and mixed-reality technologies. These virtual- and mixed-reality technologies allow users to examine Allison components virtually, providing an alternative to the physical disassemblement of the actual component.

Allison Transmission is located on the westside in Speedway.