Episcopal Church of All Saints

The parish known as All Saints was established under the name Grace Church in September 1864. It was the third Episcopal parish in Indianapolis, after Christ Church, which was established in 1837, and the short-lived St Luke’s. Diocesan leaders cited overcrowding at Christ Church as a reason for establishing the new congregation in what was then the city’s northern neighborhood. 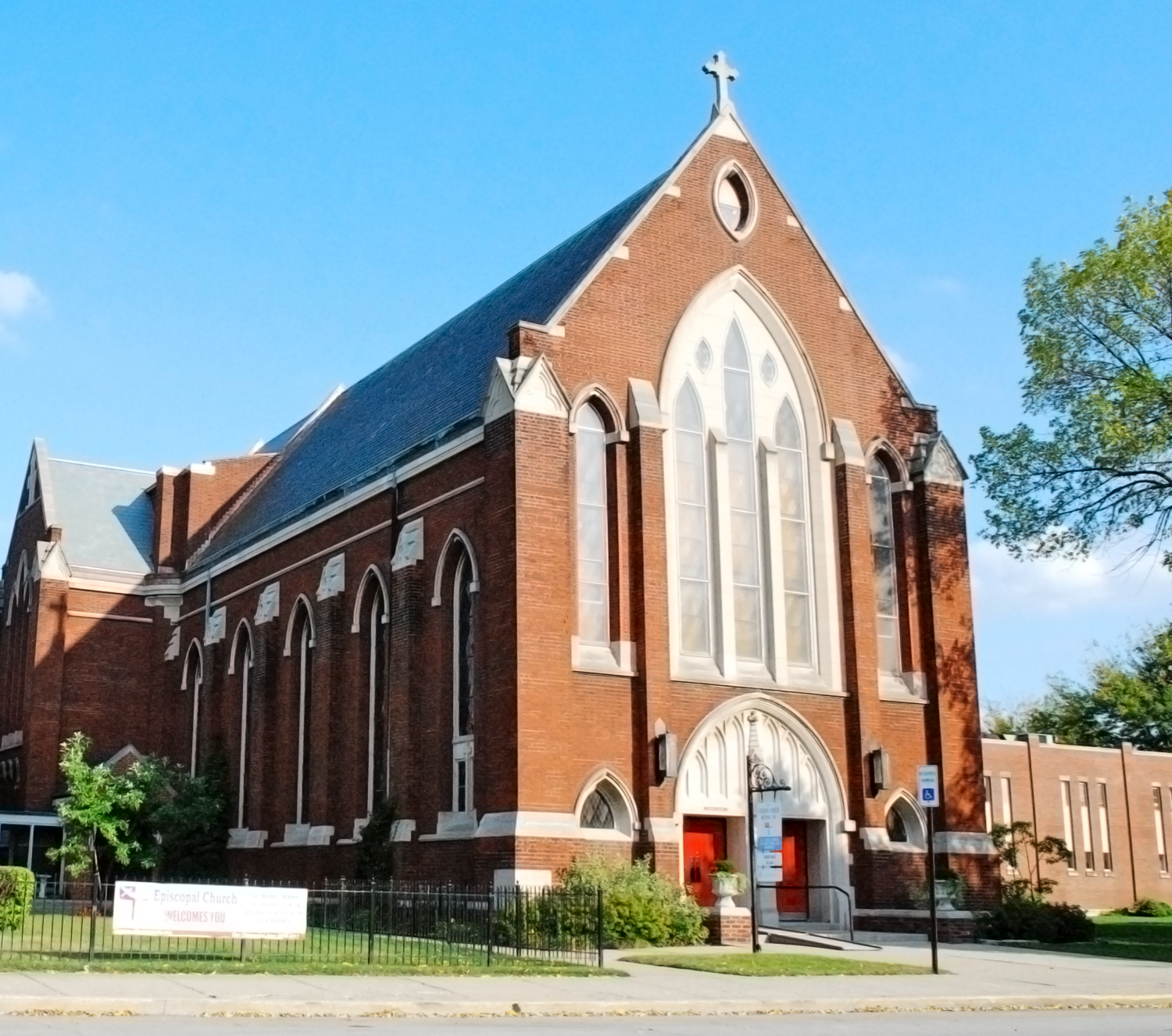 The first Grace Church was a white frame structure in the Carpenter Gothic Revival style, which is an eclectic architectural style that makes use of the most obvious elements of Gothic design, including pointed arches, turrets, and spires. It stood at the southeast corner of Pennsylvania and St. Joseph streets, accompanied by the bishop’s house. Bishop George Upfold consecrated this structure in July 1865. Reverend Martin Averill was called as the first clergy of the new parish. He served in this role until 1867.

Financial difficulties plagued the early decades of the parish. Indebtedness forced its closure from 1882 until 1884. During this time, the church was used as a gymnasium. After it reopened in 1891, Grace served as the diocesan pro-cathedral—temporarily assigned as the seat of the Episcopal bishop. Prior to this, St. Paul’s Episcopal Church, then located at the corner of New York and Illinois streets, had served as the pro-cathedral of the diocese from 1867 until 1891.

As Indianapolis grew, so too did Grace Church, and the frame church was moved to the current location at 1559 Central Avenue in 1889. Several other structures, including the now-razed Knickerbacker Hall, named for Bishop David Knickerbacker, and St. Mary’s Hall would eventually be built on the site.

The newly formed diocese planned construction of a grand cathedral and chose English architect Alfred Grindle, who also designed the Glossbrenner Mansion at 32nd and Meridian Streets as well as several buildings in Bloomington, to complete plans for the new church. Grindle served as choirmaster and bishop’s council member for several years.

Because of financial restrictions, the present building, constructed in the English Gothic Revival style, drawing from medieval English motifs, patterns, and design, did not meet expectations as a grand cathedral. Original plans called for a brick chancel and nave, but only the brick nave was completed. A lack of sufficient funds dictated that the chancel and apse be constructed instead as a temporary wooden structure. When the church was dedicated in November 1911, the name of the parish changed from Grace Pro-Cathedral to All Saints Cathedral.

In 1948, the diocese transferred pro-cathedral status to Christ Church on Monument Circle. Congregational numbers began to decline as parishioners moved away during white flight from inner-city neighborhoods. Diocesan and parish leaders held discussions about moving to another location, but they decided to stay and serve the neighborhood. During this period, members placed a placard proclaiming “All Are Welcome” above the western door.

By the 1960s, the temporary structure had become dilapidated. The diocese and parish chose EVANS WOOLLEN as architect for major renovations that were undertaken between 1963 and 1964. Woollen designed a striking brick Modernist apse that starkly contrasts with the Gothic Revival nave. In January 1977, All Saints was the site of the ordination of Reverend Jacqueline Means, the first regularly ordained woman in the worldwide Anglican Communion. A plaque inlaid in the church’s crossing marks the spot of her ordination.

For many years, All Saints left its doors open to let the homeless sleep in its pews, exemplifying the congregation’s openness and community awareness. Beginning in the late 1980s, All Saints began ministering to the LGBTQ+ and homeless communities, when the church started to provide emergency shelter to its homeless neighbors and burials to men dying of AIDS. These ministries led to the establishment of the DAYSPRING CENTER and the DAMIEN CENTER.

All Saints continues to hold regular services and the congregation remains active in ministering to the neighborhood with Alcohol Anonymous and Narcotics Anonymous meetings and outreach programs of all kinds.

All Saints Episcopal Church The church is located at 1553 Central Avenue in downtown Indianapolis.