There is little evidence that air pollution was ever considered a significant problem in Indianapolis from the late 1800s through World War II, although there were some organized efforts at smoke abatement. Indianapolis had a broad industrial base but never had the heavy industry found in other Midwestern cities. Also, a belching smokestack was a sign of prosperity and meant that people had jobs.

As early as 1898, Indianapolis passed an anti-smoke ordinance to improve air quality in the city. However, this initial law lacked penalties for violators and failed to provide a means of enforcement. In 1904, the city revised the ordinance and hired a smoke inspector, but these actions did little to reduce the pollution level. A 1912 map of soot deposits in the Mile Square indicated that the southeastern section of the city, near Union Station, accumulated 58 pounds of soot an acre in a 24-hour period.

Coal was a major source of energy until the mid-20th century. It was burned to produce steam and used for residential heating. During the winter months, the smell of burning coal hung over most of the city. There was considerable fallout of soot and ash, yet most people did not view it as a health hazard. Many homemakers instead identified the soot that fell on laundry as the primary problem involved.

Railroads, industry, and homeowners alike were responsible for the smoke that resulted when soft coal was burned in inefficient heating systems. The smoke was especially noxious in the downtown area during the winter months. A 1926 report ranked Indianapolis as the sixth-smokiest city in the United States, estimating that people in the downtown area inhaled more than a teaspoonful of soot every day. Concerned citizens formed the Indianapolis Smoke Abatement League three years later. The league pushed for tough smoke abatement laws and was critical of Citizens Gas & Coke Utility for “its failure to provide city residents with smokeless fuel at reasonable prices.”

Smoke pollution in the city peaked during the 1930s when the city burned over one million tons of coal annually and the resulting smoke blocked out a third of the city’s sunshine during winter months. More alarming was the 63 percent increase in the city’s pneumonia death rate from 1932 (370 deaths) to 1936 (604 deaths), which city health officials attributed directly to the smoke. The Indiana State Medical Association characterized the continued breathing of the city’s smoke-filled air as a “positive harm” to one’s health.

A smoke blackout in the city on November 10, 1937, created near-zero visibility. Another serious blackout two weeks later filled the hallways of Riley, Long, and Coleman hospitals with smoke, aggravating patient illnesses. Photographs in city newspapers show barely visible street corners obscured by a thick gray haze. A WPA-funded study of soot levels in Indianapolis reported that 1098.3 tons of soot fell in the city in January 1938, averaging 21 tons of soot per square mile. The city’s near southeast side continued to be most affected, with one neighborhood receiving 54.5 tons of soot per square mile in just one month.

Newspapers estimated that excessive smoke cost city residents $6.5 million annually (over $1 billion in 2020), including lost work time due to sickness, increased costs of inefficient heating, and extra expenditures for laundry, painting, and lighting. The thick smoke also created a shrinking tax base as people left the center city for the cleaner air of the suburbs.

Despite these figures, city administrators argued that smoke abatement measures were adequate if enforced. By 1940, city officials announced that smoke had been reduced by 25 percent during the previous year. Gradually, the city’s smoke problem improved as railroads began using diesel fuel, industries started burning oil, and individual homeowners switched to alternate heating sources. These gradual changes, coupled with the city’s tougher stance on smoke abatement, led to an improvement in air quality by the late 1940s. 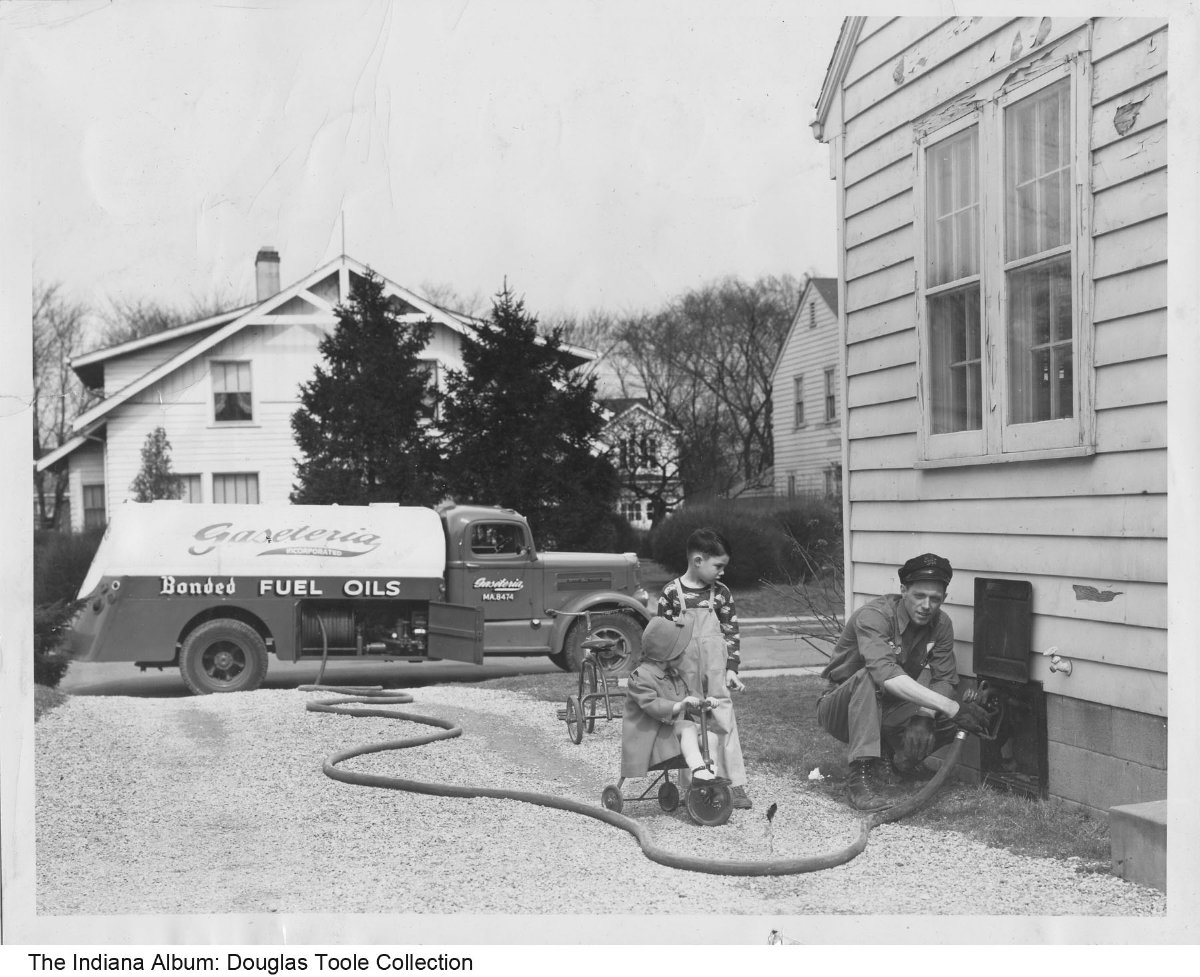 An alternate heating source, a worker from the Gaseteria Oil company is delivering fuel to a home through the old coal delivery shoot, ca. 1950
Credit: The Indiana Album: Douglas Toole Collection
View Source

After World War II, air pollution became a major issue in many urban areas. Industries cooperated more readily with the new smoke abatement laws than did individuals, who continued to account for many of the violations (as many as 700 annually, well into the 1950s). In 1952, the Indianapolis Times reported that smoke in the city had been reduced by 50 percent during the past three years. The city’s last major smoke blackout occurred on December 12, 1955.

Air pollution problems could not be approached state by state because air masses do not respect state boundaries. The federal Clean Air Act of 1970 (CAA), the first attempt to control air pollution nationally, set national standards for sulfur dioxide (SO2), carbon monoxide (CO), ozone (O3), total suspended particulate (TSP), and nitrogen oxides (NOx). In addition, an effort was to be made to control toxic air pollutants through the National Emission Standards of Hazardous Air Pollutants program.

Nearly all major Indiana industries, especially the steel and utility industries, opposed implementation of the CAA. Hoosiers also believed that cities should have control over their own affairs. Since the enabling legislation for the CAA permitted local air pollution agencies to have enforcement authority, the city established an Indianapolis Air Pollution Control agency in 1967. Governed by the Indianapolis Air Pollution Control Board, it has authority to enact regulations and take enforcement actions.

Indianapolis has violated the SO2, CO, lead (PB), and VOC (volatile organic compounds) standards at various times. The city has had many sources of SO2 since local utilities and large industries have burned high-sulfur coal. Indiana has had an abundance of cheap high-sulfur coal that was the fuel of choice until the 2010s.

Volatile organic compounds have been a continual problem because of the wide variety of VOCs used by local industry. Automobiles, industrial operations that use organic solvents in cleaning operations, and chemical and pharmaceutical manufacturing have all been sources of VOCs. VOC emissions are also related to the generation of ozone (O3), which has been a continuing problem in the city. Marion County was classified as an ozone nonattainment area in 1978. Carbon monoxide (CO) has been a problem in a limited area of downtown. Automobiles are the major source of CO. Changes in downtown traffic patterns—for example, making Washington Street one way—causes traffic to move more rapidly through the area, thus reducing harmful emissions. Until the mid-1990s, leaf burning also contributed to the problem and is believed to have resulted in violating the CO standard on at least one occasion.

With the passage of the Clean Air Act of 1990, city and state officials hoped that air quality would improve with its implementation. Odors continued to be a problem. However, there are no state or city regulations to control sources of odor even though many other states have adopted regulations to control odors from industrial and agricultural operations. One major industrial source of lead located on the west side of the city caused Indianapolis to be one of the few cities that remained in nonattainment status for this pollutant. The county came into compliance for lead after 1999. Following a period when it met acceptable O3 levels after 1988, the EPA declared that Marion County had attained the O3 standard. It has never had to adopt highly unpopular mandatory automobile emissions testing, though there have been some intermittent O3 nonattainment issues in the 2000s for which Indianapolis did not meet National Ambient Air Quality Standards (NAAQS) set to protect public health.

Despite efforts of the city, the Indiana Department of Environmental Management (IDEM), and the U.S. Environmental Protection Agency (EPA), Marion County continued to be classified with a nonattainment status through 2019. SO2 emissions in Center Township continued to be a particular problem from 2013 to 2019. Indianapolis Power And Light (IPL) in 2014 finally began to convert its coal-fired power plants to natural gas with the aim of reducing SO2 emissions and that of other pollutants. IPL committed to reducing its overall dependence on coal from 79 to 44 percent by 2017. In April 2020, the EPA and IDEM announced that Marion County finally had attained the 2010 SO2 air quality standard, and three years of monitoring data showed that NAAQS also had been met. 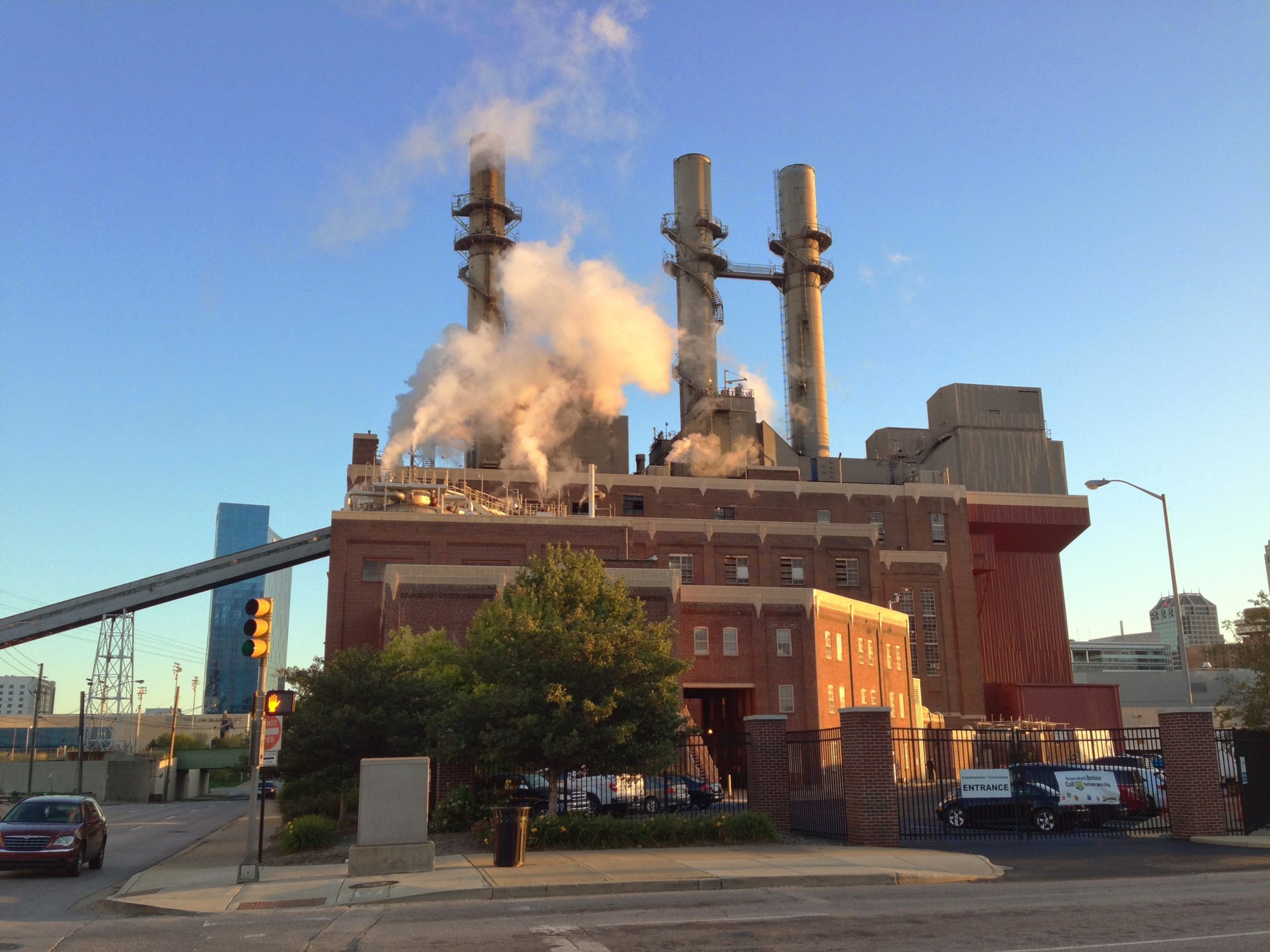 However, in June 2021, the American Lung Association ranked the Indianapolis-Carmel-Muncie area as the 13th worst in terms of high yearly average particulate matter levels in the country. Particulate matter is caused by the burning of fossil fuels both in energy plants and by cars or other engines. While invisible to the naked eye, particulate matter can have serious health impacts on people exposed to it for long periods of time. The average person can lose as much as two years of life when exposed to bad air due to high levels of particulate matter.

Indianapolis has two high-tech air quality monitors that measure all the major pollutants and another half dozen that record a few of the pollutants tracked by the Environmental Protection Agency. Though particulate matter pollution can come from sources such as burning leaves in a backyard to a large energy plant, much of it comes from cars. Indianapolis residents drive more miles per capita than any other large U.S. urban area, according to the U.S. Department of Transportation.

Community efforts such as the investment in green space, trees, and parks help to mitigate air pollution. Organizations such as Keep Indianapolis Beautiful plant trees in neighborhoods needing them the most. Those neighborhoods are identified by their proximity to highways. In Indianapolis, research has shown that people living on the south end of the Monon live 12 to 13 years fewer than someone living on the north of it in part due to degraded environmental air quality.