In a scandal that rocked the sports world, top executives at one of America’s most prominent Olympic organizations, USA Gymnastics, headquartered in Indianapolis, failed to alert authorities to many allegations of sexual abuse by coaches. Even after receiving warnings, they relied on a policy inadequate to prevent the abuses or sanction the abusers. 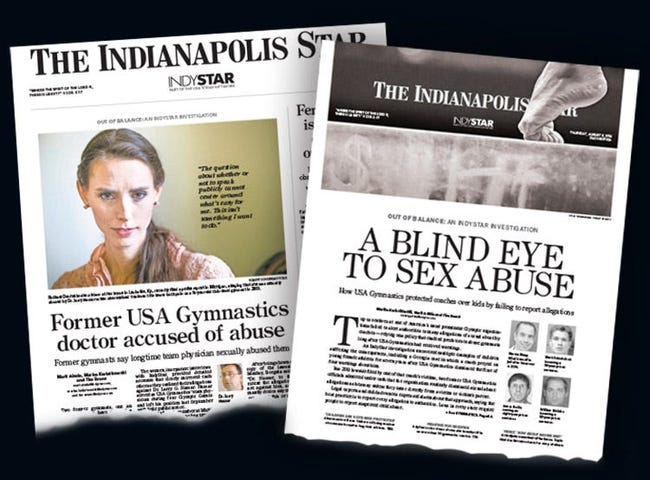 In 2013, a victim of the abuse filed a lawsuit, and former officials of the amateur sports governing body admitted under oath that the “organization routinely dismissed sexual abuse allegations as hearsay unless they came directly from a victim or victim’s parent.” This policy alarmed legal experts and child advocates, who pointed out that laws in every state required people to report all suspected cases of child abuse. Yet USA Gymnastics did not alter the way that it approached alleged sexual misconduct.

In 2016, an Indianapolis Star investigation, in a series called “Out of Balance,” revealed this USA Gymnastics policy for handling sexual abuse allegations and showed how predators exploited a lax culture to prey on children.

The newspaper also published allegations of abuse by former USA Gymnastics team doctor Larry Nassar, who also worked at Michigan State University. As a result of the series, about 500 women and girls came forward with similar allegations against Nassar, a prominent sports physician. Nassar pleaded guilty to criminal charges and in 2017 received a 57-year prison sentence for his crimes.

The Indianapolis Star’s investigation spurred a new federal law in 2018 that makes it a crime for national governing bodies to fail to immediately report sex abuse allegations.

The series and its aftermath also led to multiple congressional and criminal investigations into the actions of other agencies and individuals. USA Gymnastics President and CEO Stephen Penny resigned and was later charged with tampering with evidence. Several Michigan State University officials, including the dean of the College of Osteopathic Medicine and the university president, were charged with crimes involving the cover-up.  The university later reached a $500 million settlement with the victims of Nassar’s abuse.

The USA Gymnastics’ board of directors resigned in the wake of the scandal, and in December 2018, the organization filed for bankruptcy. Li Li Leung, a former gymnast and a vice president for the NBA, became president in 2019 to “make things right with Larry Nassar’s survivors” and to guide USA Gymnastics out of bankruptcy.

In 2020, former gymnasts who had been sexually abused rejected the amateur sports governing body’s $217 million settlement offer. They rebuked USA Gymnastics for offering only money and not answering questions about how such widespread abuse was allowed to happen. They wanted as much information released as possible and to press for sweeping policy changes to ensure that would curb future abuses.

A U.S. Department of Justice internal investigation released in mid-July 2021 sharply criticized the FBI’s handling of the case. Agents in charge of the Indianapolis office did not investigate the allegations for 8 women, during which time over 100 women gymnasts suffered sexual abuse.