Folklore and urban legends manifest themselves in various genres or categories such as tales, legends, songs, beliefs, and customs. The legend is a secular tale—an apparently factual account believed to be true of an unusual or extraordinary event in the lives of otherwise ordinary people. They have the remarkable ability to migrate from one location to another, attaching themselves to local places and people.

Few legends or folk tales are unique to Indianapolis. For example, the tale of the Indianapolis couple who “adopts” a puppy while in Florida only to discover, after the violent death of their cat, that their new pet is an Australian swamp rat. The rat is then supposedly housed at the Indianapolis Zoo. The same legend is found in Chicago, except the animal is at the Brookfield Zoo.

Crown Hill Cemetery is the location of several legends of local interest, although these stories too have counterparts in other American cities. One narrative describes a young woman with a baby in her arms who was unable to find her way out of the cemetery at closing time. She finally wandered to the fence on 38th Street, but no passersby came to the aid of the wailing woman within the cemetery. 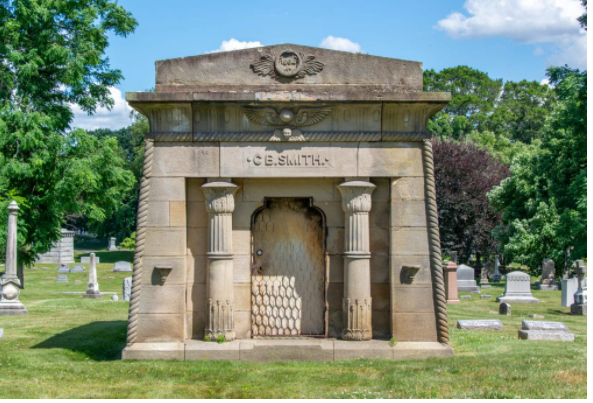 Another Crown Hill Cemetery legend concerns the CALEB BLOOD SMITH sandstone mausoleum, erected in Egyptian architectural style. It is believed by some that its “fire-blackened” appearance was caused by members of the Black community at the turn of the century, when they gathered at the gravesite and lit fires believing that this would keep the spirit of a conspirator in the Lincoln assassination from coming out and haunting the city (see Civil War Treason Trials). Interestingly, no Hoosier is known to have been involved in the Lincoln assassination. Instead, history records that Smith was Indiana’s first presidential cabinet member. He was Abraham Lincoln’s secretary of the interior and his friend.

Although the mausoleum bears his name, Smith’s remains were never placed there. Adding further mystery to the mausoleum’s history and legend, his exact place of burial is unknown.

“The Ghost of Crown Hill Cemetery,” “The Woman in White,” or “The Ghostly Hitchhiker” are other local variants of widespread folk ghost stories. In nearly all the versions, a teenage girl dressed for the prom is standing near the corner of 38th Street and Dr. Martin Luther King Jr. Boulevard soaking wet from the falling rain, when a young man offers her a ride home. She accepts and gets into the back seat of the car. The girl gives the boy an address, and upon arrival the boy turns around and the girl has disappeared, but the back seat is still wet. The driver goes to the door and explains the situation to the woman of the house, who becomes disturbed when the boy points to a photograph of the girl. The woman says that was her daughter and she died the night of the prom six years ago.

Legends of haunted houses in Indianapolis are recounted regularly. Many of the narratives about these structures consist of unexplained phenomena: footsteps, moans and groans, strange odors, or corners that defy heat. Occasionally reports suggest that a poltergeist haunts the structure, peppering the exterior of the house with rocks or tossing about the interior contents of the house.

Hannah House on the south side of the city at 3801 Madison Avenue is said to have been used as a station on the Underground Railroad for smuggling enslaved individuals out of the South to Canada prior to the Civil War. In one account, fire spread through the basement when a lantern was overturned, killing many of the fugitives before they could escape. Another version has them dying in the basement without any mention of the fire. In both versions, the victims were buried in the basement or on some of the original acreage. Legend has it that these souls still roam the house and grounds, restless and frustrated that they were never able to attain their goal of freedom.

Skiles Test is rumored to have kept his wife in a glass casket in this part of the House of the Blue Lights, n.d.
© Gary Ledbetter
View Source

Perhaps the most famous haunted house in Indianapolis is “The House Of Blue Lights,” where millionaire Skiles E. Test lived. Rumors and legends about the house began in the 1930s and include narratives about an old man who preserved his first wife in a glass coffin surrounded by blue lights. Another version has Test’s wife on a sarcophagus in an airtight room. Despite all efforts to play down the validity of the legends, the narratives continue to be recounted, even after the house was demolished in 1978.

More recent Indianapolis legends include the Indiana Repertory Theatre (Irt) and the Indianapolis Athletic Club. In 1991, the director of the IRT, Tom Haas, was struck and killed by a van while out on a run. Since his death, it has been rumored that his spirit haunts the building, jogging around the mezzanine on cold and rainy days. The Indianapolis Athletic Club suffered a fire in its third-floor ballroom in 1992. Three people perished in the fire, and since, there have been reports of the ghost of a young man trying to wake people up.

A different sort of folk legend surrounds the former St. Joseph’s Catholic Church, built in 1879. The church was closed in 1949 due to a lack of attendance but remained a Catholic community center until the property was sold in 1986 (see St. Joseph). The story, passed around orally, tells that many worshipers at the parish experienced a Stigmata, the replication of the wounds of Christ in Christian belief, with blood appearing on their hands.

The Indianapolis 500-Mile Race, with its festival-like atmosphere, has produced colorful legends and anecdotes. There is, for example, “The Mobbed Motorist,” who while passing through town was unexpectedly caught in race day traffic and pulled by the stream of cars into the infield. The tale of the “500 Festival Princess,” who poses nude for a magazine photographer in a Gasoline Alley garage. Another tale describes “The Good Luck Rabbit” that regularly appeared on the track at starting time.

Scholars characterize Hoosier folklore as “a part of the main,” a regional variant of American folklore. Likewise, legends and stories of Indianapolis reflect its state and midwestern roots and especially its similarities with the folk culture of the region’s cities.