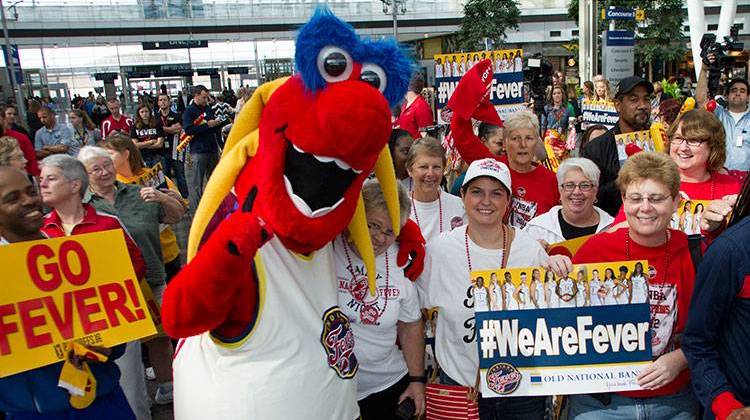 On June 7, 1999, Indianapolis was joined by Miami, Portland, and Seattle as cities awarded WNBA expansion franchises to begin to play in 2000. Kelly Krauskopf, who later became assistant general manager for the Indiana Pacers, was the team’s first chief operating officer and Anne Donovan, a Naismith Basketball Hall of Famer, its first head coach.

The Fever qualified for the postseason in 13 of 21 seasons, including a 12-year stretch from 2005-2016, advancing to the WNBA Finals in 2009, 2012, and 2015. On October 21, 2012, Indiana defeated the Minnesota Lynx 87-78 to win the WNBA Championship. It was the first professional basketball title won by an Indianapolis team since 1973 when the Indiana Pacers were champions of the American Basketball Association. Nearly 3,000 fans gathered to honor the WNBA champions in downtown Indianapolis, and the Fever visited the White House the next year to be honored by President Barack Obama.

With the third pick in the 2001 WNBA Draft, the Fever selected Tamika Catchings from the University of Tennessee. After missing the 2001 season due to injury, Catchings debuted in 2002 and instantly became one of the most dominant players in league history. From her first game in 2002 until her retirement in 2016, Catchings became a 10-time WNBA All-Star, 5-time WNBA Defensive Player of the Year, 4-time Olympic gold medalist, 2-time Dawn Staley Leadership Award winner, WNBA Finals MVP in 2012, WNBA MVP in 2011, and the WNBA Rookie of the Year in 2002. She spent her entire career with the Fever, leading the team to a WNBA title in 2102.

When Catchings retired in 2016, she exited the WNBA as the all-time leader in rebounds, steals, and free throws made. As of 2021, she remains the only player in WNBA history to surpass 1,000 steals with 1,074 in her Fever career. Catchings holds the title as the third leading scorer in WNBA history with 7,380 points, third-leading rebounder with 3,316 rebounds, eighth in assists with 1,488. The team retired Catchings’ jersey number, 24, in 2017, the only player in franchise history to hold this honor.

Catchings became vice president of Basketball Operations and general manager in 2019, but the accolades continued. In 2020, she was elected to both the Naismith Hall of Fame and the Women’s Basketball Hall of Fame.

The Fever played every home game in the first 20 years at Gainbridge Fieldhouse, with the 2020 season shortened to 22 games by the pandemic.

Catchings stepped down as the Fever’s general manager and vice president of basketball operations in February 2022.