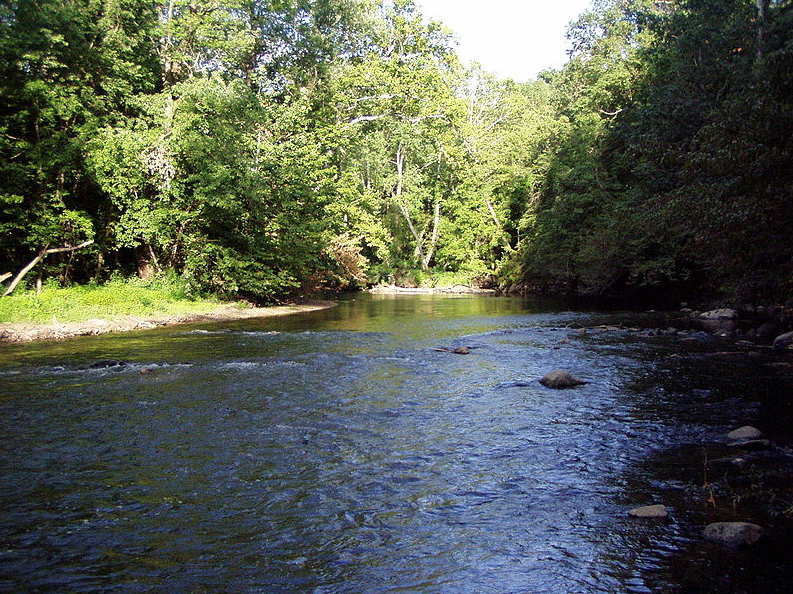 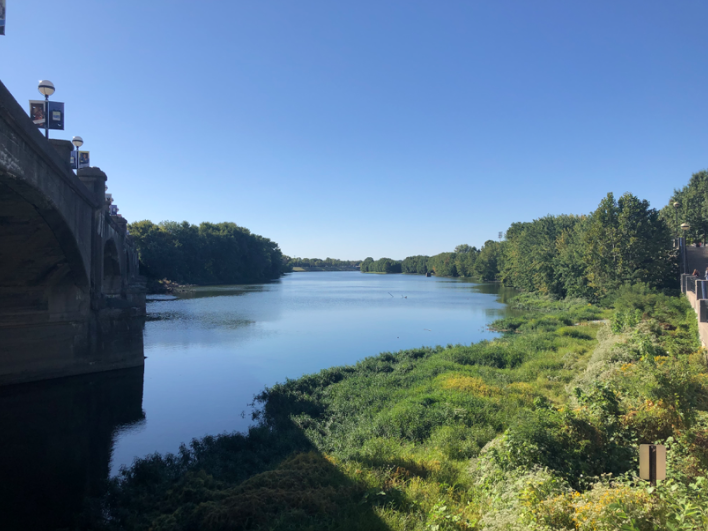 The West Fork of the White River runs through Indianapolis before joining the East Fork and then the Wabash River in Illinois. The river existed before Wisconsin glaciers arrived 70,000 years ago and drained the southernmost reaches of the Laurentide Ice Sheet. 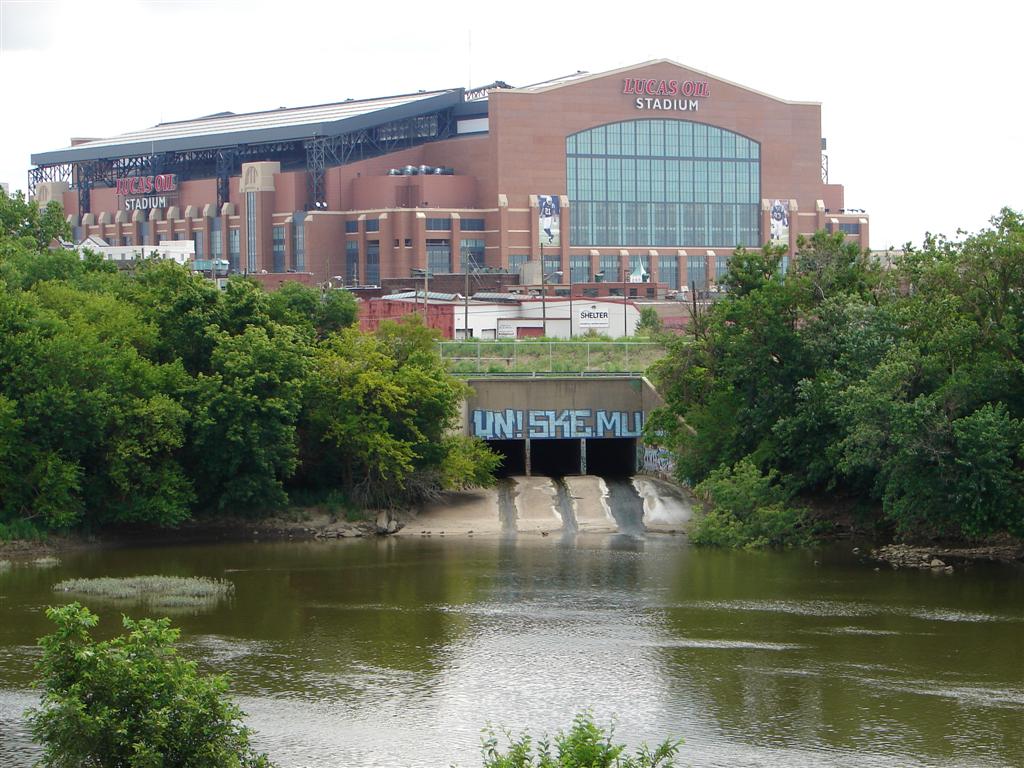 This urban stream begins on Indianapolis’ east side, runs through a tunnel south of Downtown, and empties into the White River near Kentucky Avenue.

This map shows areas with a one percent chance of flooding each year. Note the large extent of flooding possible along the White River north and south of Downtown, while levees and channeling would allow the White River and Fall Creek to stay within their bounds even during a 100-year flood event. Still, this map does not show the immense damage that would be caused by the failure of a levee or a reservoir dam. 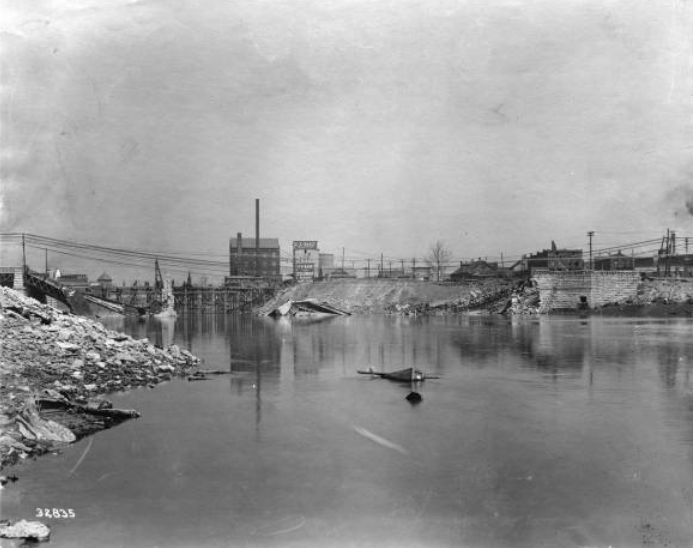 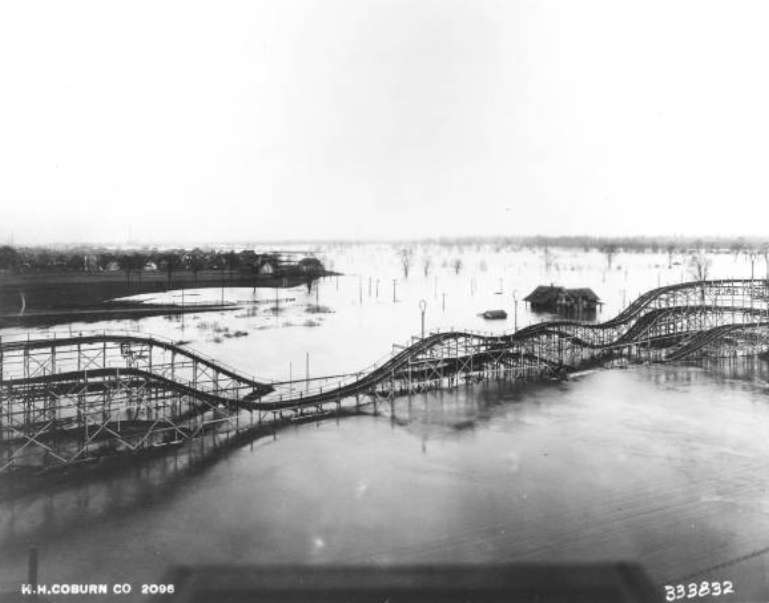 The most disastrous flood in Indiana history swept the state in March 1913. Six inches of rainfall drenched Indianapolis over a five-day period that began Easter Sunday, March 23, 1913. As the White River crested, levees failed, sending torrents of water rushing through the city. Bridges were washed away, water supply was shut down for days, and transportation ceased.

Some areas in West Indianapolis were under 30 feet of water, and only the roofs of two-story houses were visible above the floodwaters. Thousands were left homeless, and a massive relief effort was organized at both the local and state levels.

Our modern way of life, from the infrastructure that makes Indianapolis the Crossroads of America to the rich soils that power our strong agricultural sector, is built on millions of years of geological history. Here is that story. 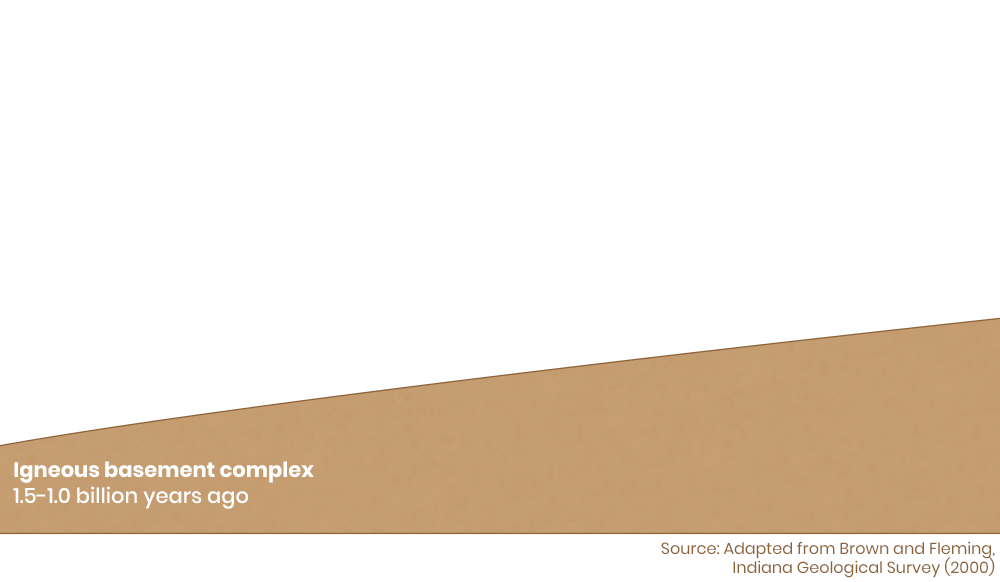 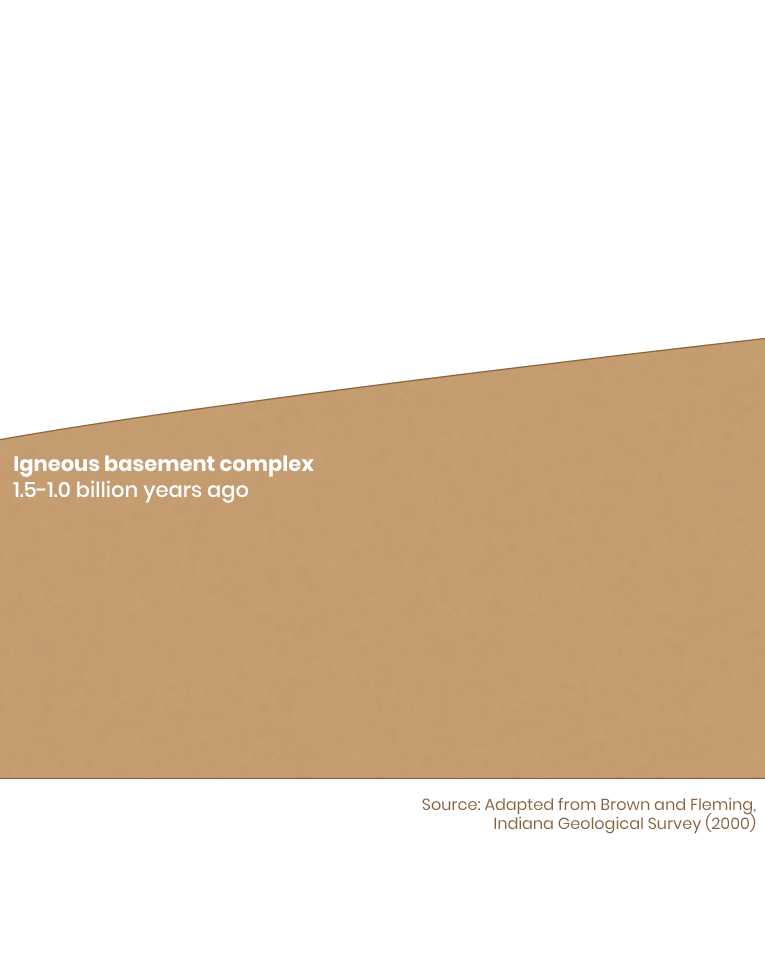 Indianapolis sits in the center of the continent in an area called the craton. While the edges of continents are more tectonically active, generating mountains and earthquakes, the stable craton is calm.

This portion of the continent was not always stable, however. From 1.5 to 1.0 billion years ago, the craton experienced a tectonically active period. The basement complex are the lowest layers of our bedrock, ranging from a depth of 3,500 to 20,000 feet. These layers are formed from igneous and metamorphic rocks. Igneous rocks form from volcanic activity and metamorphic rocks have been transformed by extreme heat and pressure, meaning this calm prairie landscape was once the site of violent tectonic shifts and volcanic eruptions. 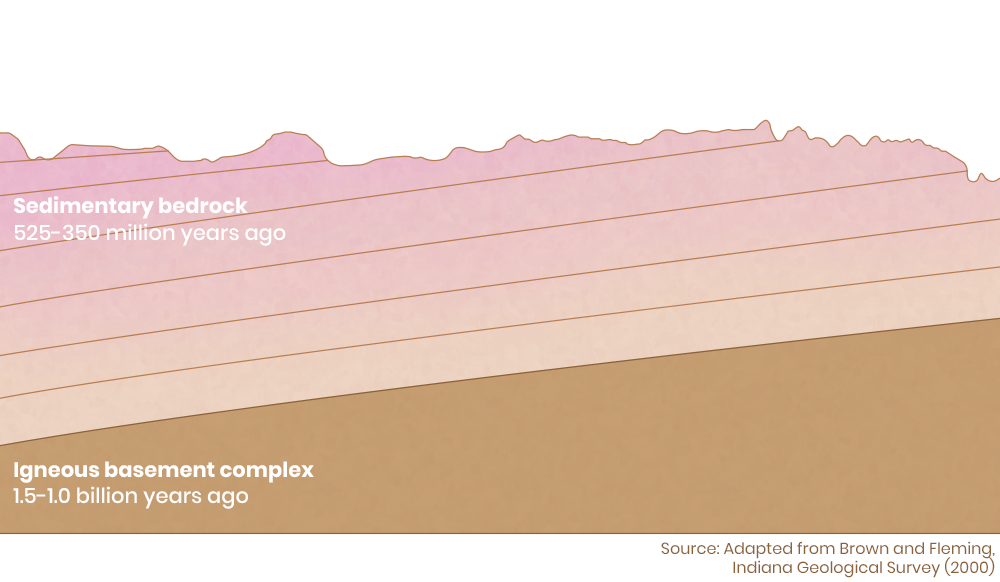 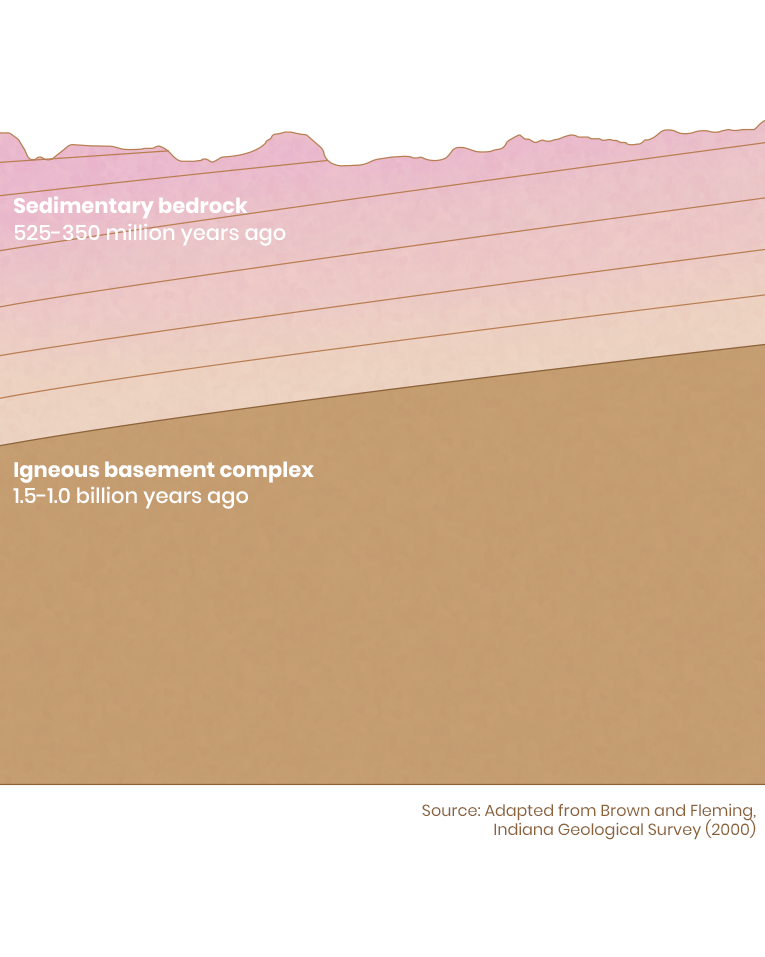 In the next several hundred million years, sedimentary rock would form from the erosion of nearby mountains and the silt at the bottom of an inland sea. At this point, the Midwest was near the equator. Lush forests grew along the seashore and coral reefs grew in the clear water. Indiana’s famous limestone deposits were formed when the shells and skeletons of these sea creatures were deposited on the sea floor, dissolved, and reformed over hundreds of millions of years. Carbon-rich deposits like decomposing shoreline forests created Indiana’s coal deposits. 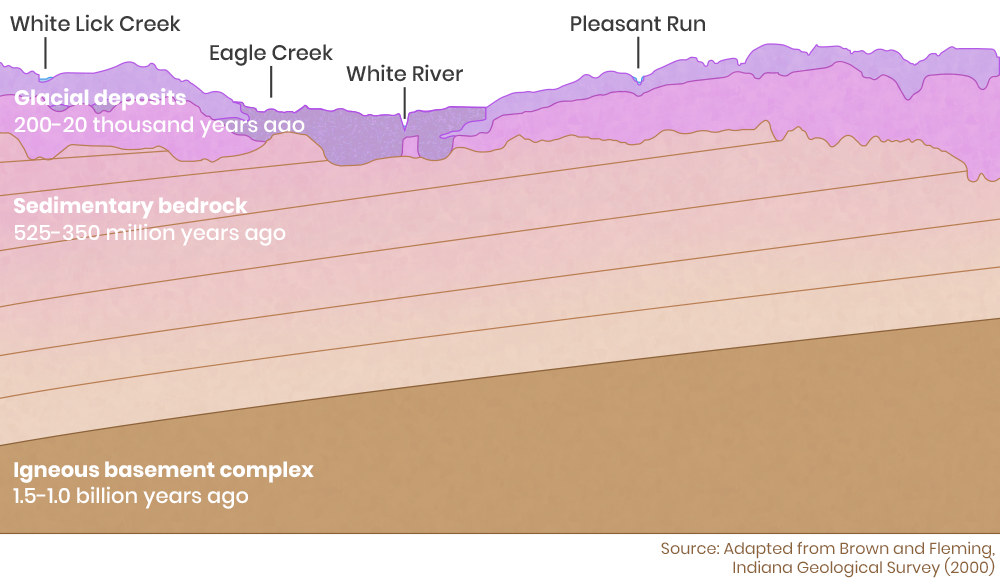 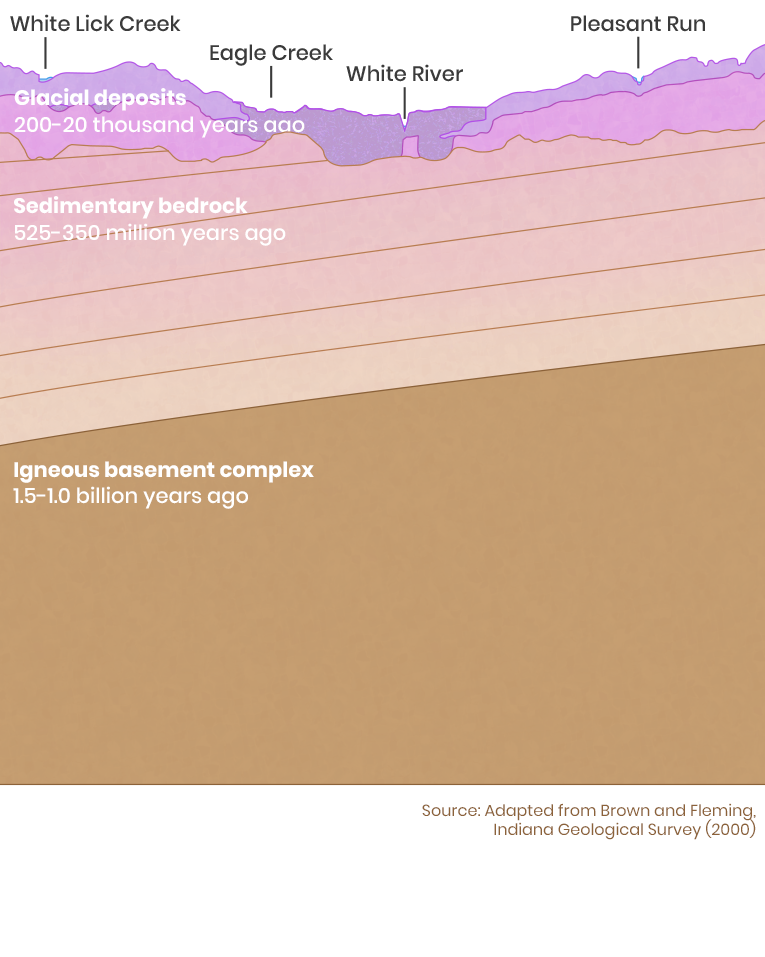 The surface landscape that we see now was created during the Ice Age, the Pleistocene Epoch that began 2.6 million years ago. A massive glacier, called the Laurentide Ice Sheet, flowed into Indiana from the Lake Huron and Lake Erie basins.

The glacier grew and melted repeatedly as the climate shifted. The flowing glacier eroded land, contributing to Central Indiana’s flat topography, and the melting glacier deposited nutrient-rich silt and soil. These glacial deposits are 100-200 feet deep in much of Marion County. Melting water from the glacier was carried away by the White River, which at times flowed underneath thousands of feet of frozen ice. 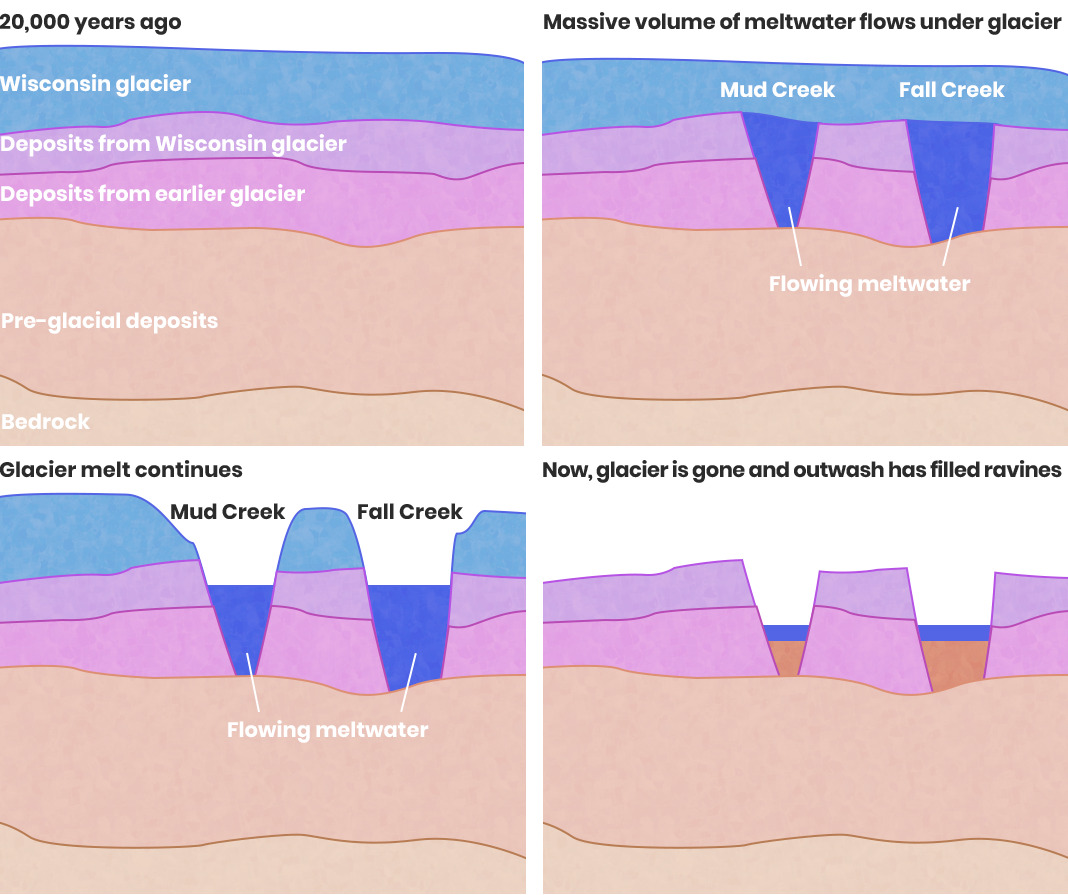 The Fall Creek Gorge that runs through Fort Benjamin Harrison State Park is the result of a glacial feature called a tunnel valley. It was formed entirely below the glacier that covered Marion County in the Ice Age. Melting water flowed out of the underside of the glacier, cutting a deep valley and washing away 150,000 years of glacial deposits. As the glacier melted, Fall Creek was eventually exposed to the air. Sediment from the melting glacier washed into Fall Creek, filling the valley floor and reducing the depth of the gorge.

The surface landscape is defined by how far the Wisconsin glacier reached.

This map shows the time period when the rocks, soil, and gravel we see on the surface were deposited, along with elevation. In areas where the glacier reached, land is relatively flat. Ancient hills and valleys have been covered with Wisconsinan glacial deposits from around 20 thousand years ago. Riverbeds are lined with newer alluvial fill, rocks and sediment carried by the flow of water in the thousands of years since the glacier retreated.

Past the glacier’s southern limit, the terrain is hillier. Much of the surface geology is from the Pre-Wisconsinan period, when an earlier glacier, called the Illinoian, carved the bedrock and left deposits.

The Illinoian glacier never reached the hills of south-central Indiana. In places like Brown County and Bloomington, older bedrock from the Late, Middle, and Early Mississippian periods is near the surface. This is silt and shale, formed in an ancient river delta where silt and sand from the Appalachian Mountains were deposited in an inland sea, or limestone, formed from seashells and coral reefs. In the ensuing hundreds of millions of years, tectonic activity pushed the area above sea level, while water eroded the soft bedrock into hills and valleys.

Geology information was sourced from the Encyclopedia of Indianapolis and the Indiana Geological Survey. The floodplain map is provided by Indiana Department of Natural Resources.